EJ Swift, Osiris (dystopian-future SF; takes place in the 2300s; the people who live in a city purpose built to survive the coming climate disaster and a number of man-made plagues, etc now believe it is the last outpost of humans in the world; at the same time they haven’t learned anything about cooperation; reminds me a bit of China Miéville’s The City and The City)

Louis-Auguste Blanqui, Eternity by the Stars (post-Paris Commune cosmology from a prison cell; more depressing in some ways than Nietzsche’s vision of the eternal return, yet, as Sean Bonney notes re this book, “Within an infinite universe, defeat is always inevitable, but so also is victory.” Somewhere, somehow …)

Corneluis Castoriadis, The Imaginary Institution of Society (post-68 semi-post-Marxist/Lacanian thought piece for revolutionaries on how to move forward after all the revolutions of the c19 and 20 have collapsed; written in the 70s, and goes well with D&G’s Anti-Oedipus, Lyotard’s Libidinal Economy, etc)

Simon Jarvis, The Unconditional (book-length contemporary “Cambridge school” poem, an epic sort of series of digressions but with a subtle forward movement; reminds me in a way of Rachel Blau DuPlessis’s Drafts)

John Edgar Wideman, My Soul Has Grown Deep (anthology of African-American autobiographies from the mid-c18 thru the Harlem Renaissance; I just read about the founding of the first AME church, and was struck by the fact that its charter was voted on by the male members ONLY of the congregation; it apparently never occurred to the men that tho they had been discriminated against by the white methodists, they were now in turn discriminating against women; yes, it was the c18, but Mary Wollstoncraft lived in the c18 … I wonder how long it will take humans to learn all we have to learn …)

Benoit Peeters, Derrida (biography; very good; did you realize that Derrida was not “white”? I’ve never thought about his obsessions in terms of his personal and generational history so much before)

Cyprian Broodbank, The Making of the Middle Sea: A History of the Mediterranean from the Beginning to the Emergence of the Classical World (archaeology; brilliant; scary – I mean, I think sentences like, “Nothing much changed vis-à-vis tool making for the next 400,000 years” have something terrifying about them) 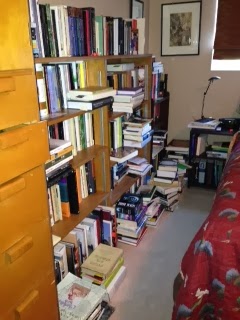 The only comment I want to make about these is: can you believe that I have NEVER read Charlotte’s Web??? 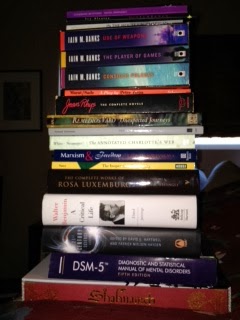 One of Many Stack of Books