[If you are a poet and would like to participate in this "Poetry and Money" Series, go HERE for information. John Bloomberg-Rissman previously responded HERE, and Jean Vengua HERE.]


A 3-Question Interview, A Sample Poem, and Book List Featuring

I've been a poet for twenty-five years, and a Buddhist for two; for now I'm working at a Buddhist retreat and study center for minimum wage. But it's a beautiful place up in the Rocky Mountains, and I get to meditate every day (but not write poems). Allen Ginsberg’s memorial is here, some of his ashes lie underneath. Before, I've done freelance writing, secretarial gigs, and teaching. Sort of gave up on all three; the first is like slave labor (not good for the wrists), the second sucked me dry (creatively, emotionally, mentally), and I only ever had one decent teaching job in many years of trying (I taught literacy to special needs kids). I'd like to start teaching at a Montessori school, but jobs are scare in Colorado (everywhere?).


2) How does your choice affect your process of making your poems?

I've been working at the Buddhist center for around five months, in the housekeeping department; at the end of a forty-hour workweek, I'm pretty beat—I don't write in the evenings very much. But I keep my notebook with me while I'm working, and usually on my weekend I write for several hours. Also, I took a writing workshop/retreat recently (lots of programs come through here, staff can take them free, as a perk—if your boss lets you), and that was really helpful. When I was freelancing, for the last 3 years before we came here, I'd write poems alongside of whatever technical/legal/marketing/junk writing I was working on. I wrote two chapbooks this way, and I kept my blog meticulously updated—I was always on my macbook, and never wanted to do the freelance work.


3) What would you consider to be the pros and cons of how you have earned your income?

Here at Buddha camp, the biggest benefit is that I show up to work in jeans and a cruddy tee shirt, and the whole community meditates together for the first hour of the day. The worst part of working here is that the place is deeply in debt and taking it out on the staff, in lots of penny ante ways, which I won’t lament here. Even a Buddhist center is not above eating its young to survive.

I should add that my husband and I live in an old, tiny, spunky RV. We decided not long after we met that we were going to avoid capitalism as much as we could—we didn’t want to pay exorbitant rent for a lousy apartment owned by a corporation, and we didn’t want to be wage slaves. Working freelance gigs is a grind, but you can do it from anywhere you have internet access; we’ve traveled a lot together, and we’ve documented where we’ve been. My husband has taken photos of most of the parking lots, RV parks, state parks, town parks, etc. where we’ve stayed, and I’ve written about them (in a piece called “hobo tally”). We’re already planning where we’ll go when we leave here, which is really exciting; in 2014 we plan to convert our RV to hydrogen. (I suppose this means I’ll pick up contract/freelance writing again, for a while; but I’ll be more choosy on the jobs I take). The con, I guess, is being broke, but we’ve never been so broke that we were hungry or without the means to travel. We’ve radically reduced the amount of stuff we own, and increased the stories we collect, and write. 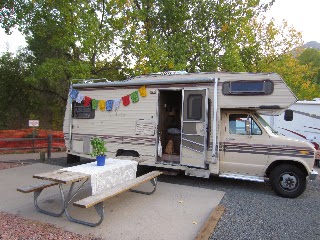 
At three p.m. I make the bed where I tried and failed to sleep all night.
It’s solstice, the least light and
sharpest of the earth’s four corners.
Four wheel tracks lace the dirty snow below my window.
Someone has parked badly, I reach into a shallow well and forgive them.
There is no more coffee or sleep today, the longest night's coming on and a bonfire invitation will be shrugged off.

In a week and change, a distant year arrives.

SOME CHAPBOOKS by ERIN VIRGIL:

HANDBOOK FOR WITHDRAWAL (at SitWithMoi, 2013)

Fantastic voyage to the ordinary planet (Dancing Girl Press, forthcoming in 2014; will post link when available)

Email ThisBlogThis!Share to TwitterShare to FacebookShare to Pinterest
Labels: Poetry and Money