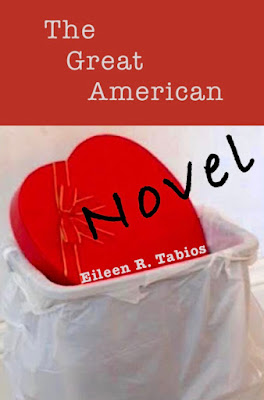 I'm grateful to Neil Leadbeater for his review of THE GREAT AMERICAN NOVEL. You can see the entire review at the just-released issue of the ever-outstanding Otoliths, but here's an excerpt:


“Mooring After Loss” (2016) demonstrates the close association that can sometimes be present between the word “image” and the word “imagination”. A camera has been positioned in such a way as to photograph someone walking across a floor. In the photograph we see the floor and a left foot (the one that is in the act of striding forward). The right foot is not to be seen but an outline of it has been drawn on a blank piece of white paper and placed on the floor beside the left foot. At first, I misread the title as “Mourning After Loss” and thought that the blank outline of the right foot represented the departed one but then I reread the title and recognized how important it is in a time of loss that we still keep ourselves anchored to the ground, even if it is only with one foot, so that we can keep moving on, one foot at a time. The soul of the departed one is always close to us, closer than we think, in our daily walk through life.

In this collection Tabios, always at the vanguard of poetic expression and invention, offers up a thoughtful fusion of text and image that is at once multilayered, satisfying and visual. Beneath the surface of her strikingly original artistry, she speaks out courageously against the horrors of injustice and makes a plea for all that is beautiful and tender in our fragile world. Fully recommended.

Posted by EILEEN at 8:54 PM No comments: 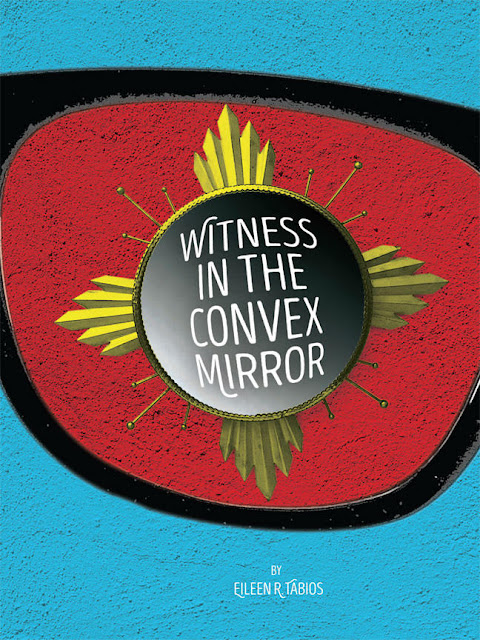 My latest book, WITNESS IN THE CONVEX MIRROR, is now officially released and available through me or the following spaces:

I hope you check out this book where much of what I've learned about the poem over the past two-plus decades culminates. Here's a description:

TinFish Book Description
When John Ashbery died in September, 2017, all the obituaries noted that he had been a member of the New York School of poets, that his roots were in western New York and that, despite living for a decade in Paris, his career had unfolded over many decades in the City. Ashbery was, indeed, something of a local poet, constantly using references from the places he had lived. Lost in the very local memorials, however, was the fact that Ashbery’s work also influenced writers in the Pacific, including writers of color. Eileen Tabios has taken up Ashbery’s influence and engaged in a project of “the browning of John Ashbery,” as she told Tinfish’s editor once. Using one or two lines at a time from Ashbery’s “Self-Portrait in a Convex Mirror,” (1976), Tabios inhabits Ashbery’s mode, while moving our focus of attention many thousands of miles west of New York City. Tabios, who grew up in the Philippines, studied and worked in New York City, and has lived in California for many years, appropriates Ashbery to her own ends. These include cultural appropriation, genocide, militarism, sexual and racial violence, art history, and many other interests she shared—or did not share—with the older white male poet. Witness in the Convex Mirror is a tense act of homage, one that draws Ashbery away from the region that is most comfortable with him, and into a place where the discomfort is palpable, but extremely generative.

Eileen Tabios cracks open Ashbery’s convex mirror to reveal a secret history of our times.   Her virtuoso riffs on Ashbery’s masterwork are no mere exercise, but open up into unexpected vistas—these poems “say ‘convex’ for widening / the gaze.”  That gaze is directed both inward and outward, offering glimpses of the quotidian life of those who find “mortality gazing back / at us from the bathroom mirror,” but also pulling back for a wide-angle view of a planet in crisis, chronicling “the body’s deterioration, ours and earth’s.”  These pages, like Ashbery’s, are filled with the pleasures of poetry, but Tabios resists the “preening that / negates the subject matter,” unafraid to peer behind the scenes of our lives in “the dim shadows / of a movie forged from the margins / of capitalism.”  The swerve of the convex mirror, allowing us a (brief) respite from confronting ourselves, is gradually replaced with an awareness of our complicity in the world reflected in the poem: “No one is / innocent in empire.”  What’s left to the poet is to be “the spy / in the house,” as Tabios’s formal inventions dig behind enemy lines to open up, however briefly, a space of plentitude: “I came into being, capacious and singing.”
— Timothy Yu, author of Race and the Avant-garde: Experimental and Asian American Poetry Since 1965

Posted by EILEEN at 2:39 PM No comments:

YOU'RE INVITED TO OKLAHOMA! 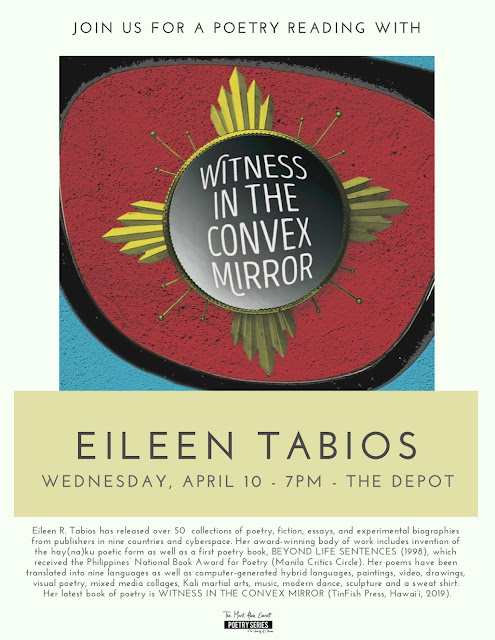 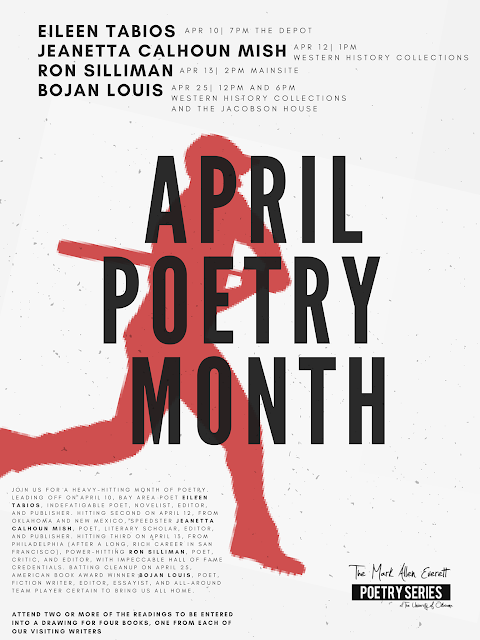