POPPING UP IN POST-CRISIS POETICS 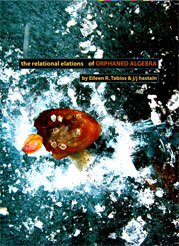 My and j/j hastain's collaborative book the relational elations of ORPHANED ALGEBRA is addressed in T.C. Marshall's essay, “A Secret Agent, a Spaceman, & a Talking Bear: ATheory of Doubling the Stakes in Poetry” for POST-CRISIS POETICS edited by Brian Ang. Here's an excerpt:


Eileen Tabios and j/j hastain have carried doubling into a collaborative text that combines her “sense of physicality” with hastain’s trans identity and “the idea of the poem as also a body,” all while working with her adopted son’s school life and the condition of orphaned bodies (v. my review in GR #20). This seemingly labyrinthine combination was for her “a useful scaffolding for managing personal biases and emotion so that they did not get in the way of creating the poem.” She ends this book with “A Poetics Fragment” that expresses the belief that a poem is “completed elsewhere” by others, beyond the poet’s realm of control, and that “one poem can have many different completions.” This is the essence of the noetic, where questionings and contradictions put off conclusions.

I thank the Reverend for the attention and recommend reading the entire issue of POST-CRISIS POETICS which was released last year but only came to my attention recently ... so perhaps you're newly hearing about it too.

Email ThisBlogThis!Share to TwitterShare to FacebookShare to Pinterest
Labels: Reviews of My Books, the relational elations of ORPHANED ALGEBRA 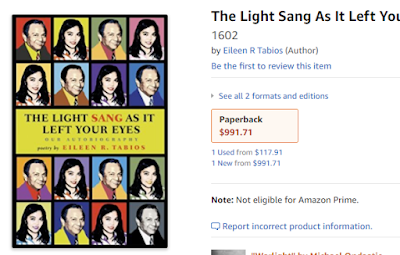 Right. In other publication news, I recently had the pleasure of “blurbing” these two manuscripts--here are the (unedited) blurbs:

OUTSIDE/INSIDE … Just Outside The Art World’s Inside by Martha King
Martha King’s writing brims with a forward propulsion that makes her memoir a page-turner, until you deliberately slow down to relish many passages. You end up appreciating a well-lived life, even if you are not familiar with all of its characters. She says early on that she, perhaps unfashionably for today, lived/lives a life (partly) in support of her partner rather than in self-focused exploration. That’s not something to criticize when her partner, painter-poet Basil King, manifests an integrity that earns any support for it. Besides, hindsight shows that Marthe ends up fulfilling her own potential as a poet and writer. The very last word of the memoir sums up Martha’s life — it is a word worth discovering in a book worth reading for her definition.

THE WET MOTORCYCLE: Selected Writings by Gregory Vincent St. Thomasino
When you collapse cause and effect between [1] image and/or narrative and [2] significance, you get something like Gregory Vincent St. Thomasino’s poetry. One hears of the “I” in the writing of poems but not so much in the “I” reading poems. What St. Thomasino’s poems effect then, for the reader, can be, not just the reader reading but, concurrently tracing some other’s response to what’s being read. A challenge. But when the reader’s receptiveness comes to fruition, it thus can be double—which is to say, more—satisfying than what’s considered a normative read. How fitting: who knows what’s normal in poetry except that it’s something to disturb? In such disturbance can be a widening in perception—and isn’t such partly what poetry is for?

* RUMOR by Elizabeth Robinson (perhaps my favorite among her poetry collections. Intimately piercing work. Adore its both rapture and ruptured self. LPR #280)

* MAN PRAYING, poems by Donald Platt (I rarely ascribe courage to another poet's work (even for wonderful work). But the matter of bravery came up in my read of Donald Platt's MAN PRAYING, and it was not just refreshing but bolstering. A feat. LPR #282)

THE BODY GHOST, poems by Joseph Lease (luminous and moving)

THIRTEEN WAYS OF LOOKING AT THE BUS, poems by Gizelle Gajelonia (witty and moving)

A DOG LOST IN THE BRICK CITY OF OUTLAWED TREES, poems by Geoffrey Gatza (an inventive premise!)

THE AGGRESSIVE WAYS OF THE CASUAL STRANGER, poems by Rosmarie Waldrop (how fun to see early poems (1972) by this master poet!)

* THIS WINDOW MAKES ME FEEL, poems by Robert Fitterman (evoked for me Jason Magabo Perez and Nicholson Baker)

* FABLE OF THE PACK-SADDLE CHILD, poetry by Mia Leonin and illustrations by Nereida Garcia Ferraz

* IS THAT THE SOUND OF A PIANO COMING FROM SEVERAL HOUSES DOWN?, poems by Noah Eli Gordon

*  DAY IN, DAY OUT, poems by Simon Smith

THE STRUGGLERS, poems by Norman Fischer

THE ROAD IS EVERYWHERE OR STOP THIS BODY, poems by Rosmarie Waldrop

SOME OTHER KIND OF MISSION, poems by Lisa Jarnot

* DEAR ANGEL OF DEATH, poems and prose by Simone White

* OF SOME SKY, poems by Joseph Harrington

* NOTES ON WOLVES AND RUIN, poems by Christine Hamm

* AT YOUR FEET, poems by Ana Cristina Cesar, Trans. by Brenda Hillman and Helen Hillman with Sebastiao Edson Macedo, Edited by Katrina Dodson

SEMIRAMIS IF I REMEMBER, poems by Keith Waldrop

THIS IS FOR THE MOSTLESS, poems by Jason Magabo Perez

* A CLEFT IN THE ROCK, poems by Marc Kaminsky

THE COORDINATES OF DOUBT, poems by Daniel Y. Harris and Rupert M. Loydell

MY BEAUTY IS AN OCCUPIABLE SPACE, poems by Anne Gorrick & John Bloomberg-Rissman

BORN IN THE YEAR OF THE BUTTERFLY KNIFE, poems by Derrick C. Brown

*  ALL THAT HELD US, poems by Henrietta Goodman

FOUR CUT-UPS or THE CASE OF THE RESTORED VOLUME, poems by David Lespiau, Trans. by Keith Waldrop

*  CHILD WITH A SWAN’S WINGS, poems by Daniel Shapiro

AN INSTANT OF FLIGHT, poems by Anne Heide

* ALL THE SPECTRAL FRACTURES, poems by Mary A. Hood

LIKE A FAT GOLD WATCH: MEDITATIONS ON SYLVIA PLATH AND LIVING edited by Christine Hamm

* A HANDBOOK OF DISAPPOINTED FATE, essays and poetics by Anne Boyer

PORTRAIT OF AN ARTIST, Hugo Huerta Marin's interviews of Marina Abramović, Tania Bruguera, Tracey Emin, Shirin Neshat, ORLAN, Yoko Ono, and Kiki Smith (an immensely satisfying read. Interesting (to me) to see how all answered one of the questions, "Where do you go to be alone." Yoko Ono and Kiki Smith were the ones to answer (as I would have), "I am always alone.")

OUTSIDE/INSIDE…JUST OUTSIDE THE ART WORLD’S INSIDE, memoir by Martha King

THE DUCHESS OF BLOOMSBURY STREET, memoir by Helene Hanff

SPINSTER: MAKING A LIFE OF ONE’S OWN, memoir by Kate Bolick

THE LADIES, novel by Sara Veglahn

THE POSTMISTRESS, novel by Sarah Blake

THE READERS OF BROKEN WHEEL RECOMMENDING, novel by Katarina Bivald

THE BOOKSTORE, novel by Deborah Meyler

Posted by EILEEN at 8:26 PM No comments:

Email ThisBlogThis!Share to TwitterShare to FacebookShare to Pinterest
Labels: Blurbs for Others, Relished W(h)ines, The Light Sang As It Left Your Eyes
Newer Posts Older Posts Home
Subscribe to: Posts (Atom)