GALATEA BIRTHS AND NOT JUST RESURRECTS! 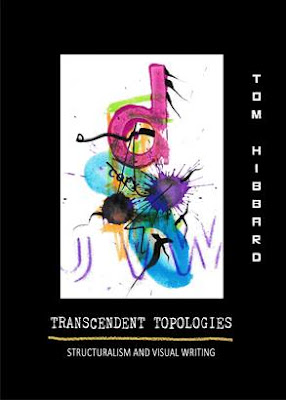 I just received Thomas Hibbard's new book, TRANSCENDENT TOPOLOGIES: STRUCTURALISM AND VISUAL WRITING, and was happy to see Galatea Resurrects responsible for first publishing seven of its 19 essays. Here's its Acknowledgments page which affirms GR's commitment to featuring deeply-considered work that might be ignored in a world of short attention spans: 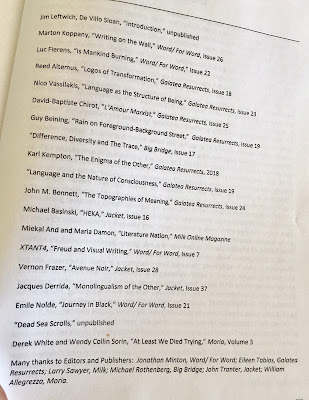 Do check out Tom's thoughtful way of engaging with visual poetry over at the Luna Bisonte site.

And this allows me to segue into announcing the May edition of GALATEARESURRECTS -- a shorter-than-usual edition to accommodate how I'll be traveling for nearly 3 weeks starting in a few days. You can go to http://galatearesurrects2018.blogspot.com but I'll cutnpaste the Contents below. Thanks as ever to our volunteer reviewers.

Is That the Sound of a Piano Coming From Several Houses Down? by Noah Eli Gordon
Reviewed by rob mclennan (5/6)

COMPENDIUM: a collection of thoughts on prosody by Donald Justice, edited by David Koehn and Alan Soldofsky
Reviewed by Patrick James Dunagan (5/5)