DOVELION, REVIEWED at UP THE STAIRCASE! 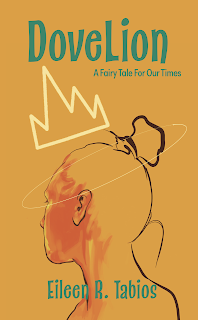 Deep gratitude to poet-essayist Elsa Valmidiano's new review of DOVELION: A Fairy Tale for Our Times. I'm reprinting entire review here from journal Up The Staircase as there seems to be an access problem with those who use Norton as their internet security (you can try to see review HERE):

The Battle Against Total Erasure: Review by Elsa Valmidiano.

From acclaimed poet, Eileen R. Tabios, comes her epic first novel, DoveLion: A Fairy Tale for Our Times, from AC Books, April 2021, a novel of erotic encounters, political intrigue, meta literary references, and ancestral/indigenous exhumation.The fictional setting of Pacifica, many might argue, is a caricature of the Philippines itself, recovering from a Marcos-esque regime, or really any country that is still reeling from dictatorship trauma. This could very well include so many countries across the world, where present day’s Jair Messias Bolsonaro comes to mind and his aggressive moves to open up the Amazon rainforest to commercial development, threatening the current homes of Amazonian tribes, just as Ferdinand Marcos from 1972 to 1986 displaced 300,000 Moro people in Mindanao through a combination of “hamletting” and community takeovers, while refining extrajudicial killings against indigenous communities to help foreign mining corporations secure a foothold on their lands. Hamletting is the clearing of an area of an alleged rebel presence and maintaining a military presence to keep them out. Tabios paints such a caricature of Pacifica’s dictator, eerily reminiscent of the former dictator of the Philippines, Ferdinand Marcos himself. As one can additionally see today, despotic power is still evident during Rodrigo Duterte’s reign against the indigenous Lumad. And so the modern fairy tale, or shall we call it modern day history, goes on and on.As evident in Tabios’ poetic prose, the strategic opening lines do not go unnoticed as she reiterates the echoed lines from paragraph to paragraph, “Once upon a time,” staging an irony as if the events in the novel reveal what is happening now, not far away, but now, so that “Once upon a time” becomes a poetic refrain of a story or song to be repeated and remembered. In its own way, the repetitious lines from her storytelling remind me of Filipino folk songs and ballads I grew up knowing, as if they are memory tools, so that in reading “Once upon a time,” Oral Tradition of our own nuanced ancient storytelling is reflected back at us, not memorialized in spoken word and song this time, but in written text.  Between the erotic and vulnerable exchanges between protagonists, Elena Theeland and Ernst Blazer, Tabios not only captures the intensity of these would-be enemy-descendants, but poses the question, “How do descendants of enemies forgive, love, and move on?” Philippine history itself reveals this repeating betrayal among brown brothers, such as Diego Silang, a young Ilocano revolutionary leader who dared overthrow Spanish rule in the 1760s, and was killed by his own friend whom colonizing authorities paid to assassinate. And somewhere out there, the descendants of victims and executioners possibly coexist—in the Motherland? in the Diaspora? Could they be close friends, even lovers, and not know it?Tabios’ love story, if we could call it that between Elena and Ernst, would fall under a Romeo and Juliet motif, but one in which Tabios digs even deeper to reveal the political seeds and upheaval that would have made Ernst completely unforgivable in Elena’s eyes, begging the question: How do we escape the sins, hatred, and bitterness of our fathers, and if so, is it possible to work together to overthrow a totalitarian regime?Tabios also playfully drops meta literary references like hidden Easter eggs throughout her text, where the title itself, DoveLion, the true name of Pacifica before its dictator changed it, also closely resembles twentieth century Filipino poet, Jose Garcia Villa’s pen name “Doveglion,” a combination of the words “dove,” “eagle,” and “lion,” which he believed was his true persona. In another instance, the main protagonist Elena comments on Tabios as if the story existed entirely apart from the storyteller herself. Tabios also plays on names throughout the novel, such as “Baybay” for “Babaylan,” the honorary title given only to the Philippines’ precolonial matriarchal governing high priestesses.Even as Tabios paints Elena’s naïve love for Wikipedia for research and information, Tabios does not undervalue the weight of magic, dreams, and ancestral knowledge. It appears that kind of knowledge can be innate before resorting to online research and documentation where room for inaccuracy by an unreliable online contributor is always probable and suspect.As Elena learns she is indeed Itonguk, a fictional indigenous tribe of Tabios’ fictional Pacifica, the novel takes on an interesting commentary regarding the modern Filipino’s own clouded tracing to their indigenous roots as we wonder what makes us different from the indigenous tribes and are we not a part of them, or at least acknowledge that we once were? Just as Ilocana revolutionary Gabriela Silang was not only Ilocano—her mother was Itneg—the protagonist’s own discovery of her indigenous heritage suddenly makes a difference in Elena’s revolutionary fight for the preservation of who we truly are, not just as interracial colonized modern-day products of our white colonizers and indigenous ancestors who have been ruled by a dictator—brainwashed by a colonial mindset—but that there are significant distinctions to be made between indigenous communities so that we may fully understand our own ancestry as well as build solidarity in our archipelago and Diaspora as a whole.As Elena addresses the spirit of her Itonguk mother, reclaiming her ancestry, identity, and self in the face of indigenous erasure:      “I feel you in that space where there’s no past, present or future—there’s only a single all-encompassing moment where you and I are not separated” (276).​Sans the blood of Spanish and other white invaders like the British and Americans intermingled into our own present-day DNA, it seems Tabios reminds modern-day Filipinos that indigenous blood and magic is who we used to be—or, may I dare say, always are—and that is worth fighting for in not only battling subjugation, but that we do not fall into total erasure and ethnic homogeneity by not knowing exactly our roots.

Elsa Valmidiano is an Ilocana-American essayist and poet whose ancestral roots hail from La Union through her mother and Ilocos Sur through her father. Elsa is the author of We Are No Longer Babaylan, her debut essay collection from New Rivers Press. Her book reviews appear in Poetry Northwest, The Collidescope, and Bridge Eight. Her poetry and prose appear in Cosmonauts Avenue, Anomaly, Cherry Tree, Hairstreak Butterfly Review, among many others. Her work has also been widely anthologized. She holds an MFA in Creative Writing from Mills College and has performed numerous readings. Her work has been nominated for Best of the Net and the Pushcart Prize. On her website, slicingtomatoes.com, Elsa curates a directory of Pinay visual artists from the Philippines and Diaspora whose work she features alongside her poetry and prose.

Email ThisBlogThis!Share to TwitterShare to FacebookShare to Pinterest
Labels: DOVELION, Reviews of My Books

ON SEPARATION ANXIETY BY JANICE LEE

Whenever I read a Janice Lee book, I always become conscious of form and structure. In this way, she’s a writer’s writer or a poet’s poet in that she provides a full, satisfactory experience to readers who happen to be writers. Her new--and, hard to believe, debut--poetry collection, SEPARATION ANXIETY, provides this consistent pleasure. Specifically, I am reminded how even in a poetics world where anything/everything is poetry, there can be difference(s) between prose and poem. In the latter, the caesuras—visible and invisible—are more heightened (as they should be) to maximize reader engagement between each word and/or line: if there is to be didacticism, leave that to prose. This also is an achievement given what both her prose and poems share: a philosophical bent that entails discourse.

In addition, to finish reading SEPARATION ANXIETY is to realize that Janice Lee accomplished what the best poetry collections achieve: what Lorna Dee Cervantes calls “the final poem” through the coming together of viably-individual poems. All of the poems, together, create a larger sum in the sense that 1 + 1 equals not just 2 but 11 (the visual here being a metaphor of other layers beyond the literary). Here are example poems below from her book that, individually, provide pleasure and yet also collaborate with other poems to form a book that on its own is structured as one poem.

Bonus shots of my kitten Addie enjoying the book under the warmth of a winter sun. 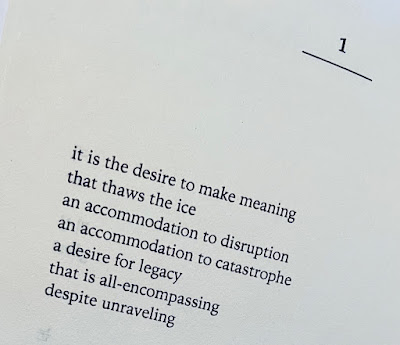 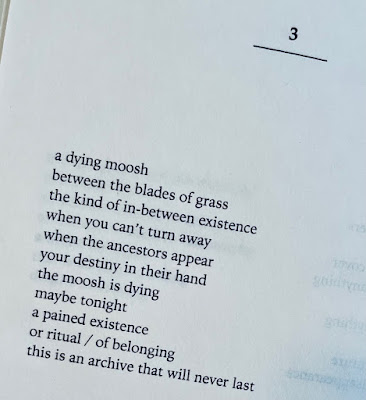 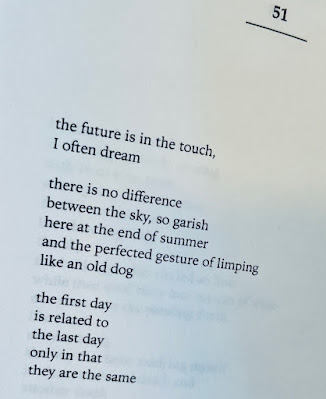 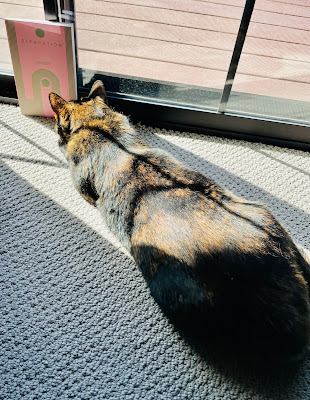 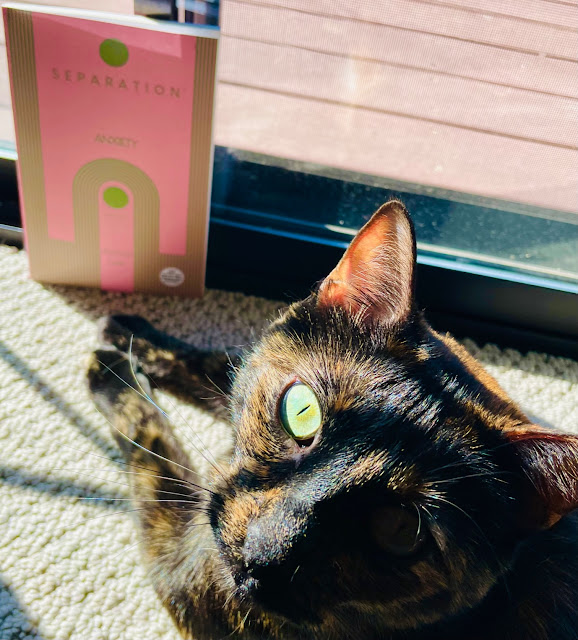