I've never been there, but I love Brussels. Which is to say, as soon as online publishing became possible, I glommed onto that train! Recall the early days of that artificial controversy of online vs print publishing, i.e. that print publishing supposedly is better? But if one focuses on audience versus reputation, it's logical to support online venues as such significantly expands readership. So back to Brussels--today I received my contributor's copy of the Belgian literary/arts journal On peut se permettre where one of my poems, "ROBOT COSPLAY," is presented in French translation. The translator Fanny Garin found my poem online and was moved to translate.
I never would have seen my poems in different countries than the U.S. or translated in other languages without online publishing. What I also love about this process is that my poems are speaking for themselves. As their author, I'm not doing any pitching blather about how great they are--the poems are read and judged solely based on their merit before they might pique a translator's (or any reader's) interest. Merveilleux!
I present them below because, although I'm not fluent in French, I think my poem looks lovely in that dress! Merci!
And I'm also presenting them here because they are in a print journal. Quelle belle ironie! 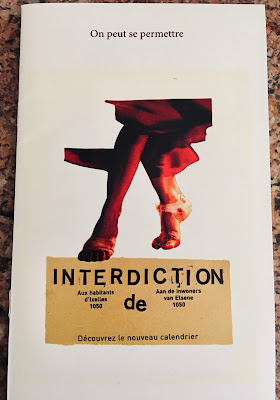 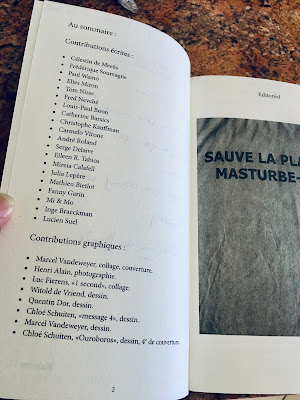 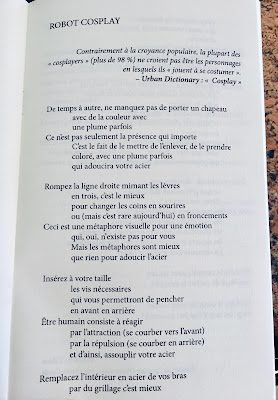 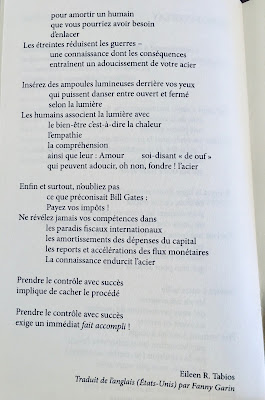 Posted by EILEEN at 3:16 PM No comments:

Email ThisBlogThis!Share to TwitterShare to FacebookShare to Pinterest
Labels: Translations, Where My Poems Are Appearing

Reading Yusef Kumonyakaa's Introduction to Ai's THE COLLECTED POEMS made me pause to consider: I rarely derive pleasure from reading such introductions to poetry. The introductions may be educational, well-considered, erudite, etc but, for me, they've not usually generated pleasure. So, perhaps for the first time, I finally found myself relishing--wallowing--in this form.

But it's not just because Kumonyakaa is writing prose well here--an achievement by itself (I just finished an hour before writing this post a conversation with another poet about how it's rare that poets can write prose well). I suspect his Introduction is generating so much pleasure because the poems, themselves, are meatily-pleasurable. It's quite respectful--though logical if one knows the charisma of Ai's poems--for Kumonyakaa to allow the poems to lead and hold their sway (many critics writing about poetry fail to achieve the balance of presenting their response versus the existence of the poems themselves).

Thus, it's a pleasure to say--I not only recommend Ai's poems in this book, but even the Introduction to it. If it's not the first time, it's the first time in a looooong time that I've ever said that about such an introduction. 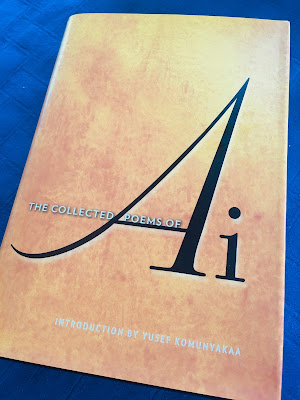 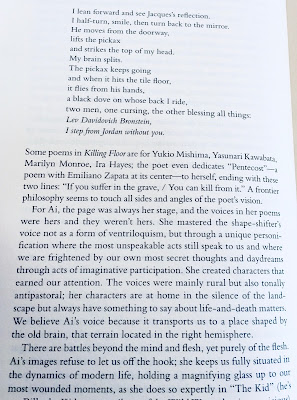 You are invited to

"The Dictator's Aftermath: A Conversation"
which will also launch Eileen R. Tabios' new book of short stories,
PAGPAG: The Dictator’s Aftermath in the Diaspora 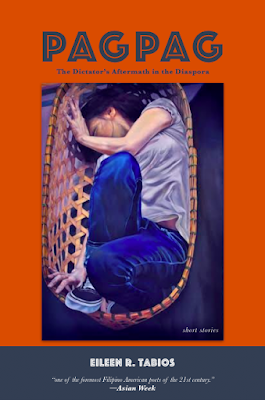 Link information for PAGPAG: The Dictator’s Aftermath in the Diaspora –
https://palomapress.net/2020/03/15/pagpag/

Eileen R. Tabios has released over 60 collections of poetry, fiction, essays, and experimental biographies from publishers in ten countries and cyberspace. Recent releases include a short story collection, PAGPAG: The Dictator’s Aftermath in the Diaspora and a poetry collection, The In(ter)vention of the Hay(na)ku: Selected Tercets 1996-2019. Forthcoming soon is her third bilingual edition (English/Thai), INCULPATORY EVIDENCE: Covid-19 Poems. Her award-winning body of work includes invention of the hay(na)ku, a 21st century diasporic poetic form, and the MDR Poetry Generator that can create poems totaling theoretical infinity, as well as a first poetry book, Beyond Life Sentences, which received the Philippines’ National Book Award for Poetry. Translated into 11 languages, she has edited, co-edited or conceptualized 15 anthologies of poetry, fiction and essays. More information is available at http://eileenrtabios.com

Joi Barrios-Leblanc has published three books of poetry, including the Filipina feminist classic Ang Pagiging Babae ay Pamumuhay sa Panahon ng Digma /To Be Woman is to Live at a Time of War (Babaylan Women’s Publishing Collective, 1990). She is the author of a collection of plays, Bailaya (University of the Philippines Press, 1997), and her dissertation, Mula sa Mga Pakpak ng Entablado: Poetika ng Dulaang Kababaihan (University of the Philippines Press, 2006), is a study of Filipina playwrights. She has won several national writing awards in the Philippines: the Weaver of History Award, given to one hundred Filipinas for their contributions to Philippine society by the National Centennial Commission, 1998; the TOWNS Award (Ten Outstanding Women in the Nation’s Service), 2004; and the Gawad Pambansang Alagad ni Balagtas (National Balagtas Lifetime Achievement Award) for Poetry in Filipino, 2016. Barrios currently teaches Filipino and Philippine Literature at the University of California, Berkeley.

Albert E. Alejo ("Paring Bert") is a Filipino Jesuit priest who worked with trade unions and informal labour groups in Manila before earning a doctorate degree in social anthropology at the School of Oriental and African Studies, University of London. He is founder of Ehem! Anti-corruption Initiative and author of Tao Po! Tuloy!: Isang Landas ng Pag-Unawa sa Loob ng Tao, Generating Energies In Mount Apo: Cultural Politics In A Contested Enviroment, Nabighani: Mga Saling Tula ng Kapwa Nilikha, and other works. He teaches at the Ateneo de Manila University, and his areas of specialization include Christian Social Ethics: Corruption and Violence and the Formation of Social Conscience, Intercultural and Interreligious Dialogue, and Methods of Research for Doctor of Ministry.

Nerissa S. Balce is an Associate professor of Asian American studies at SUNY Stony Brook. Her research focuses on race, gender, state violence and popular culture in the U.S. and the Philippines. She is co-curator of the online art project, Dark Lens / Lente ng Karimlan: The Filipino Camera in Duterte’s Republic, an online exhibition of Philippine photographs of the drug war featuring commissioned poems and captions by 40 scholars and artists from the Philippines and North America.  Dark Lens  is currently on view at SUNY Stony Brook's  Center for the Study of Inequalities, Social Justice and Policy website. Balce is the author of the book, Body Parts of Empire: Visual Abjection, Filipino Images and the American Archive , winner of the 2018 Best Book award in Cultural Studies from the Filipino Section of the Association for Asian American Studies. The book was also a finalist for the best book in the social sciences for the 2018 Philippine National Book Awards. She was born and raised in Manila, Philippines.

Renato Redentor ("Red") Constantino is the Executive Director of the Institute for Climate and Sustainable Cities and the author of The Poverty of Memory: Essays on History and Empire. He is anthologized in Letters to the Earth (HarperCollins, 2019) with Yoko Ono, Mary Oliver, Emma Thompson and Mark Rylance, Humanity (Paloma Press, 2018) with Eileen Tabios, Laura Mullen, and Murzban F. Shroff, Literary Encounters: A Comprehensive Worktext in 21st Century Literature from the Philippines (University of San Carlos Press, 2016), and the Japanese publication The World Can be Changed: An Anthology for Posterity (TUP/Seven Forest Bookstore, Tokyo: 2004), along with Ariel Dorfman, Jane Goodall, Chalmers Johnson, and Sami Ramadani. As head of ICSC, he published and contributed to the anthology, Agam: Filipino Narratives on Uncertainty and Climate Change (ICSC, 2014), which was awarded three national book awards. He writes for several publications, and his essays on history, memory, environment and development have been translated into several languages. Red also manages the Constantino Foundation which is dedicated to advancing the idea of a usable history, where lessons from the past become active elements of the present.

S. Lily Mendoza (she, her, hers) is a native of San Fernando, Pampanga in Central Luzon, Philippines, the traditional homeland of the Ayta peoples. She is a Professor of Culture and Communication at Oakland University, Rochester, Michigan and the current Director of the Center for Babaylan Studies (CfBS), a non-profit organization on Turtle Island (North America) offering educational programming aimed at facilitating decolonization and pagbabalik-loob (recovery of an indigenous way of being in the world) among Filipinos in the diaspora.  She is the author of Between the Homeland and the Diaspora: The Politics of Theorizing Filipino and Filipino American Identities and lead editor of Back from the Crocodile’s Belly: Philippine Babaylan Studies and the Struggle for Indigenous Memory and has also published widely in various cultural and native studies journals and anthologies on questions of identity and subjectivity, cultural politics in national, post- and trans- national contexts, discourses of indigenization, race, and ethnicity, and, more recently, civilization and climate change.

Email ThisBlogThis!Share to TwitterShare to FacebookShare to Pinterest
Labels: PAGPAG, Readings & Other Appearances

I'm grateful to editor/publisher Mark Young and Otoliths for creating a book out of my March diary in The Time of the Coronavirus. You can get the book TINY STICKERS: A COVID-19 AUTOBIOGRAPHY through HERE. 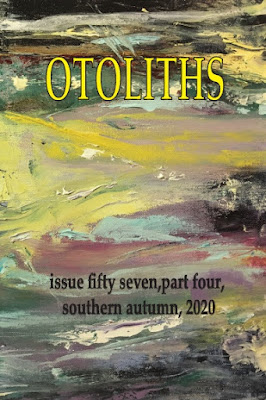 As Otoliths describes the book,

Though I didn't plan it, this ends up being one of two Covid19-related books I'll be releasing this year. The second will be, INCULPATORY EVIDENCE, my third bilingual edition which also features the first time I'll be translated into Thai. More details on that to come.

THE HAY(NA)KU AS GARGOYLE!

As world-traveler hay(na)ku visits schools, I'm delighted to share a poem by Brianna Hobson, a student at a CUNY LaGuardia course called "Poetry Workshop" and taught by professor-poet Thomas Fink. Thank you, Brianna!

I,
Ghoulish decoration.
Serpent on Cathedral

I,
Perfectly camouflaged,
Among dark flesh—

In,
Mourning garb,
Toe to head.

The
crows and
ravens caw over

what
about me
isn’t ‘black enough’

Basilica
Moor nobody—
Silhouette of stone—

A few more students also wrote in hay(na)ku. If their poems become available for sharing, I'll be delighted to feature more on this space. I feel blessed!

And if anyone wants to learn more about the hay(na)ku, go to its link ... and here's my latest hay(na)ku book: 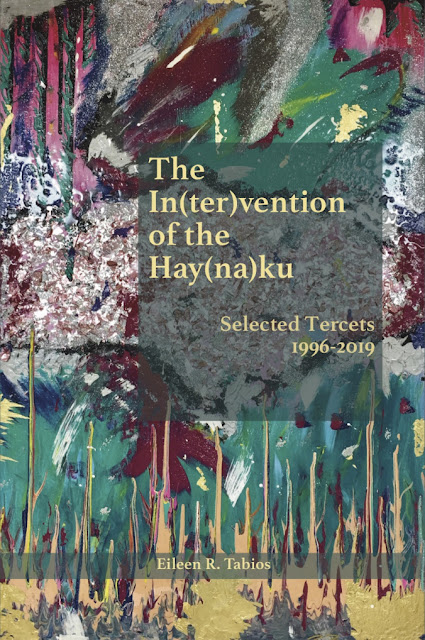