I'm a bit verklempt. I wouldn't have thought a year ago that 2018 would bring out three hay(na)ku books ... in time for the hay(na)ku's 15-year anniversary!  Thank you, Universe!  These aren't out yet but do enjoy their selfies! 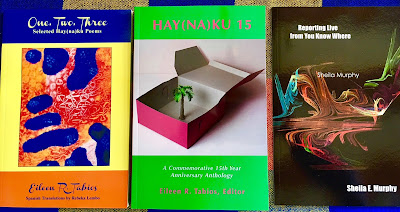 One, Two, Three: Selected Hay(na)ku Poems, a bilingual edition by Eileen R. Tabios with translations into Spanish by Rebeka Lembo