BIBLE STUDY: A BOOK FOR MOM

When my father died in 2006, I wrote about it and such stuff came to form the book I wrote for Dad:  THE LIGHT SANG AS IT LEFT YOUR EYES: Our Autobiography (Marsh Hawk Press).  It's still one of my favorite book designs (done by Claudia Carlson) for its front cover that features Dad at the prime of his life before he became bedridden by cancer (it probably shows me at the prime of mine too but that's a different story):

THE LIGHT SANG... wrote itself out of me swiftly as if that writing out would be a way to get rid of the grief that so overtook me at Dad's death.

As Mom, too, became bedridden by cancer before she died in 2011, I knew that I'd have to write a book for/on(?) her.  But this one would be more arduous and time-consuming a process (I've barely started though it's been over a year) because our relationship was much more complicated, deep and multi-layered than the one I shared with Dad.  My relationship with Dad was simple: he loved me and I loved him back though I was often inept at showing it.  With Mom, to describe that relationship would require verbal diarrhea that I don't want to inflict on whatever public reads me.  I've even thought about not writing on Mom--our relationship was deep but often fraught and, as one poet once counseled me when I was a newbie poet, not everything needs to be written.  But I always I knew I would write on Mom -- she was a writer, too, and I actually feel that if I never ended up writing on her (when she so appreciated my poetry at the end), it would be an insult to her.

After Mom died, I began a file of material that I thought might be useful when I finally began writing on her--it's a small file, still, though includes a copy of Roland Barthes' MOURNING DIARY (I would come to discover that when Susan Schultz write about her mother in “SHE’S WELCOME TO HER DISEASE” DEMENTIA BLOG [VOLUME TWO] (Singing Horse Press, San Diego, CA, 2013), Barthes' book also was part of her reading for that project).  But I was keeping a file without really yet attempting to do much with them.

Well, I missed Mom a lot this past Holiday season--and it was that missing that spurred me to breathe new energy into my book project FOR her (yes, I think the right term is "for" and not "on" or "about").  So I had the idea, multi-tasker that I am, to combine this effort with one of the items on my To-Do List: paying attention to the Bible again.  The Bible is one of the greatest tracts humanity has ever put together; I hadn't read from it since I was a teenager in young adult Bible study classes.  While it's fair to say I've often strayed from many of its dictums, I also know I never really gave that book full attention.  Indeed, the most attention I've given the Bible probably was slant--it was in the forefront of my attention from studying religion with the brilliant Elaine Pagels when I was a freshman at Barnard College, with much of the course revolving around Pagels' THE GNOSTIC GOSPELS -- from which one takes away the idea that the formation of the Bible was beset by political and cultural factors that makes the Bible imperfect.  The Bible may be "Holy" but it is imperfect (which I actually appreciate, by the way).

Anyway, Mom was a classic, old-school church lady who did good works and studied -- even taught -- Bible Study at her churches (mostly the United Methodist Church in Wilmington, CA).  When, as a widow, she moved into my home she came to attend the local UMC church where she kept up with their Bible Study.  So, while attending Christmas services last month, I thought of also doing Bible Study, partly because it'd give me an excuse to pay attention to this particular book, but also to retrace some of Mom's steps.  The third reason, of course, is that it'd give me an always welcome context nowadays where I wouldn't feel so old because I'd be the Baby in the group.  To wit, here's a photo from this Monday's session of some of Mom's former cohorts in Bible Study (we will meet every Monday morning from hereon - grin).  From left to right, these are Ardys, Bible Study director Carolyn, Mattie and Jean.  Carolyn and Jean are apparently in their 70s, while Ardys and Mattie are in their 90s: 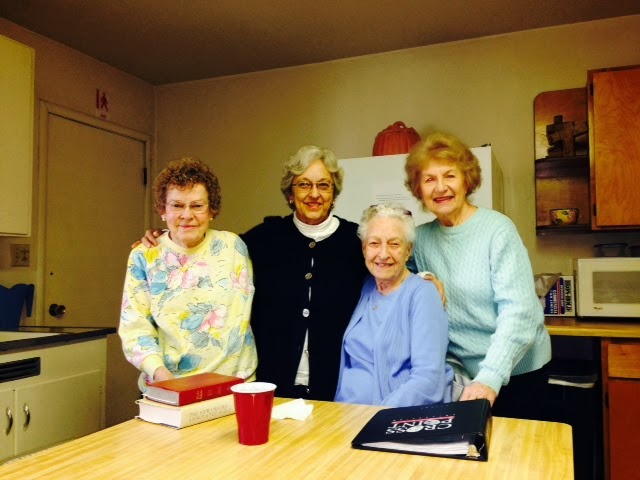 They don't actually leap into the Bible right away (indeed, their reading has an extremely slo...o...ow pace).  They spend the first 20 minutes probably just chit-chatting if not gossiping.  But I appreciate it all -- the experience also is creating a reason for me to interact with their generation (something I don't really have now in my life now that my parents have passed), and the sweetness from this type of encounter is unique, special, uplifting ... and, I can see now, something I will treasure for being a new part of my life.  Simply -- these grannies are a hooooot!

Here's a closeup of Ardys with her custom-made lunch (they bring lunch and eat with each other after the hour-long Bible Study).  Ardys is one of the gentlest creatures I've met but her nickname is "Troublemaker"! I look forward to discovering why that's the case!  She's also an inspiration as she still drives -- she will enjoy her 90th birthday this Friday.  I am sending her a card from one of Mom's voluminous stationery stacks that I "inherited": 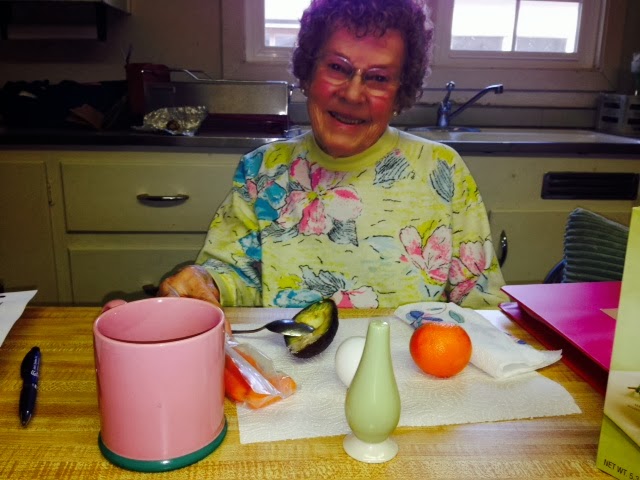 It's all good.  I have a good feeling about this set of encounters -- for the book and for easing my grief over Mom's premature (in my mind, premature even though she was nearly 82) passing.  That's why, my working title -- but it feels like a keeper -- for the future poetry book I'll write FOR Mom is likely to be entitled:

We'll be studying the gospel of John soon, by the way.  You know, John -- who hearkened Genesis by beginning his contribution with

In the beginning was the Word ...


Yes, Mom was a writer, too.  She released her book DAWAC and Other Memoir-Narratives when she was 81 years old, a couple of months before she died.  Here's her book's lovely front cover (as designed by Michelle Bautista): 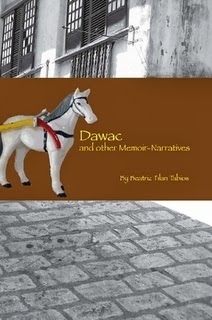