Well.  I wasn't looking to do it but I did it -- my first "academic" publication re poetry. I want to thank Tom Fink for recruiting me, prodding me, then editing me in order to be part of an absolutely fabulous and critical (pun intended) anthology: READING THE DIFFICULTIES: DIALOGUES WITH CONTEMPORARY AMERICAN INNOVATIVE POETRY (University of Alabama Press, 2014).  The book includes an essay much-revamped from its public debut as an engagement in Galatea Resurrects -- an essay looking at John Bloomberg-Rissman's book-length poem, 2ND NOTICE OF MODIFICATIONS TO TEXT OF PROPOSED REGULATIONS, REGULATION AND POLICY MANAGEMENT BRANCH, CALIFORNIA DEPARTMENT OF CORRECTIONS AND REHABILITATION.  I know--it's a mouthy title but, hey, it's a mouthy poem! 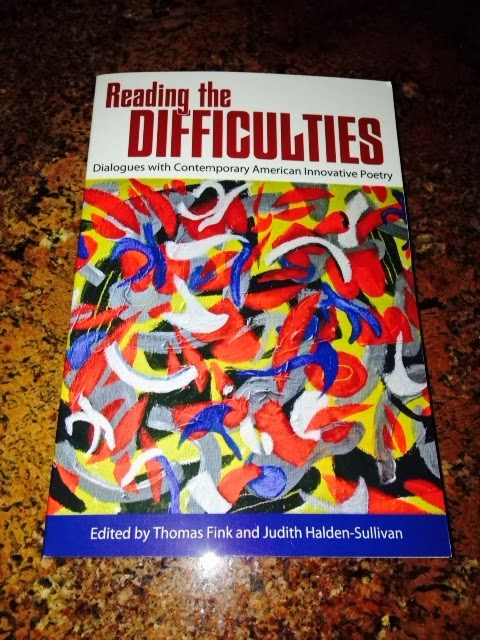 Here's some of the publisher's info on the book:

The bold essays that make up Reading the Difficulties offer case studies in and strategies for reading innovative poetry.

Definitions of what constitutes innovative poetry are innumerable and are offered from every quarter. Some critics and poets argue that innovative poetry concerns free association (John Ashbery), others that experimental poetry is a “re-staging” of language (Bruce Andrews) or a syntactic and cognitive break with the past (Ron Silliman and Lyn Hejinian). The tenets of new poetry abound.

But what of the new reading that such poetry demands? Essays in Reading the Difficulties ask what kinds of stances allow readers to interact with verse that deliberately removes many of the comfortable cues to comprehension—poetry that is frequently nonnarrative, nonrepresentational, and indeterminate in subject, theme, or message.


Regarding my own contribution, the difficulty partly arises from how the poet created his poem.  To write create 2nd NOTICE..., John Bloomberg-Rissman took a document (about the death penalty) he received through his email, printed it out, and slapped a cover around it.  That's it.  Is that a "poem"?  I argue it is -- though it may be difficult (difficult, get it?) to persuade others.  How does one critique such a project?  Well, read my essay -- and other fabulous essays in THE DIFFICULTIES. But here's a teaser -- an excerpt from my essay on how to read this particular difficulty:


EXCERPT:
...[because] the source text was an editing document, it contained various editing formats, like the underline indicating added text and the strike-through indicating deleted text. Based on just the first page, the editing changes offer much of what's poetic—or can be poetic—about the document, I mean, poem. For example, at one point, "person" was deleted and replaced with "inmate".   A possible reading or interpretation could be how "inmate" allows for a distancing effect from the "person" soon to be killed.

In another example, when the word "warden" was edited to reflect the capitalization of the first letter into "Warden," a possible reading is how that capitalization gives additional weight to the role of said Warden.

One doesn't have to rely on those parts of the text that are being edited. Just this sentence, copied a hundred percent and presented forthright, bludgeons with no other needed ornamentation:

Inmates sentenced to death shall have the opportunity to choose to have the punishment imposed by lethal gas or lethal injection.

If one goes through the rest of the poem beyond the first page, there are many effects generated without the need of additional textual aids from the poem’s author.  And it’s that allowance of the thing speaking for itself that can maximize the effect on the reader.  For instance, to take certain statements in 2nd NOTICE… at face value is to realize how its legalese or bureaucratese-speak serves to elide the horror of the matter at hand.  Some sentences, for example, serve to eliminate the reference to “Condemned Row” within the document.  There is also the section

(t) Lethal Injection Room means the room where the inmate is executed.

Why “Lethal Injection Room”?  Why not use “Execution Room”?  The mind can go into many different directions as a result of considering the implications of what may seem like a simple creation of a legal definition.  Execution Room would be a more powerful reference to what the poet calls “judicial murder.” Why the euphemism?  Who is doing the spinning—the massaging of language?  How is the language being massaged?  Who is being protected, and not?

I was also struck by one of the exhibits, a “SERVICE OF EXECUTION WARRANT-WARDEN’S INITIAL INTERVIEW”.  This document is what the inmate is supposed to sign to acknowledge receiving the Warrant of Execution issued by a Country Superior Court, as well as to acknowledge understanding of his entitlement to a choice of either lethal gas or lethal injection for purpose of execution.

I found this attachment horrifying!  Why is it necessary to force the inmate to address the means of execution?  Why could not the more humane option simply be applied?  I am baffled by the need to force the inmate to address this issue—which can only serve to heighten suffering.  Given the context—he’s already being executed and it’s often not the inmate’s choice—it seems an unnecessary potential source of mental torture.  As with this matter, 2nd NOTICE… serves to accomplish the poet’s desire to draw attention to the death penalty proceedings without the author having to insert his own words.

What does it signify when poet seeks to make a poem but avoid "having to insert his own words"?  Many things, and John Bloomberg-Rissman undoubtedly has his own reasons--some of which are manifested on his own blog, Zeitgeist Spam.  For me, this practice is an admirably radical application of one of my ars poetica beliefs:

Poetry is all around us; the poet's job is not just to make up poems but to be lucid enough to see and recognize ... the poetry all around us.