So yesterday I went to the 2nd session of the Bible Study I began as part of my "research" for writing a book for Mom.  The group's approach is to just chat and share updates of their lives (including gossip, but of course) before getting down to the actual Bible study.  But it occurs to me that this is actually the way a book -- especially The Bible -- should be studied.  The reading experience -- especially for poems -- is hugely dependent on the reader so why not involve the reader's life as part of "reading"?

Which is all to say, this is why I'm posting Mattie's pic below -- as she celebrates her lovely purple -- "and FREE!" -- sweater.  Free as she went to a cousin's house and got it there.  Mattie is the one I walked in on who was struggling with the copy machine.  Miracle of miracles -- I fixed it (a judicious "turn off, turn" on solution).  That is, since I'm the youngest in the group (Mattie is in her 80s or 90s), I'm supposed to know technical stuff (hear that, Michelle?). 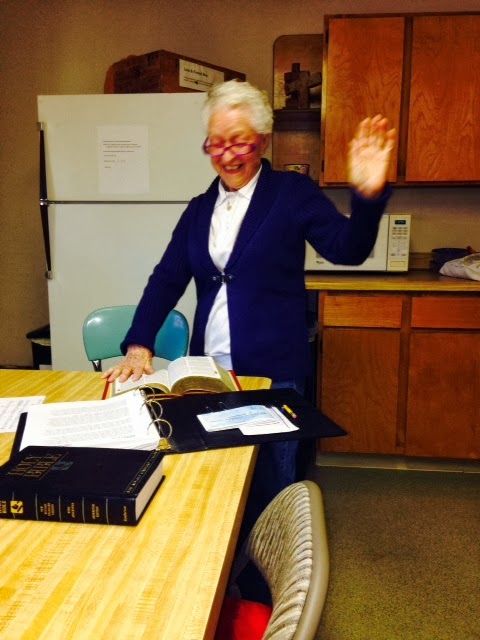 Yesterday's chatter session was all about football.  And check this out -- one of the players in this weekend's championship football games owes my Bible study pastor some money!  That's right!  He was apparently in Napa Valley a few years back and he and his wife did a marriage renewal ceremony.  At my pastor's backyard even!  And when come time to pay the bill -- which my pastor (who didn't know who he was) had *discounted* in price for him -- they tried to pay with a credit card because they don't carry cash.  (How'd you like to be so rich you never carry cash?).  So my pastor said just send me a check when you get home.  Well, years later ….

I don't automatically loathe rich people.  But I loathe people who feel "entitled" (regardless of their economic or social status).  C'mon Football.  Pay the minister whose wages are usually, to put it bluntly, LOW.

By the way, I'm not rooting for Denver.  I am rooting for Peyton Manning.  That statement there, folks, also says something about how I've navigated myself through the "poetry world." No wonder I'm obscure….

Anyway, Bible study.  We're reading Luke and it was interesting to study the story of how Judas betrayed Jesus during the Last Supper.  In the book I wrote for my father, THE LIGHT SANG AS IT LEFT YOUR EYES, I had incorporated the discovery unfolding around me as I was in the middle of writing the book -- the discovery of the long-lost Gospel of Judas Iscariot  which showed, among other things, how his "betrayal" was not actually a betrayal but a form of obedience to Jesus' desire that he be betrayed in order to set forth the events that would begging from such a betrayal.

Thing is, my minister dismissed my comment about Judas' gospel.  Which just goes to show the difficulty, isn't it, of allowing new information in one's life (of study), including info that would cause a bedrock change in one's life-long beliefs.  Such is the opposite, I suspect, of the poet's role.  I believe the poet needs to be supple when it comes to receiving new information.  Actually, I'm surprised to observe how many aren't.

But perhaps I shouldn't be so surprised.  Poets?  Well, they're just people too.  Human ...

The Bible -- yes, I think it's one of those texts that is aptly read as if the whole of it is a poem.  The problem is that such reading can cause damage as well as benefits.  Such, is the human experience.  It is complicated to see the Word as the Word, when the See-er is not a seer.

Email ThisBlogThis!Share to TwitterShare to FacebookShare to Pinterest
Labels: BIBLE STUDY, The Light Sang As It Left Your Eyes