THE INVISIBLE MADE MANIFEST

I cite those names above because the project is not about me.  And, yet, to my surprise I find that I have five entries in it -- five projects that involve the Invisible.  But no wonder I thought of this project -- I was attuned to it in the first place!

My first project inputted into the Library Blog is LET'S REALLY TALK ABOUT YOU. WHAT DO YOU REALLY THINK ABOUT ME?, which I'd concocted when I was first looking to populate the blog with examples of what could fit the Library of the Invisible.  Took two seconds to conceptualize.

Then, since I began working on the project, I realized I'd already created three other projects that fits the theme of BIBLIOTHECA INVISIBILIS!  There's A BLURB PROJECT: The Secret Lives of Blank Lines (from my 2006 book THE SECRET LIVES OF PUNCTUATIONS, VOL. I).

Then, there's the invisible-because-it-has-yet-to-be-created book that's supposed to emanate from my BLURBED BOOK PROJECT!  You should click on the link as this was/is one of the most hilarious projects I'd ever conceived!  I've nearly emptied the wine cellar so far trying to write this book.  So far, unsuccessful!  But I've got decades to go ...!

Then, there's THE SECRET, aka, THE SECRET TO HAPPINESS.  Too bad that book's text is invisible as I'm sure we'd all love to know ... the secret to happiness!

Then, last but not least, there's the "Footnote Poems" from my book I TAKE THEE, ENGLISH, FOR MY BELOVED.

And, speaking of Footnote Poems, here's what they looked like published on the book -- basically a near-empty blank page except for brief footnotes edging the bottom of each page: 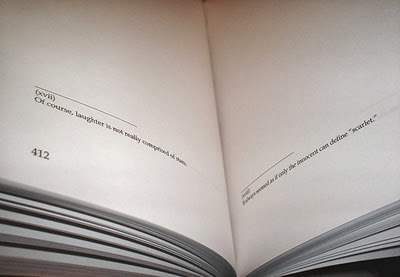 By leaving the page mostly blank, the foonotes are designed to encourage the reader to inscribe on them.  The reader(s) would inscribe text (poems, stories, whatever) which presumably contain material that would be aptly footnoted by the printed footnote-poem on the bottom of the page.  The late poet/writer Rochelle Ratner had used my Footnote Poems in a writing workshop she led at a senior citizens' center somewhere in New York.

One Footnote Poem series, "Footnotes to 'The Virgin's Knot' by Holly Payne" is comprised of footnotes including the ten below:

[1] He realized her sadness when the weaver formed holes shaped as falling tears.
[2] The retired sheepdog’s lullabye: a virgin weaving a new row of knots.
[3] She cannot remember a time when her fingers were free of wooden splinters.
[4] In exchange for electricity, they accepted a colonizer’s alphabet.
[5] A professional commits space to memory.
[6] Ah! To understand hands like Fazil Husmu Daglarca!
[7] In her eyes burn the fires of numerous tribes, as well as the redness derived from limbs dropped to the ground by steel.
[8] She defined ambition as the helpless compulsion to write songs for women who will never wear headscarves.
[9] The thin mattress smelled of lemon and wild rose.
[10] The bride wore a red veil, which alerted him to the tears she painted with kohl against her inner thighs.


I share the above because I'd like to share Aileen Ibardaloza's reactions to the footnotes.  The number beside each title below corresponds to the numbered footnotes above.  Thanks Aileen!

“To
my dear
and unhappy wife,”

he
wrote (for
he married her

and
died the
same day). Dulce

Taimis
walked the
aisle with the

ashes
of her
love’s letters sewn

into
the hem
of her gown.

The father placed his bid and waited. If it is accepted, then he wins his daughter’s dowry— a magical rug woven by a virgin, “the knots so strong they could hold the dead”, or a virgin bride. The father believed in his heart that this rug, unlike any other, could answer prayers (such as male offspring for his daughter, prosperity for his future son-in-law). He continued to feed the tespih through his fingers for to be a worthy supplicant is to exalt, and to exalt is to possess humility in repetition.

The shadow of the minaret stretches as the father prepares to lead the call to prayer.

Hattusa fell in the 12th century BC.

The “Sea Peoples” of Danube flourished in Asia Minor.

Gordius, a Phrygian king, tied a knot with no free ends.

Untie the knot and rule all of Asia, according to prophecy.

Alexander cut the knot with a sword in 334 BC.

Behold, a twist: Cynane unties the unknotted loop, which is to say, the misfortune of topologies is invariance, the absence of notion.

Delicate and familiar is
the secret language

of hands. There is, for
instance, the piña, (un)spoken

by the weavers
of Aklan. Nu shu,

by the wives of ancient
China. Chope,

by the grandmothers
of Punjab. Nakis,

by the women of Anatolia.
Soft, wispy, red and endless,

is the sum of their symbols.
The quivered touch, stitch

by stitch, meant, simply,
this: I live, unimagined.

to
make my
child a match.

Untie
his knots,
spread his robe,

wrap
his arm.
Seat her, greet

her,
find a
jester. Unveil her.

“Do you love me?” he asked.
And how could she have said no,

here, where the olive trees grow.
He spoke of love like sea and sky

colliding, like bodies turning to water,
the dust foregone. There is only water,

and what floats on it, love by love,
between Rome and Carthage.

And him on it. And her. Of course,
it happened a long time ago. Who remembers

the mass of green? what evokes
in the wind? But he creates her over

and over, as she closes her eyes,
over and over, to the horizons.

My old same hides
her face behind a  fan

as she gazes at her
plate filled with Dragon  shrimp

and Phoenix feet, at
her cup filled with

joyful wine, at her feet
in lotus shoes. I reach

for a plum, ever
slighter than a peach,

and regard the
tao of laotongs.

And when she saw him, she took her veil and covered herself, for such an act is not only proper, but also necessary in marking her bounds.

He then brought her into his tent, and she became his wife.

And he loved her.

The fecundity of mattresses derives from what lies on top. In a word, weight.

“You can get married in Gibraltar near Spain” then “Come to John and Yoko's honeymoon: a bed-in” (room 702 Amsterdam Hotel). Wear pyjamas (or a bag), talk in bed for a week, try “to get some peace”.

What do you see here? Long black hair redolent with lemon balm. In a word, need.

How lovely, splendidly wrapped
in the red

and golden yellow bagh
of the trousseau.

In Gurmukhi script is
a name. One

bride is covered, the
other one concealed.

First, she ate her
sweetmeats, then she

The Invisible Made Manifest!  What FUN!  Again, you are invited to BIBLIOTHECA INVISIBILIS!

Email ThisBlogThis!Share to TwitterShare to FacebookShare to Pinterest
Labels: Bibliotheca Invisibilis, Blurbed Book Project, I Take Thee English For My Beloved, The Secret Lives of Punctuations, Vol. I