A STORM OF POETS ... FUNDRAISE!

Super Typhoon Haiyan—known as Yolanda in the Philippines—was the largest storm ever recorded on land, affecting over 14 million people who became homeless, widowed, orphaned or saw their beloveds die or themselves died in the onslaught of water and wind. Rebuilding efforts are estimated to require about three years with the Philippine government estimating that such efforts will cost about US$8.59 billion.

In response to Yolanda’s devastation, Filipino poets in the homeland and the diaspora rallied to create a fundraising anthology entitled VERSES TYPHOON YOLANDA: A Storm of Filipino Poets. Edited by poet and editor Eileen R. Tabios, the anthology of 133 poems is released by Meritage Press (San Francisco & St. Helena), and can be ordered online through the press’ Lulu account (see above link). All of the book’s profits will be donated to relief organizations and others helping the survivors of Yolanda.

Book sales and, thus, fundraising proceeds, need not occur simply through online purchases. Meritage Press will work with fundraising organizations or individuals wishing to raise funds for Yolanda’s survivors. Specifically, Meritage Press is willing to send books at cost to fundraisers who then can sell the books at their individual retail price of $20 each. The fundraisers then are free to donate the profits to organizations of their choice who are involved in aiding Yolanda’s survivors. For more information, contact Eileen R. Tabios at MeritagePress@aol.com 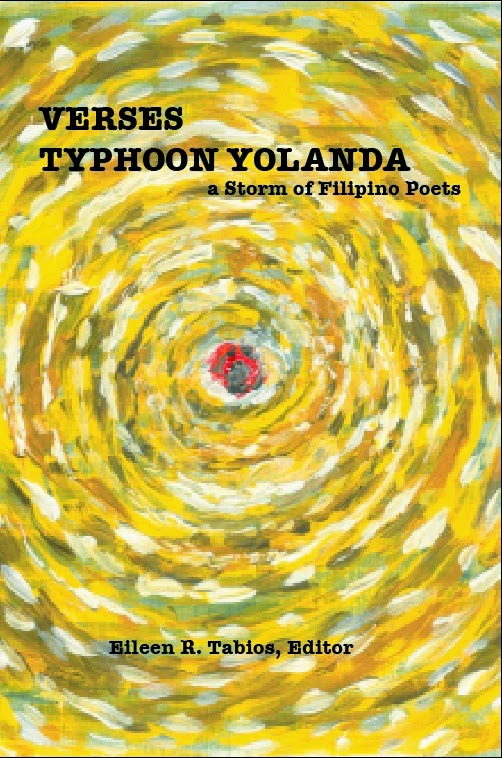 While the anthology was created for fundraising, the result also showcases the wealth of talent in Filipino poetry. Although not created for this purpose, this book is a useful showcase of contemporary Filipino poetry. Most poems are written in English, but a few also present examples of some of the Philippines’ languages: Filipino, Cebuano or Bisaya, Waray, and  Hiligaynon (with excerpts from their English translations).

Additionally, while each individual poem may be powerful, the poems together create a sum-effect greater than its parts. What results is both novelistic in scope and urgent in communicating the news. For the news continue beyond the actual incident and aftermath of Typhoon Yolanda. The news continue about how our actions degrade the environment and each other, making likely the return of Yolanda’s brethren…unless we amend our actions. The sum of these poem-stories also reflect a different reality from what’s mostly been presented in the media, attesting once again to the importance of Filipinos speaking up on their own behalf.

A Foreword is provided by poet-scholar Leny Mendoza Strobel, whose presence is appropriate due to her ground-breaking studies into the decolonized Filipino self and how pakikipag-kapwa/building-a-beloved-community is an indigenous part of Filipino identity. For the eagerness with which Filipino poets embraced this project manifests the indigenous Filipino trait of Kapwa.

Here are some “Advance Words” from poet-scholar-critic-editor Susan M. Schultz:

This is a book about a destructive typhoon named Yolanda, or Haiyan, which caused massive damage to the Philippines in November, 2013. This is a sprawling book of poems about family, loss, art, economy, greed, love, grief, theft, militarism, colonialism, typhoon tourism, deforestation, stray dogs, survivors, rubble, donations, propaganda, looting, journalists, dead children, helicopters, rain, disembowelment, black bags, conquerors, catastrophe, “the republic of the drowned” (Luisa A. Igloria). This is a book in English, Filipino, Cebuano, Waray, Hiligaynon, Bisaya. This is a book by poets who teach, poets who study, a poet who drives a tricycle for a living, poets who work for NGOs, poets who are school children. This is a book by 133 Filipino poets who live in the Philippines, the United States, Britain, the Netherlands, South Africa, elsewhere.  What is diaspora but the aftermath of storm? All profits from this book will be donated to relief organizations. “Aid is art,” writes Simeon Dumdum, Jr. Now art will aid survivors of the storm.

Meritage Press and the poets in VERSES TYPHOON YOLANDA appreciate your support.