HOW ONE BOOK COVER GETS MADE

I try to be quite loose when it comes to Poetry (part of knowing the futility of maintaining control when practicing this art).  What I do look for are people I trust.  Once I identify those people, I then go with the flow in terms of how our engagement(s) work.  So, I trust Jukka-Pekka Kervinen, the publisher of the new press gradient books (which swiftly got onto my LinkedIn Poetry Recommendations list with William Allegrezza's stellar STILL. WALK. offering; I can tell I'm going to be in great company with gradient book authors).

Jukka is an innovator in harnessing e-technology for publishing poetry (starting with his xPress(ed) many years ago) and has published many poets and artists whose work expand the scope of (their) art.  It's an honor to be associated with any of his endeavors.  Anyway, after giving him the poems that make up my next book, 147 MILLION ORPHANS (MMXI-MML), I just let Jukka do his thing as publisher.  Here is the process for how we ended up with the book cover.  First, I gave him two photos I took during one of my international adoption-related trips to Colombia, the first being the dining area of a hotel catering to adoptive families and the second being a room of cribs for infant/toddler orphans.  I didn't insist he use either photo but just offered them in case either might be useful for cover purposes (click on images to enlarge): 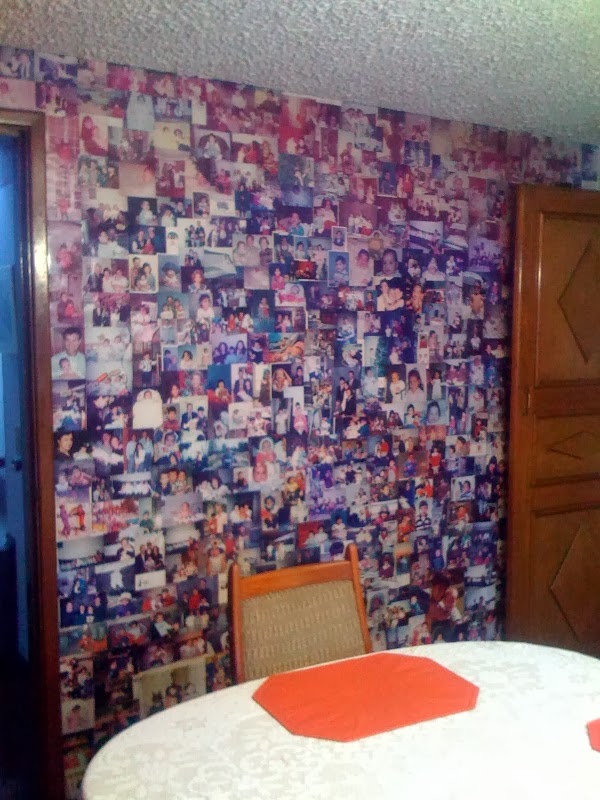 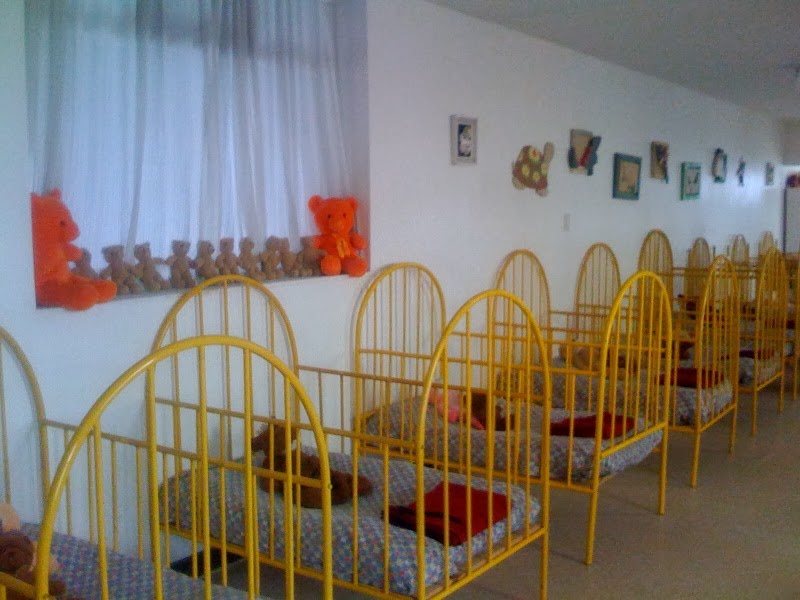 This was his Jukka's first draft of the front and back cover that he shared with me (that is, it's the first draft I saw as he may or may not have had prior working drafts): 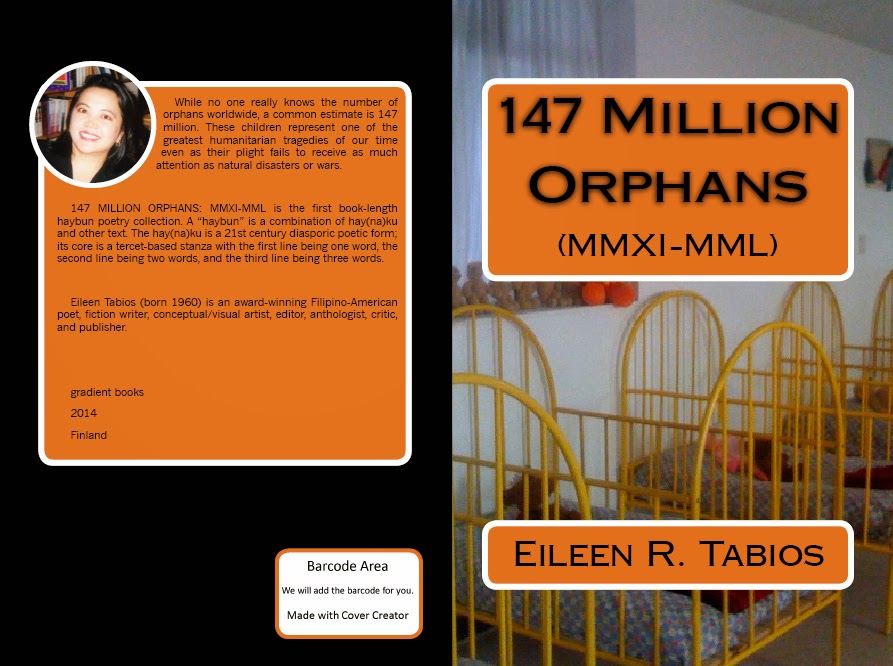 I laughed when I first saw it. Not because I scoffed at his treatment which I liked.  But Jukka had taken my author photograph from the internet (it's not like he and I have met in person since he lives in Finland) and the photo he took was one from perhaps 12-13 years ago (I used it in an older book) when all of my hair was still black (we can all refuse to age in the internet, if we so wish!): 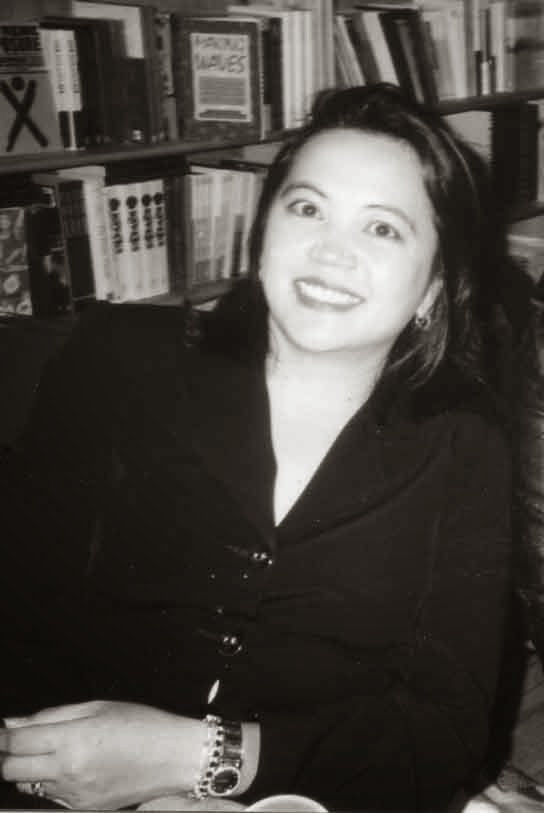 So I suggested two changes: (1) that he adjust the box with the title to show the heads of the orange teddy bears in the photograph and (2) to replace the old author photo with a caricature-sketch of "Mom" by my son, which I show in its glory here (am I always pursing my lips at him?): 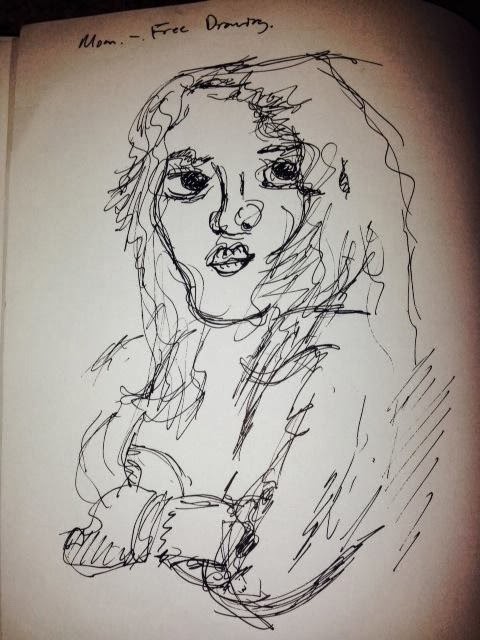 So Jukka then sent over what I thought would be the final cover after I saw it: 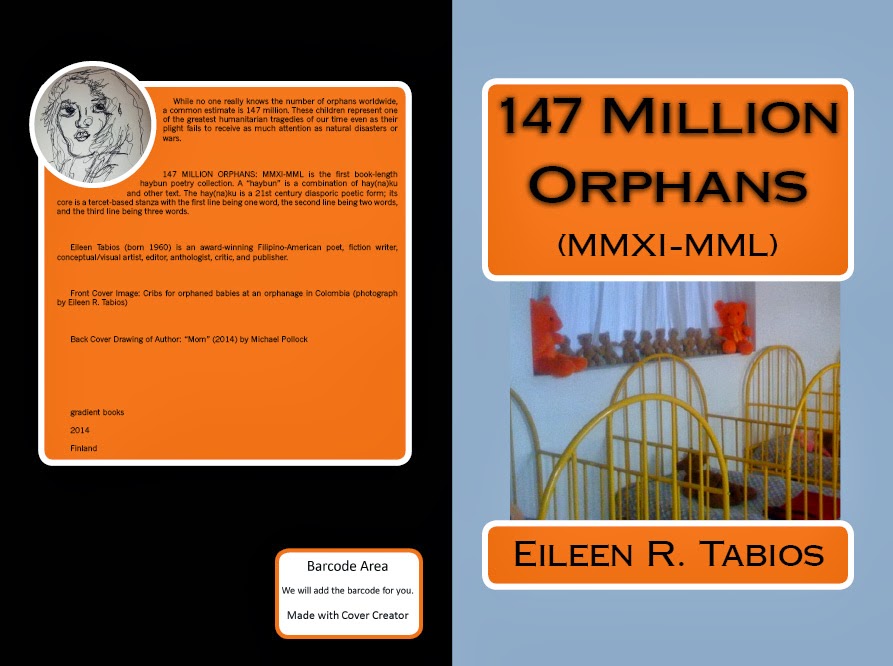 While I was glad to see the orange teddy bears be more visible, I actually preferred the crib room to be shown as wide as in the first draft.  The problem was that the photo was of poor quality (something I took with an old iPhone during my Colombia trip) and so Jukka had to narrow the focus in order to clarify the photo's details.  Nonetheless, I was still happy with the result.

gradient books has an account utilizing Amazon/CreateSpace for its books and so Jukka sent the formatted book over to them.  A few days later, to our surprise, Amazon/CreateSpace said they couldn't handle the interior product due to my poems' formattings which include many "strike-throughs."  So we decided to put up the book through gradient books' account at Lulu.  This required a change of the front cover because the initial covers were based on Amazon/CreateSpace options.  Here then is the final front cover of my book: 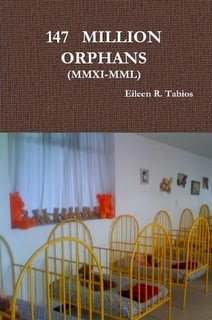 It's all good.  I hope you enjoyed this inside look at one part of one book-making process. And thank you very much, Jukka!  You're the ideal poet's publisher!