I am blessed to release my 20th (I think) poetry collection through gradient books: an experimental poetry press helmed by the visionary Jukka-Pekka Kervinen: 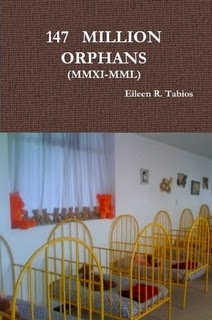 Here's some info about the book through its "PRE" (or Preface):

While no one really knows the number of orphans worldwide, a common estimate is 147 million.  These children represent one of the greatest humanitarian tragedies of our time even as their plight fails to receive as much attention as natural disasters or wars.

147 MILLION ORPHANS: MMXI-MML is the first book-length haybun poetry collection.  A “haybun” is a combination of hay(na)ku and other text. The hay(na)ku (http://haynakupoetry.blogspot.com)  is a 21st century diasporic poetic form; its core is a tercet-based stanza with the first line being one word, the second line being two words, and the third line being three words.

For these haybun, the opening hay(na)ku tercet generally served as impetus to the subsequent prose. Each word forming the hay(na)ku tercets is taken from a school project by Eileen R. Tabios’ adopted son, Michael.  After arriving in the United States, Michael had been encouraged to learn English in 8th grade partly by learning 25 new words a week.

Also, ahem, this is the first time (and perhaps last) that I'll ever punch out a discourse on boxing, in that writing category of "Write about what you don't know."  I do a dove's coo at Mike Tyson with the thousand-yard stare that can fell an opponent even before the first jab.  Here's a photo of the boxing gloves I used to do "research" (what I do for this ridiculous Muse!): 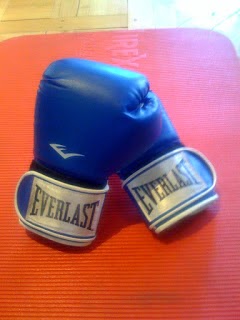 I hope the book knocks you out (okay, couldn't resist that jab...).

Lastly, the book soon will be available for $15 on Amazon.  Note that the above book title is linked to the book's Lulu account where it's not just priced for $10 but carries a 25% price discount.  $7.50 is about as inexpensive as any of my books go, nowadays!