[Poets are invited to participate in this series of snapshots of poets’ reading habits. For information, go HERE.]

What are you reading now? As well, what is in your To-Read-Soon stack? Please share comments about your readings: 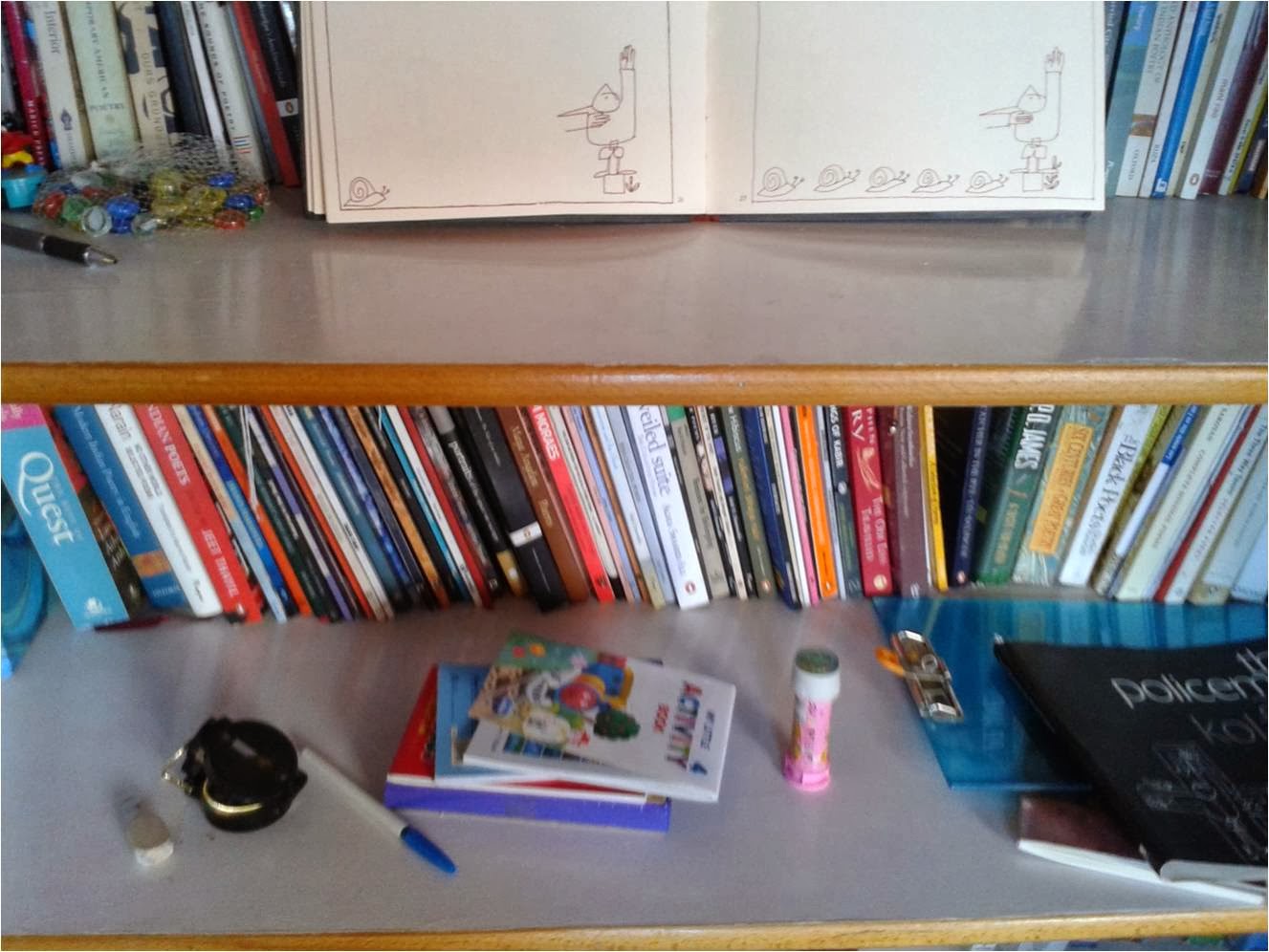 This is the first book of wordless poetry from modern India. Viparita Alankaram, the ornamentation of extremes, is at work. 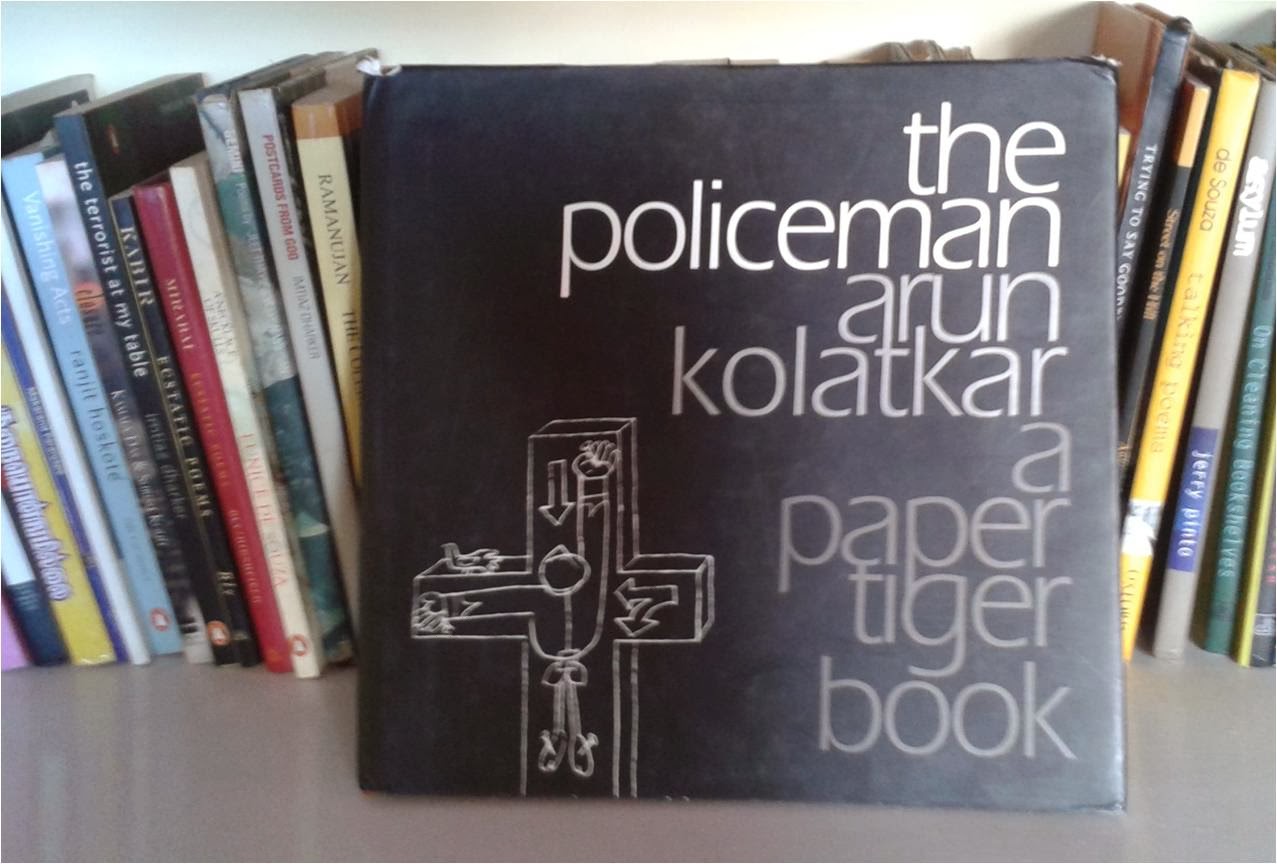 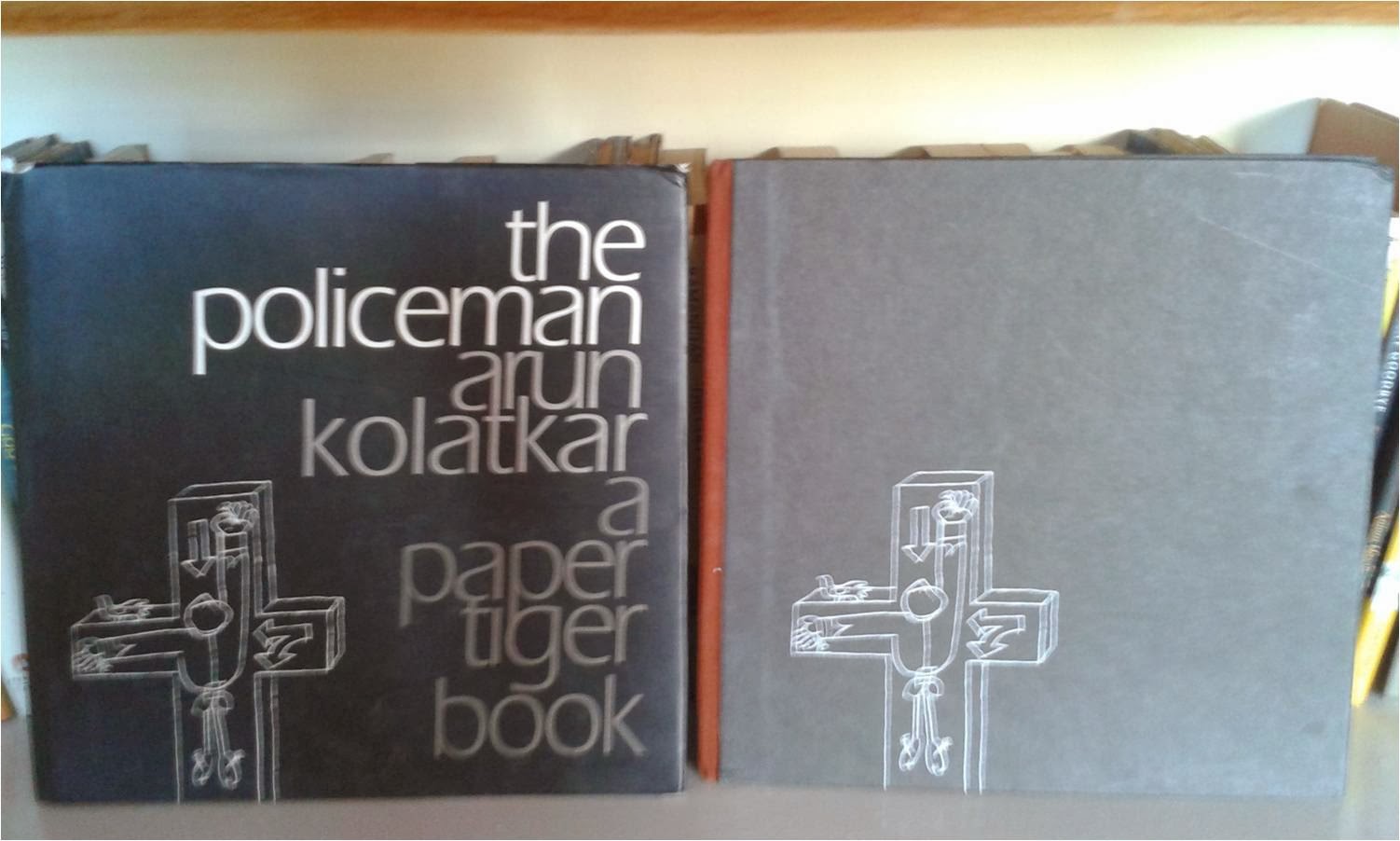 The book comes with a jacket including a drawing and words.  The hard cover inside the jacket contains nothing but the single drawing from the front cover.  I’ll present excerpts from section 3 of this book:

The drawing on pg.26 shows a single snail approaching in the direction of the policeman. 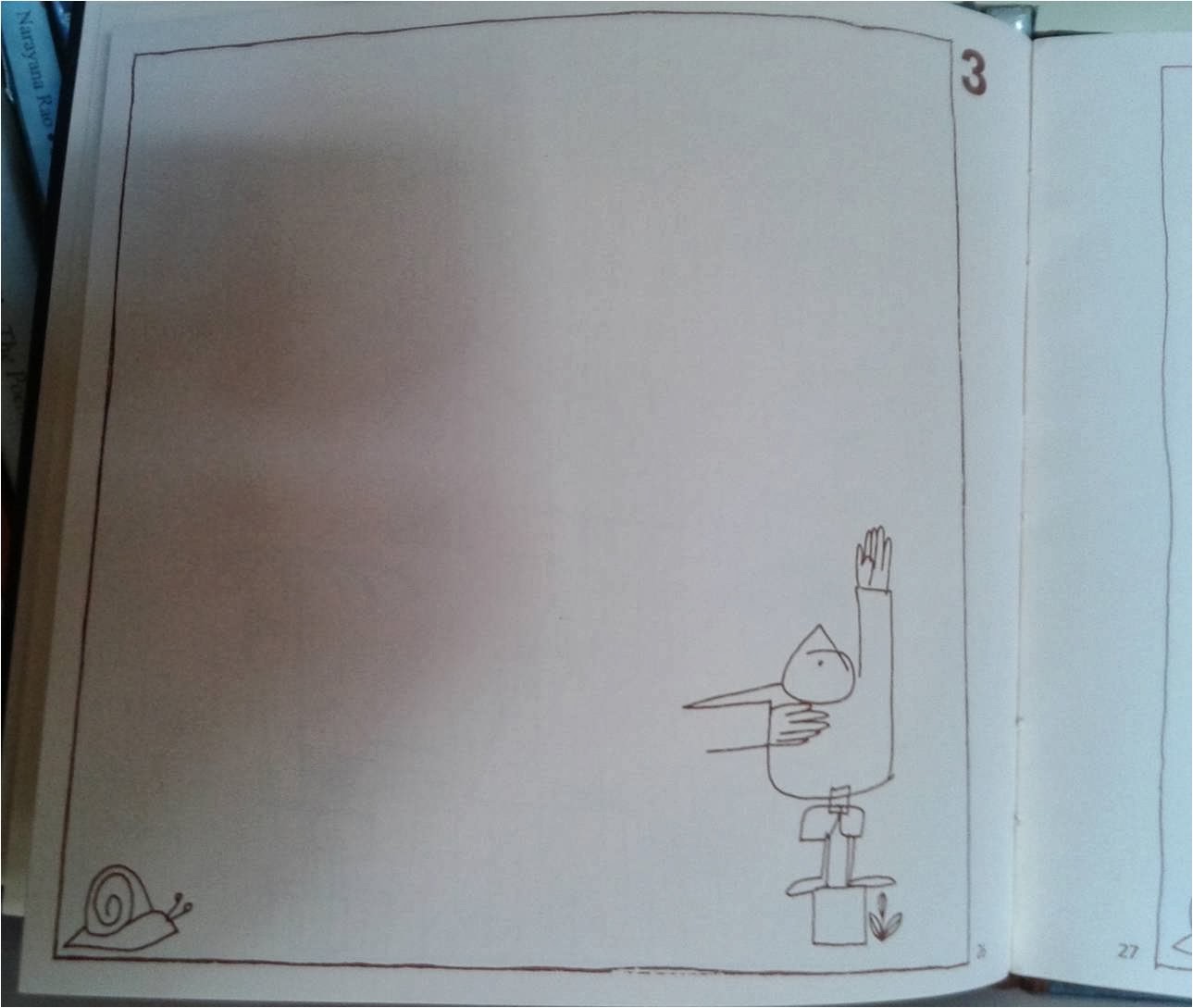 The drawing on pg.27 shows passage of time in animation; snails multiply. 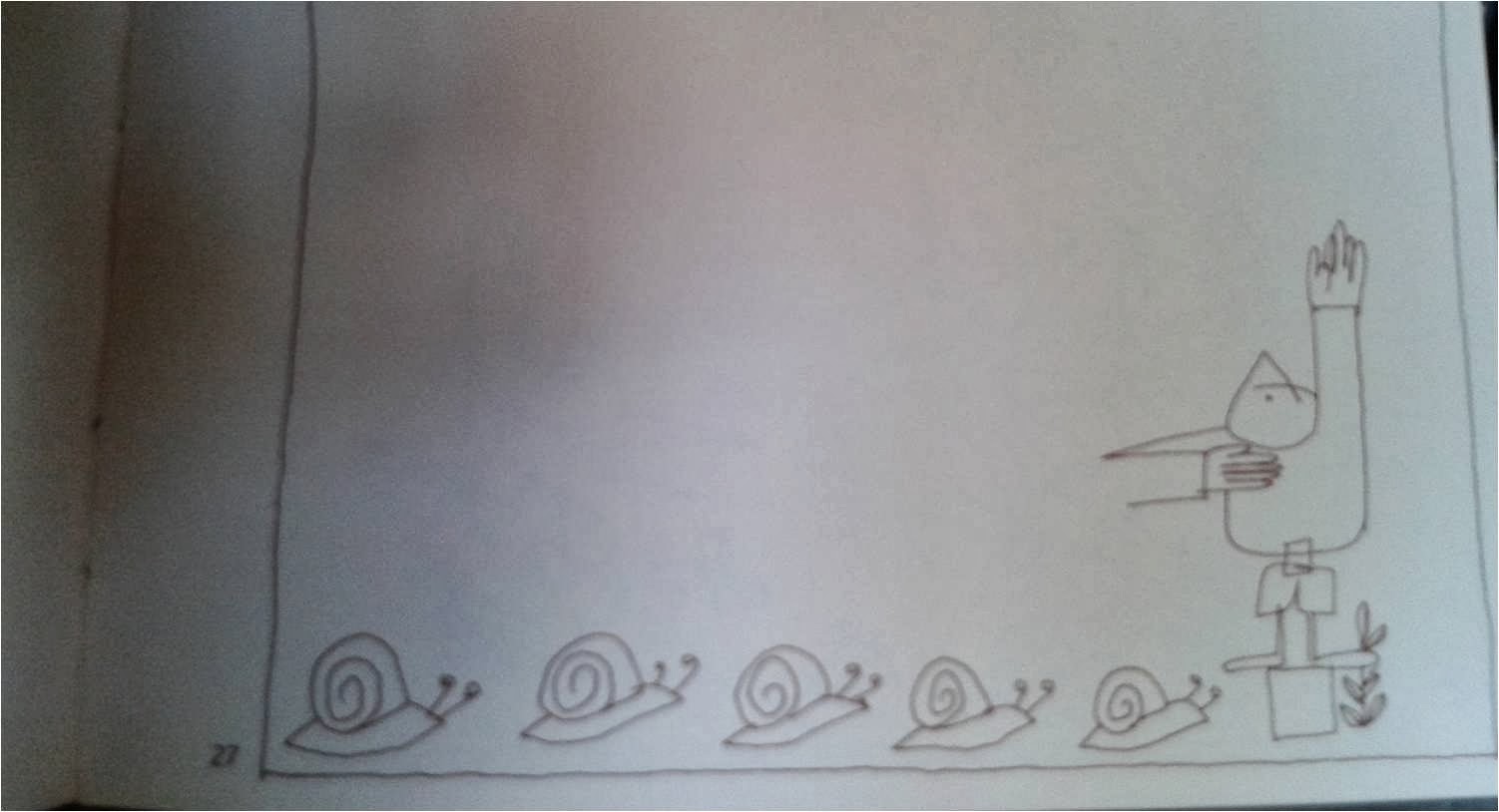 transforming the word in this representation of its plurality.


Arun Kolatkar STANDS with his STANDPOINT on God.

“Ramachandran’ (translation mine) from Nakulan’s ‘Selected Poems’ published in Tamil original in 2012 as Therndeduttha kavidhaigal by Kalachuvadu publications, Nagecoil, Tamil Nadu (India) which I purchased on Infibeam for Rs.66/- after discount.

Nakulan also wrote in English in his real name, T.K.Doraisamy.

What I liked about this poem is the eeriness of communication. In the conversation above, the talk that seems to happen between two parties is apparently NOT an intended communication. A dual of this is cross-talk: a third party interference, unintentional in the main conversation, which is noise, may at times add value to the conversation. In Tamil Vaishnavite tradition, Yadava Prakasha returned to Ramanuja based on his mother’s interpretation of a conversation happening between two other people in the Kanchi Varadan temple. This kind of information exchange is given a specific name in Sanskrit grammar which I am unable to recall now, but it is not eavesdropping in English. 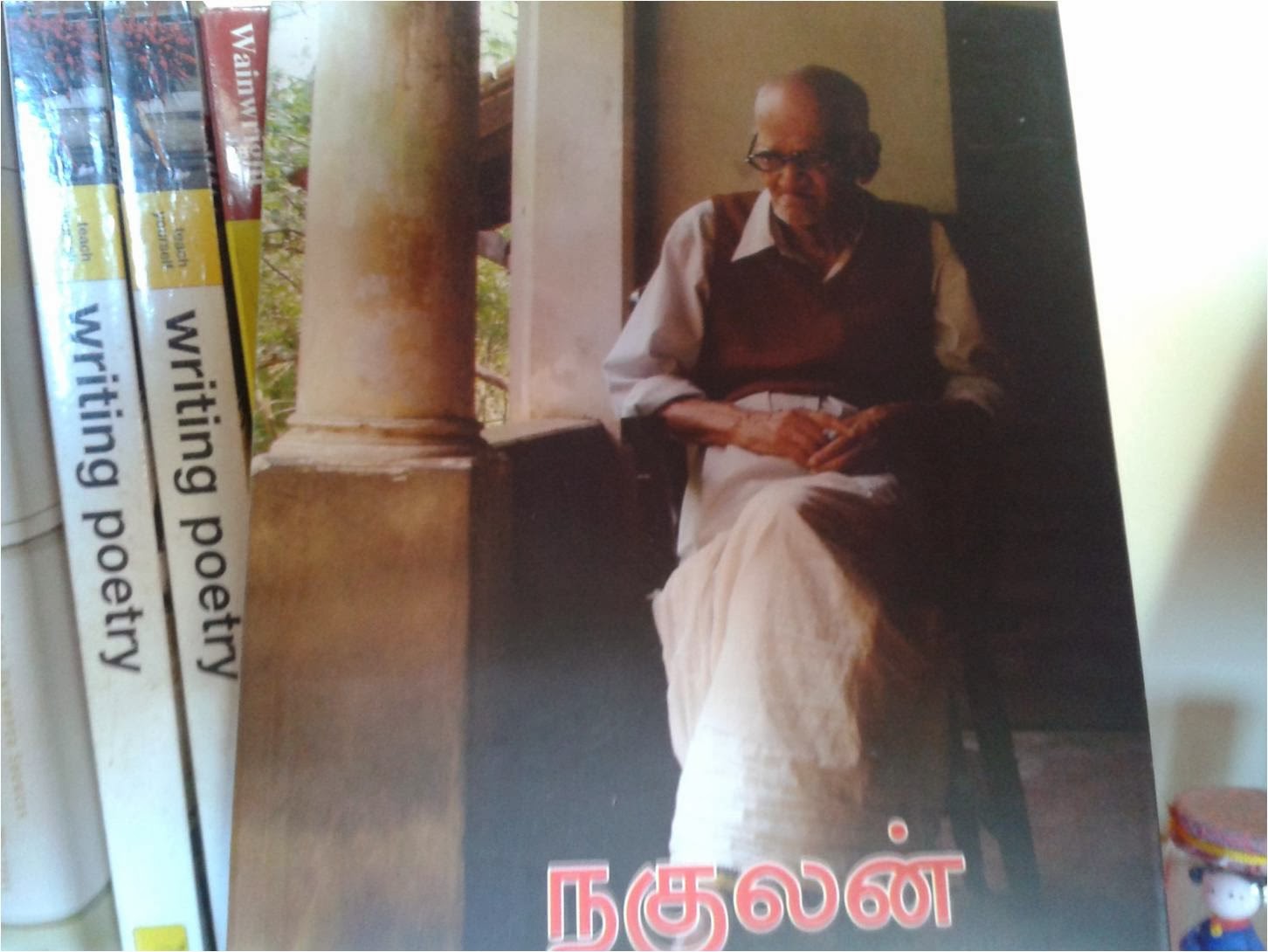 Translations Without Originals by Julio Marzan, 1986, I.Reed Books, USA purchased from Select Book House for a price I can’t remember.

is a signal I could pick at the first glance from the cover as it is. The book opens with the poem, “The Pure Preposition”

“Minding us our labor is a product of small parts:
With, by, for, in, on, against”

Poetry of the everyday, of ordinary people and experiences, irony, humor:

Yes, play with the root canal.
Save the tooth!
I need it for smiling.
(from Emergency)

The book is replete with poems like “The Desert Walker”, “The Ringmaster”, “The Tightrope Walker”, “The Carousel Boy”, “Friday Evening”, “Sunday Morning in Old San Juan” and so on.

Sameness and Variety in Poetry (pg.31)

Ordinary poems (and novels) always write about love and similar things. Is it one point against ordinary (non-spiritual) poetry? If there is sameness of expression in spiritual poems, it is due either to the poet’s binding himself by the tradition of a fixed set of symbols (e.g. Vaishnava poets, Vedic poets) or to his having only a limited field of expression or imagination or to his deliberately limiting himself to certain experiences or customs that are dear to him. To readers who feel these it does not appear monotonous. Those who listen to Mirabai’s songs don’t get tired of them nor do I get tired of reading the Upanishads. The Greeks did not tire of reading Anacreon’s poems though he always wrote of wine and beautiful boys (an example of sameness in unspiritual poetry). The Vedic and Vaishnava poets remain immoral in spite of their sameness which is in another way like that of the poetry of the troubadours in mediaeval Europe, deliberately chosen. Variety, vaicitra, is all very well, but it is the power of the poetry that really matters. After all every poet writes always in the same style, repeats the same vision of things in “different garbs”

Obviously, it is not desirable to repeat oneself …………….. The only recipe I know is to widen oneself (or one’s receptivity) always. Or else wait in the eternal quietude for the new “white word” to “break” it- if it does not come, telephone

I.K Sharma is a familiar name in the Indian small press. I came to know of his work through The Journal of Indian Writing in English edited and published by G.S.Balarama Gupta from Gulbarga, Karnataka; “Bombay” appeared in one of its issues in the early 2000’s and I liked it. ‘

“In today’s literary circles, when poetasters and single-text writers indulge in all kinds of gyrations for self-publicity, Sharma’s five and a half decades of literary ‘Sadhana’ or journey towards self-realization, is eloquent about his caliber and his achievement.”

The cover contains the picture of Hawa Mahal and declares “a perfect poem in pink”.

The blurb and the allusion to perfection in the front cover are misleading. (‘poet among poetasters = one-eyed man among the blind?) Of interest is GS Balarama Gupta’s anthology on neglected voices in Indian prose which he edited: “Bright Candles in Dark Lanterns”. Five generations down the line, I am more interested in knowing about the literary climate that marginalized these voices.  I would have loved it if our small press poets shone at least like electric bulbs in hurricane if not as stars. Sharma has an instantaneous sense of humor (Ezekiel on my Scooter) and irony that attract me to his work.

One of the advantages of living in nanoyuga is that I can order books online. This is how I got to own two of Gopi Krishnan Kottoor’s books which I wouldn’t have found anywhere in bookshops. Poetry in our age is easily accessible.