WRIT ON THE ARMS!

Sometimes teen hi-jinks just amuse me so!  Michael just showed me his latest drawing, which he did a la tattoo on his arm: 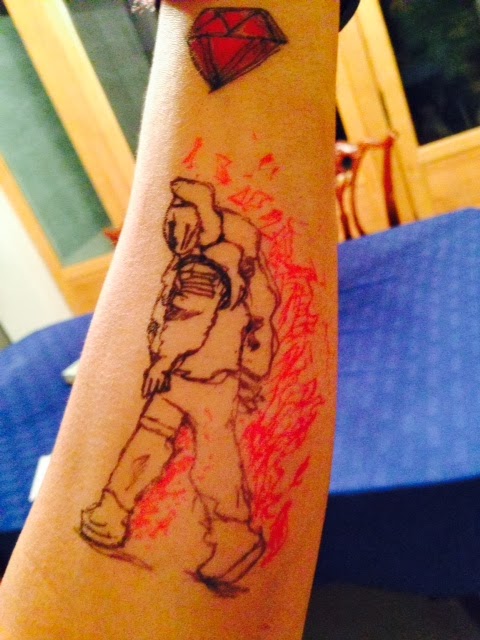 Thing is, it reminds me of a real tattoo John Bloomberg-Rissman put on his arm, an image I so loved I used it for the front cover of one of my books, FOOTNOTES TO ALGEBRA!  Here's John's arm: 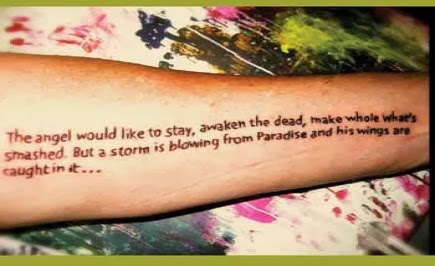 
A Klee painting named Angelus Novus shows an angel looking as though he is about to move away from something he is fixedly contemplating. His eyes are staring, his mouth is open, his wings are spread. This is how one pictures the angel of history. His face is turned toward the past. Where we perceive a chain of events, he sees one single catastrophe which keeps piling wreckage upon wreckage and hurls it in front of his feet. The angel would like to stay, awaken the dead, and make whole what has been smashed. But a storm is blowing from Paradise; it has got caught in his wings with such violence that the angel can no longer close them. The storm irresistibly propels him into the future to which his back is turned, while the pile of debris before him grows skyward. This storm is what we call progress.[1]


Michael's thesis for his arm drawing is equally cerebral.  He says it's an astronaut walking amidst fire, an image he drew because, uh, he liked it.  Works for moi!