WHEN THE POETS' "WRISTS ARE MAGIC"

I was delighted to provide blurbs for two upcoming publications -- great poetry out there! These are unedited blurbs:

CORPOREAL by Jean Vengua
To “[r]emember how / to touch our bodies” is to embark on the inevitable: “there was / a plot; / [you] did not / escape.” As Jean Vengua notes in Corporeal, the journey contains peril: “Aswang repairs her wound / with bone and thread.” But, as ever, knowledge is its own good: “but / grow to love the scars.” These poems are scars from bodily interactions—with ourselves, with others, with environs, and even with language. What for? Perhaps “a new angel, thrashing / on the wings”? That Vengua articulates “angel” implies hope. From a body intimate with suffering, such hope presents potential for ecstasy—in these poems, the poet’s “wrists are magic” and the receptive reader can be led to grace if not bliss: “some kisses are / sweeter than wine.”

Woeman by T. De Los Reyes
By correcting normative spelling to be the more accurate “Woeman,” T. de los Reyes speaks Truth. The He in one poem reminds ,"You can’t spell meaning without the word man." Truthfully, one can’t spell “meaning" without the word “mean” and too often the adjective is not for significance so much as it is for anguish. These poems reveal pain as the condition precedent to too much, including holiness, beauty and awakening. Synchronistically, the poems' internal music makes, say, “desire” rhyme with “bonsai," a tree whose growth requires being controlled. It is no wonder that when you “Think Vesuvius,” you have these poems which reveal why “It takes a lot to love the world." 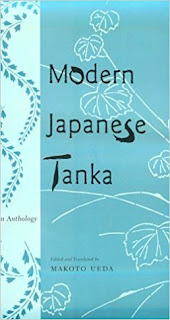 REPORTING LIVE FROM YOU KNOW WHERE, poems by Sheila E. Murphy (fabulous. Winner of The Hay(na)ku Poetry Book Prize)

PHENOMENOLOGY OF THE FERAL by Julia Rose Lewis (outstanding and impressive. LPR #275) 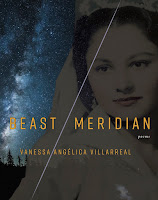 BEAST MERIDIEN by Vanessa Angelica Villarreal (OUTSTANDING & SUCH LUSH BEAUTY. A most intelligent mourning. And a direct contradiction to that racist binary of "technical and intellectual"ly accomplished versus group-identified. LPR #276)

LESSONS ON EXPULSION, poems by Erika L. Sanchez (the poet was onnnnn!)

NOTES ON THE SIGNS OF POETRY: ADDENDUM AND PRINTS by Sacha Archer (wonderful!) 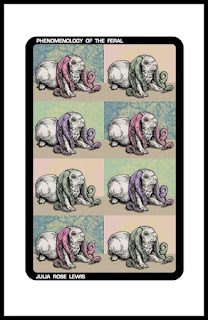 CRAWLSPACE, poems by Nikki Wallschlaeger (excellent, with the choice of the sonnet form a brilliant decision)

FOR WANT OF WATER, poems by Sasha Pimentel (it’s only her 2nd collection yet I’m tempted to call it a “breakthrough” when comparing it to her first. Part of its marvelous effect is the poet reaching far beyond the personal self)

LOVE POEMS FROM HELL by Zvi A. Sesling (funny. Lines like “I will send hot lava for you” or “At last you left / and gone you left / your teeth / which I will scatter / in the wind”)

*  WHITE DECIMAL, poems by Jean Daive, Trans. from the French by Norma Cole

THE BOOK OF WHAT REMAINS, poems by Benjamin Alire Saenz

* ALL OF THE REAL TEARS, poems by erica lewis

*  FROM THE FILES OF THE IMMANENT FOUNDATION, poems by Norman Finkelstein

OBSCENITY FOR THE ADVANCEMENT OF POETRY, poems by kathryn l. pringle

THE YEAR WE TURNED DRAGON, poems by Metta Sama

A WIFE IS A HOPE CHEST, poems by Christine Brandel

YOU ENVELOP ME, poems by Laynie Browne

OF ANNUNCIATIONS, poems by Ewa Chrusciel

SUB-SISTERS: SELECTED POEMS by Uljana Wolf, Trans. from the German by Sophie Seita

IN MAD LOVE AND WAR, poems by Joy Harjo

PRIMATES FROM AN ARCHIPELAGO, poems by Irene Suico Soriano

BRIDGE OF THE WORLD, poetry by Roberto Harrison

IF GOD WERE GENTLE, poems by D.R. James

A WOMAN WITHOUT A COUNTRY, poems by Eagan Boland

THREADS OF EXECUTION, poems by Orchid Tierney (in manuscript)

BRASILIA, poems by Monica Manolachi and Neil Leadbeater (in manuscript)

THESE DAYS OF CANDY, poems by Manuel Paul Lopez

WE ARE NOT ALONE: STORIES OF MENTAL HEALTH AWARENESS curated by Ann W. Shannon and Skye Noir

WAY OUT THERE: LYRICAL ESSAYS by Michael Daley

THE DIARY OF A BOOKSELLER, memoir by Shaun Bythell

THE PRIVATE PAPERS OF A BANKRUPT BOOKSELLER, faux memoir by Will Y. Darling