In February, "POSSIBILITY," a poem inspired by one of Merle Rosen's artworks was read during a reading celebrating the artist. Having received the Rosen Family's and Caza Sikes Gallery's permissions to post the inspiring artwork, I'm pleased to share the art and the poem it inspired. My thanks to Dos Madres Press and Grace Curtis for asking me to participate. 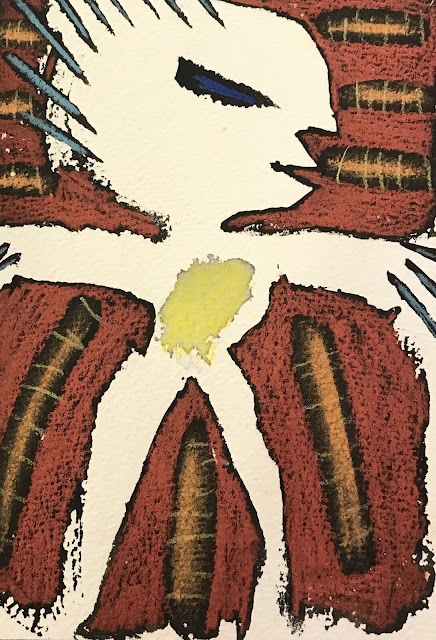 Yes
I am
possibility. I am

to-
wards what
I know not

but anticipate with
sun warm
upon

my
heart and
yours. Together we

as
I begin
to open eyes.

Oh!
Such colors
on the blanket

you laid out
for me.
You

affirm
my hope
to mature into

color.
I am
mostly blank canvas

now. But we
know I
will

burgundy,
will turquoise,
will glow gold

after
opening eyes
towards a universe

How lovely the
ocean becoming
my

eyes
because I
see water. We

all
want to
be seen, thus

become.
Welcome my
possibility, and I

will
grow into
your cherished rainbow.

Email ThisBlogThis!Share to TwitterShare to FacebookShare to Pinterest
Labels: Ekphrasis, Hay(na)ku, Visual Art, Where My Poems Are Appearing