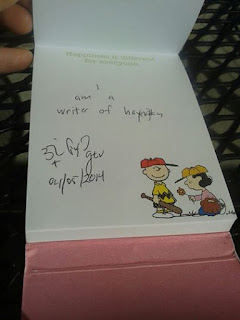 
First, I'd like to remind you of the Feb. 28, 2018 deadline for THE HAY(NA)KU 15 ANTHOLOGY to celebrate the hay(na)ku’s 15th anniversary!  The anthology is shaping up beautifully: there’ll be a section of all-Spanish hay(na)ku that translates most of the poems in The First Hay(na)ku Anthology (which is now out of print); and, to date, six languages, 10 countries, and 13 U.S. states are represented which showcase the hay(na)ku's reach. But there’s room for more. So if you haven’t yet submitted, Submission information is at https://eileenrtabios.com/haynaku/haynaku-15-call-for-submissions/

Inspired (or instigated) by the hay(na)ku, a Zambales-based poet Danny Gallardo has created the “Tan(g)ka.” The Japanese form tanka has five lines translated by many of its English-language practitioners into the syllable-per-line count of 5,7, 5, 7, 7.  Gallardo’s “tan(g)ka” has five lines based on the word count per line of 1, 2, 3, 4, 5. Variations, as with hay(na)ku, can be created, like the reverse tan(g)ka with the 5, 4, 3, 2, 1 word count.

Gallardo has expressed interest in seeing me do a tan(g)ka. But he may not know that I am slow to shorter forms because I’m a maximalist. While I “invented” the hay(na)ku, for example, it took me two years before I “got” that form … and I used to be amused/bemused at all the poets having a grand ol’ time doing the hay(na)ku before I got into it.  I’ve long thought I’m not the best poet of hay(na)ku—which, by the way, is more than fine with me as I believe the poem transcends the poet: I can’t think of a more fitting result than with me to present a poetic form that others then take forward.

So, back to the tan(g)ka—because the hay(na)ku remains three lines, issues of compression prevent it (I feel) from being flabby (well, perhaps except when one goes into the chained hay(na)ku sequence. But that’s another story.)  For the tan(g)ka, its five lines (for me) present a challenge for befitting its form. I think it'll take me a while to determine a relationship to its form; right now, I'm having a problem differentiating it much from free verse.

(Just as “poetics” matter to the manifested “poem”—to the extent one separates the two, the form’s conceptualization also matters. It may be interesting to revisit the History of the Hay(na)ku … anyway….)

So, wanting to create a tan(g)ka that isn’t de facto just free verse, I turned to my MURDER DEATH RESURRECTION (MDR) project which contains the constraint of a database of 1,167 lines (it is a book where reading it means inherently writing new poems). One of the great things about constraint-based writing is how said constraints move the writer from the limits of conscious imagination. From five of MDR's lines, I applied sous rature to create first a VizPo. From the non-stricken (pun intended) lines then surfaces the tan(g)ka.  I present my first tan(g)ka—dedicated to Danny Gallardo for conceiving the form. I appreciate any poet that attempts to expand the poetic landscape, not simply repeat inherited forms. 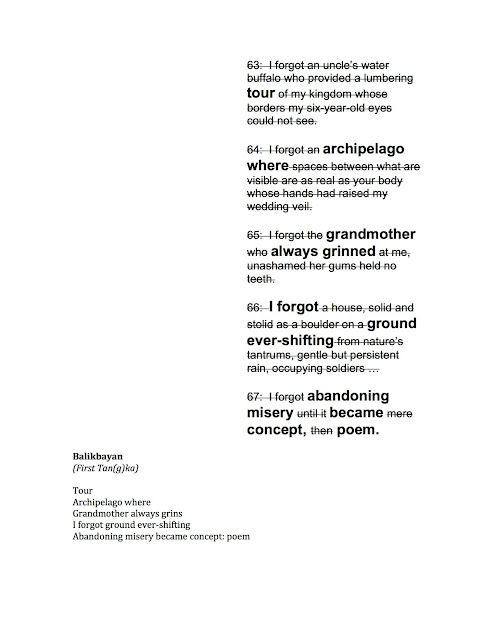