GREAT TO MEET YOU, KUNIO TSUKAMOTO! 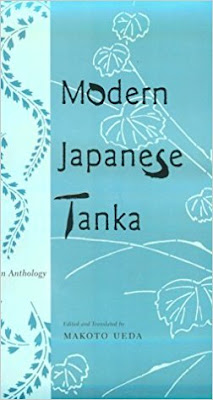 Makoto Ueda's (ed.) MODERN JAPANESE TANKA is a fabulous book. It introduces me to 20 of Japan's most renowned tanka poets in the 19th and 20th centuries--I was surprised (and not surprised) that my favorite surfaced so easily and *clearly*: Kunio Tsukamoto. I didn't know anything about him (or any of the other poets) and was not surprised to learn his background -- that he didn't associate with any particular tanka teacher or circle so that his first book was mostly ignored in tanka circles. But one author didn't ignore him: Yukio Mishima. Good for him and him: when you actually focus on the work, the work speaks more than social context.

I appreciate all the poets but another one who stood out is Fumiko Nakajo -- for me, her poems evokes Evelyn Lau's.
There you have it: my unbiased judgment :)
OF COURSE, here's an example of Tsukamoto's tanka -- it's timely, isn't it:

late summer day
in a country on the brink
of collapse

a nail buried in asphalt
shows its sparkling head