NOVEL: MAY IT MOVE BEYOND META 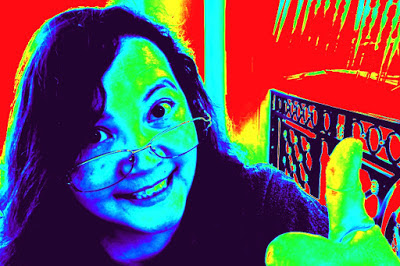 Thanks to editor Mark Young for having my 2016 year-long diary about writing a novel, complete with "Midnight Selfies" such as the one above (I wrote at night), appear in the new issue of OTOLITHS!  You can go to it HERE, but I'll reprint my Introduction:

Before I became a full-time writer, I worked as a banker. During my last year as a banker, I would return home from the office every evening and work on my “Great American Novel.” Indeed, I opted to resign from banking when I put “The End” at the bottom of that manuscript. Unfortunately, a few months into being a full-time writer, I came to realize that that manuscript, to put it bluntly, sucked. It was, by the way, a murder mystery set in a bank—Reader, let’s pause and feel the banality together.

Pagkatapos, for the next 20 years, I attempted and failed several times to write a long-form novel. Still, in December 2015, I decided that I would make one last attempt. I determined to do so by writing on the novel everyday during the year 2016. I ordered myself the constraint: the writing could be one sentence or 10,000 words but I had to write everyday. I am delighted to announce that, for the first time as a writer, I did succeed in writing a long form novel that, unlike my first effort, actually works! It bears the working title, The 1,146th Fairy Tale.

As this was a prolonged attempt at novel-writing, I also decided on the 76th day of hewing to my daily writing schedule that I would make my process public by occasionally noting updates on Facebook. My idea was that going public would fortify me not to give up as doing so would be a public humiliation—I believe that strategy worked several times as the year unfolded, especially on the days that I felt the writing wasn’t working well.

The following presents my Facebook notes of my novel-writing process, usually illustrated with a selfie. Selfies on their own don’t interest me, but my first occurred after a long, exhausting process after midnight—I usually wrote at night. Looking at my drawn face, I became interested in exploring the Midnight Selfie or Midnight’s Selfie. Lastly, as one can observe, humor became important in helping me maintain the necessary discipline to finish the novel. Please join me in my journey to the very last post on December 31, 2016.

It is too early to present any excerpt from the novel. But I will share after my last post one of the “studies” I sketched out during the writing process as I explored what story would be told by the novel. That study is entitled, “EVER AFTER.”

Email ThisBlogThis!Share to TwitterShare to FacebookShare to Pinterest
Labels: MY RUSSIAN NOVEL