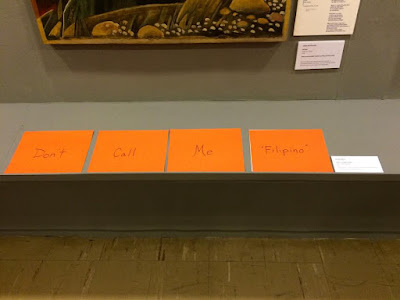 So one of the visual offshoots of my "Murder, Death and Resurrection" project is graffiti-ing the hallowed walls of the Philippine Cultural Center in Manila as art, poetry and vizpo offerings from Filipino poets and artists are exhibited as part of "Chromatext Rebooted" curated by poet Krip Yuson and artist Jean Marie Syjuco. I have to thank poet-editor Susan Schultz for helping me realize that my work would have been weaker had it been just the stark four orange pieces of paper above in its initial installation, spelling out the constipated "DON'T CALL ME FILIPINO." Instead, printouts of the poem "Excavating the Filipino in Me" helped allow for the work's complexity, per below in its final installation form (click on all images to enlarge): 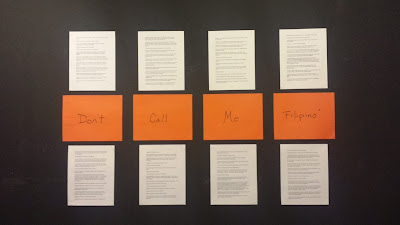 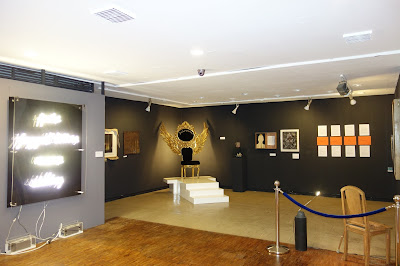 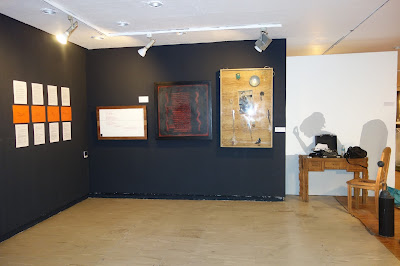 My husband looked over my shoulder at the computer screen (as I prepared this blog post) and, discerning art critic that he is, noted, "I assume you've got a reason why the paper is orange...?"

Haughtily, I replied by reading from a paper I'd previously written whilst contextualizing the project: "Since CHROMATEXT REBOOTED is an exhibition, I opted to write the words with black marker against orange paper. I theorize it by suggesting that the orange-and-black contrast is more visually dramatic than a black-and-white printout; that handwriting intensifies intimacy; and that orange is the color of a flame and it’s part of my ars poetica that A poem should burn!"

In response, my husband who knows me very well, just looked at me.

So less haughtily, I admitted: "Well, and the orange paper was what was available in the house at the time ... "


EXCAVATING THE FILIPINO IN ME

I forgot the horizon is far, is near, is what you wish but always in front of you.

I forgot one can choose always to face the horizon.

I forgot how the faces of elders bestow a haunting on others reciprocating with their own weariness.

I forgot missing teeth and gums full of potholes.

I forgot how shoulders sagged to crumbling ruins as they sat by roadsides under trees whose shade they treasured for costing nothing.

I forgot the young hugging the ground, their damp faces eagerly turning here, eagerly turning there, searching their surroundings for treasures invisible but I also believed existed when I still shared their innocence.

I forgot there is a country somewhere on the opposite of where I stand on this earth, a country whose scents stubbornly perfume my dreams.

I forgot my mistake. The radically old and the radically young are the same in their difference from me—they do not need much, they need too much. They do not ask, they must often plead.  I forgot how, unlike them, I knew what it took to survive.


I forgot to savor my childhood house where grandmother gave births with abundant abandon, where generations died more radiant than a sun’s implosion.

I forgot seashells sleeping on windowsills.

I forgot clouds of cushions recycling chicken feathers to soften every inch of narra furniture.  Stitched lace and sequin tempted viewers to believe angels never fell and a harpsichord could last for eternity.

I forgot foregoing milk for tapey rice wine as I preferred my tongue sodden—I forgot meticulousness in preserving memory as proof that someone will always remember you and me.

I forgot the Ilokano sea witnessing eighty virgin men dangling from trees to protect me.

I forgot Marisa peeling the skin from a blue-boned fish, Shakira rustling up an old clothesline for tying hands together after mosquitos bit, Doris with ears attuned to lullabyes emanating from the wings of fireflies, Luisa who squatted besides betel-chewing crones with crooked front teeth, and Marjorie who swallowed the scarless sky over Siquijor.

I forgot we accepted a colonizer’s alphabet in exchange for electricity.

I forgot when memory became a colander with generous holes.

I forgot the daughter lapsing to deception as she confronted her father's legacy as a dictator.

My favorite work from the exhibit (from what I've seen through online missives so I haven't seen everything) attests to something about me, in case you hadn't gleaned it yet from the very first image above: "Puneta," one of three fiber art works cheerfully proclaiming invectives.  The artist Jenny Ortuoste talks about her work and the exhibit HERE.  And here's moi paborito: 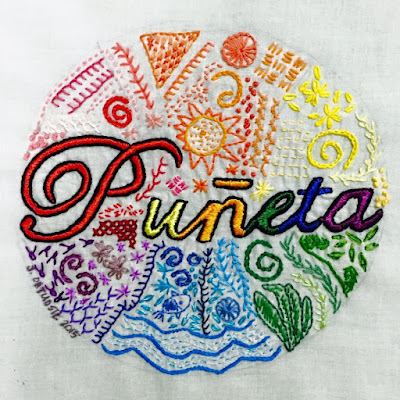 
And here are photos from the exhibition brochure -- Thank you, curator and stellar-poet Krip Yuson, for having been so open to me, ever since my early days as a poet that began last century: 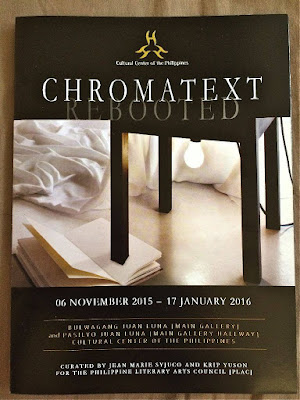 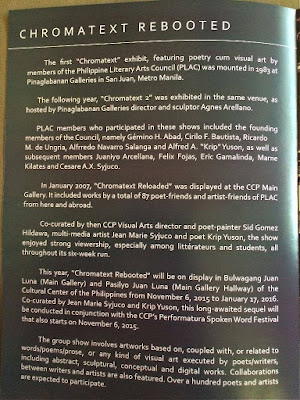 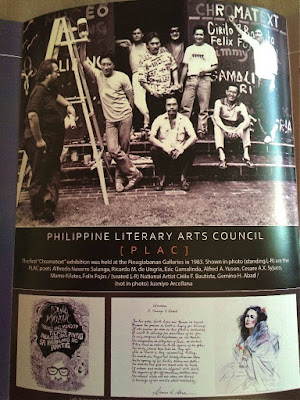 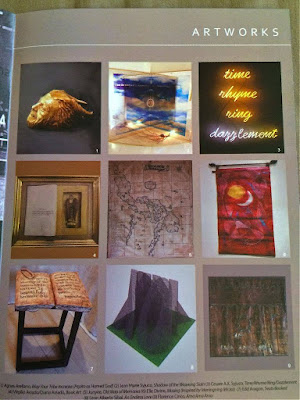 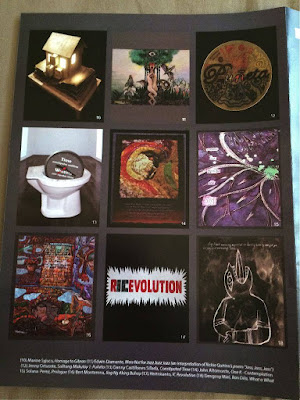 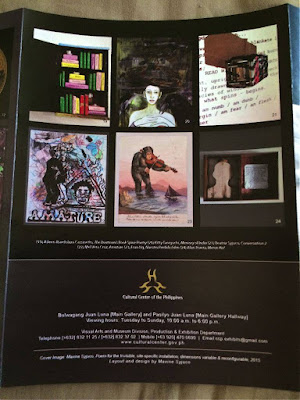