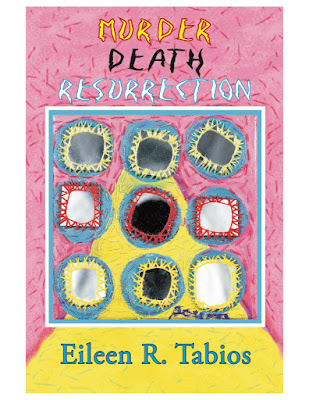 MURDER DEATH RESURRECTION is not yet officially released (that'd be February-March) but it's already garnered a write-up!

Gratitude to Leny Strobel for this engagement; you can click HERE to see the whole thing but here's an excerpt:


English has wounded me/us. In spite of my academic creds, I am acutely aware of how English limits me and how my native tongues (Kapampangan and Tagalog) would prefer to chant or sing than theorize; or how my body would prefer to do meditative qi gong than bend my brain trying to explain in English what my bones already carry and understand.

So in a way these “I forgot” poems rescue my imagination and allow me to appreciate English; perhaps be more tender towards my self’s distance from it. In the hands of a soulful and skillful poet like Eileen, these poems can be the vessel of Beauty.


I chose the above excerpt because of the reference to the poem's possibility to be a "vessel of Beauty." Despite the many ways through which humanity reveals the base side(s) of its nature, I've never wanted that to determine how I would write poems. I've never forgotten a story of the Manobo tribe in the Philippines who've had to leave ancestral lands when they got caught in the battles between government forces and communist rebels. The story I find unforgettable is how they were asked "what they wanted" during some forum in Manila. They could have responded with words like "justice," "peace," "aid" and other logical replies. But there was this one Manobo elder who replied:

"Please allow us to express our Beauty."

For Beauty to happen, certain events have to unfold -- events that involve, justice, peace, aid and so on. But the elder's emphasis on "Beauty" is telling. Similarly, I would not want injustice to dilute my own particular focus through Poetry. Holding on -- especially in a world where influence is insidious -- is both a form of truth and rebellion.

Email ThisBlogThis!Share to TwitterShare to FacebookShare to Pinterest
Labels: Babaylan Poetics, MURDER DEATH AND RESURRECTION, Poetics, Reviews of My Books