Meritage Press and copublisher i.e. press are delighted to announce the release of: 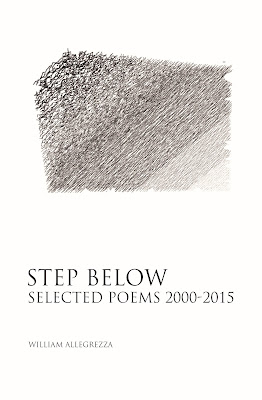 Step Below: Selected Poems 2000-2015 contains a selection of poetry chosen by the poet.  To give the reader a sense of the poet’s development, the book is arranged in chronological order.  It contains work from his major books and several texts that have now gone out of publication.  In it, we can see a sample of Allegrezza’s formal poetic innovations and can hear the pervasive lyric undertone of his work.

ABOUT THE AUTHOR
William Allegrezza is the author of many books of poetry, including Port Light (2014), Densities. Apparitions. (2011), and Fragile Replacements (2007).  He has edited several books, such as La Alteración del Silencio: Poesía Norteamericana Reciente (Co-ed. Galo Ghigliotto, 2010) and The Salt Companion to Charles Bernstein (2012); in addition, he has curated a reading series, edited presses, and edited journals.  He currently teaches at Indiana University Northwest.