Speaking of blurbs, being prolific means I've often had to deal with them -- mostly, I've found the blurb-finding process irritating (though I've been grateful for those who did provide blurbs).  By the time I released THE SECRET LIVES OF PUNCTUATIONS, I'd sort of had it with making such requests.  But for me, this meant not therefore ignoring the issue (no more blurbs!) but confronting it!   So, for my 13th poetry collection, I incorporated a blurb-performance project on the book's back cover.  That is, I presented blank lines and invited readers to respond.

Well, two fabulous folks sent me blurbs -- Stephen Hong Son and Adrienne J. Odasso.  They're actually legitimate blurb-providers based on their own achievements, but I never would have thought to approach them.  And such is how I've come to reconcile with the blurb: just another form of reader response! 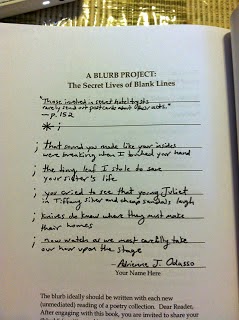 The poet begins the poem and the reader completes the poem.


(P.S.  THE SECRET LIVES OF PUNCTUATIONS hasn't received as much play as some of my other books -- though it did go to some unexpected places, e.g. Barnard Magazine featured it with sample poems, and it will also be part of an upcoming Kindle version of The Private Press (Australia)'s anthology A SLICE OF CHERRY PIE.  There are some inexpensive ($1.99!) copies over HERE.  Among my books, punctuation's many secrets are high on receiving my affection and delight.)

Email ThisBlogThis!Share to TwitterShare to FacebookShare to Pinterest
Labels: Poetics, The Secret Lives of Punctuations