Signing copies of REPRODUCTIONS OF THE EMPTY FLAGPOLE (still my top seller among the collections, though I was also more actively marketing back in the day) for Princeton Women's Book Group! 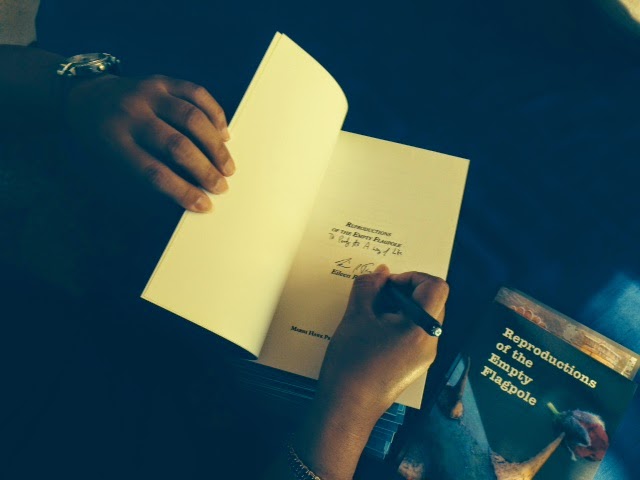 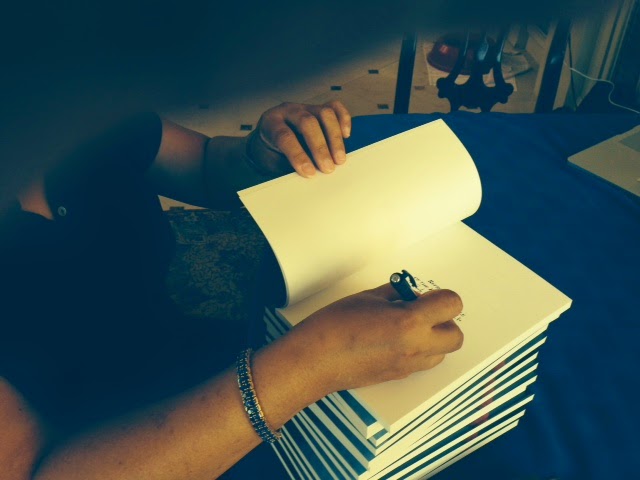 REPRODUCTIONS... was a 2002 book and if you'd forgotten -- or never knew -- that book, I had to put this together for another project so allow Moi to cutnpaste these reactions!

Reproductions of the Empty Flagpole is full of lovely, surprising conjunctions: “the sound of fireflies mating, the thin sliver of a distant moon, … no premonition for such blinding light.”
—Arthur Sze

Her poems allow our minds to be excited twice, by the psychological and artistic reference points from which the words zoom-out like handpicked bees from a hive, and by the vivid hum of the poems themselves demonstrating a captivating, utterly original imagination. In her lines, which are at once strict and sensual, Eileen Tabios inserts stingers barbed with wit and political incisiveness. The crisp, almost scientific clarity of her syntax is relentlessly undermined by fabulous leaps from sentence to sentence, by paradox, radical juxtaposition, lurking sexual innuendo, and unpredictable narrative swerve. Her is as poetics of social and cultural interrogation, in which she succeeds in uniting what she would call “the convex with the concave.”  Reproductions of the Empty Flagpole will stand you straight up.
—Forrest Gander

“And what is seeing?” asks Eileen Tabios in this volume of prose meditations on travel, eros, art, and innumerable other subjects, objects. Tabios’ answers—her seeings—come out of an amazing range of references, from Buddha to Salman Rushdie to Anais Nin to Anne Truitt to a nameless investment banker; from the Ancients to the Romantics to the Moderns and back again; from the Philippines, as from the United States. Through it all, reader and writer find themselves “losing uncertainty” through Tabios’ “eroticized history,” which earns its final exclamation, “worthy is the price: Yes!”
—Susan Schultz

How often do you come across language so lavishly expansive that any description you can think of seems laughably one-sided? Better just to slap a warning label on it: “Danger: Contents combustible on contact with reading. Includes poems so fired up they’ll sear your fingerprints off as you feel your way through them (instant identity loss). Others brilliant enough to burn after images into your retina. Handle recklessly if at all.”
—Barry Schwabsky

…exposes Tabios's search through history and art to understand her central demands-to perceive freely, to investigate color, to be a fully responsive being. "Can you pay the price for risking perception and imperceptibility?" she asks in "The Continuance of the Gaze," and then answers, "I trust in radiance. Let: Us."
—Publisher’s Weekly

This is not the world of fixed identities… It's a different world, whose poets are forging a cultural identity that is post-colonial, revolutionary, universal, and peaceful. Theirs won't be a unifying flag under one god, but one that's as various as the hands that raise it.
—Leza Lowitz, KQED Radio Show Pacific Time

Tabios has a remarkable ability to move from the abstract and the intellectual to the sensual and the tangible. She's a poet of the streets, and she's above the streets, in her own head, exploring and mapping her own consciousness where ever it takes her, even into the realm of "psychological insecurity."
—Jonah Raskin, THE PRESS DEMOCRAT

...in Tabios’ own inexhaustible experiments in the written word all schools and philosophies and deconstructivist axioms can go hang...  //  Some detractors may label Tabios’ work pretentious but that may be just another way of saying it is way ahead of its time and so would make many a new critic uncomfortable.  // Or that she has a big ego which is true of many a controversial and ground-breaking artist. But only in the sense that Mallarme and Valery and the rest of those weird, turn of the last century French poets were ground-breaking and whose very poetry was a way of life.
—Juaniyo Arcellana, The Philippine Star

Eileen R. Tabios has written a book that will leave you flipping back to the first page in hopes that you have forgotten to read a page, that one or hopefully two of the pages were stuck together somehow, and you have the chance to read more. Ms. Tabios won a National Book award for several poems in this book and one has but to read it to see why.  What beautiful and tragic imagery she provides. The language seethes with beauty
—Chris Mansel, The Muse Apprentice Guild

Unlike most poetry books that are light as feathers, their words and images floating off the page, this one is substantial in every way imaginable. Thick with imagery, subject matter, geography and precise and inspired syntax, Eileen Tabios’ work reminds me of going for a swim in the ocean—a complete envelopment in the currents of poetry. There is beauty... but her prose forms also tackle the grim and boding....Tabios’ prolific meditations on writing, living and loving in modern times solidifies her role as one of the foremost Filipino American poets of the 21st century.
—Neela Banerjee, LitPicks: New Books For You To Read, ASIAN WEEK

To my mind, the measure of a poetry book’s success would linger over questions of intellectual usefulness—the book’s continuing, viable rhetorical challenges. In that sense alone, then, volumes could be written about how and why Reproductions of the Empty Flagpole is important both for purposes of study in creative rhetorics or poetics, and as a most satisfying, pleasurable read.
—Chris Murray, Sentence: A Journal of Prose Poetics

In an age of electronic and “disposable art,” where surfing the ‘Net is akin to flipping endlessly through cable TV channels in search of reconnection in an atmosphere of isolation (calling to mind Robert Pirsig’s line from Zen and the Art of Motorcycle Maintenance that looking at nature through the car window is just more TV...), the meditative works in Reproductions of the Empty Flagpole defy the reader to simply skim and move on. The hooks are finely barbed and grab you in the deepest places.
—Joey Madia, New Mystics Review

Eileen Tabios has clearly created something new with this collection of prose poems, and her work does indeed borrow from a dizzying number of other forms of discourse, forms shaped lovingly into gardens that tempt the reader into exploring their verdant depths. But these gardens aren’t as benign as they appear at first glance, and we would do well, while walking the paths in Tabios’ book, to keep our ears alert for wild, hungry sounds in the shadows.
—Clayton A. Couch, Sidereality

I can think of Ted Hughes writing these poems, were he to use a female persona with the sensibilities and multi-cultural experience of an Eileen Tabios. Saludos!
—Luis Cabalquinto, OurOwnVoice

Her poetry exudes unabashed sensuality, artistry, intelligence, and lends itself to a reader’s surprise at their own insight.... Tabios is indeed an activist whose medium is her poetry. For the Little Brown Brother to re-write his colonizer’s language into unexpected structure and exacting, stimulating prose that comes out as poetry excellence—it is an act of activism in itself.
—Perla Daley, October 2002 “Book of the Month,” BagongPinay

If you've gotten this far in reading and don't have this book and are interested, Amazon's got a copy or two for a penny!

Email ThisBlogThis!Share to TwitterShare to FacebookShare to Pinterest
Labels: Reproductions of the Empty Flagpole