123 REVIEWED IN MY HAIKU POND! 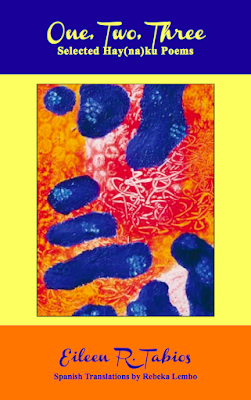 I'm grateful to Neil Leadbeater for reviewing ONE TWO THREE: Selected Hay(na)ku Poems in My Haiku Pond. You can see entire review HERE but here's an excerpt:


The longest poem in the hay(na)ku section, The Ineffability of Mushrooms, is described as a novella-in-verse. The first thing to notice about this is the title. The word “ineffability” stands out from all the other words and makes us stop in our tracks to consider its meaning before moving on to read the text. In its greater sense, ineffability is concerned with ideas that cannot or should not be expressed in spoken words (or language in general), often being in the form of a taboo or incomprehensible term. This property is commonly associated with philosophy, aspects of existence, and similar concepts that are inherently “too great”, complex or abstract to be communicated adequately but here, on a different level, it is also used in the sense of something that causes so much emotion, especially pleasure, that it cannot be described. Contrary to this notion, much is actually described about the actual art of foraging for mushrooms by man and beast, as well as their preparation and storage but, perhaps in keeping with the earlier definition of the word, the name of the speaker in the poem is not given, he is only referred to as “F”. Earlier and later references to “smoke” become ominous by the time we reach the final section of the poem:“…Later in / London, I / received //each Autumn one / precious single / bag // of dried mushrooms / and memories / then // lingering like smoke. / The last / arrived // in 1939, shortly / after the / outbreak // of war.”