"...THE GRACE OF THE MAKE-BELIEVE BED" 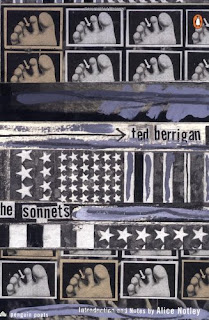 I read Ted Berrigan’s THE SONNETS this week and was struck by two specific things (in addition to my overall admiration for the work): (1) Alice Notley’s Introduction is among the best introductions I’ve read to a poetry collection … and I know why: the meticulous attention to process and form; and (2) there was this line that I found so erotic/romantic it found its way into a poem I was in the midst of writing: “To the grace of the make-believe bed”…

PUBLICATIONS
HEART THREAD, poems by Robert Kelly (the scale of and sustenance from poem is impressive! LPR #251)

STUDY & OTHER POEMS ON ART by Yuko Otomo (lovely and luminous. LPR #253)

THE SONNETS by Ted Berrigan (lovely poems, AND also perhaps the best Introduction to a poetry book I can recall reading, this by Alice Notley. LPR #254)

A YEARBOOK, poetry/memoir by Jim McCrary (sharp and poignantly sharp)

CELESTIAL JUNK, poems by Jeremy Benson (ditto, as in enchantingly quirky. Benson’s a new discovery for  me and I’m glad to know his poems!)

THE ECSTASY OF CAPITULATION, poems by Daniel Borzutzky

*  SO WHAT SO THAT, poems by Marjorie Welish

*  BECAUSE I CAN SEE NEEDING A KNIFE, poems by Noah Stetzer

THE NIGHT’S BELLY, poems by Sara Tuss Efrik, trans. from the Swedish by Paul Cunningham

*  TAIL OF THE WHALE, poems by Alice Sant’Anna, trans. from Portuguese by Tiffany Higgins

*  TO AN AVIARY, poems by Genevieve Kaplan

WATERS OF, poems by Billie Chernicoff

WE WILL SEE THE SCATTER, poems by Jasmine Nikki C. Paredes

VITILIGOD: THE ASCENSION OF MICHAEL JACKSON, poems by Amanda Chiado

ALL THE WATER ALL THE WAVES, poems by Kallie Falandays

ADVICE FROM A SIREN, poems by Shari Caplan

SELF IS WOLF, poems by Nicole Oquendo

THE UNREQUITED <3<3 OF RED RIDING HOOD & HER LYCAN LOVER, poems by Courtney Leigh

ECHO THE PILLARS OF NOTHINGNESS, poems by Maleqil Hoque

TO MOHAMMED, poem by Henry Bell

THE TRUTH, poem by Ted Joans

ELEVENELEVEN: A JOURNAL OF LITERATURE AND ART, Issue 21

LONG LIFE: ESSAYS AND OTHER WRITINGS by Mary Oliver

THE RAVICKIANS, novel by Renee Gladman

SONG OF THE YUKON, novel by Trisha Sugarek

THE FACE OF DEATH, novel by Cody McFady