I do love books and one of my greatest pleasures, as someone editing a review journal, is seeing review copies find their homes.  I posted an example in a prior blog post,  but here’s another great example: Louis Armand's Indirect Objects atop a cabinet in (next issue of Galatea Resurrects reviewer) Pam Brown's home. A second image of wine bottles is featured below because its publisher Vagabond  Press made wine labels for the book launch in Sydney. 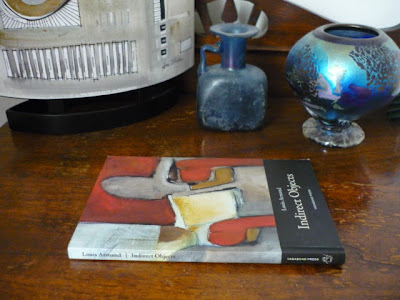 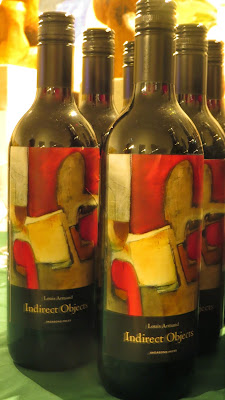 Speaking of books and wines, here's the rest of my latest Relished W(h)ines update of recently imbibed books and wines.  As ever, please note that in the Publications section, if you see an asterisk before the title, that means a review copy is available for Galatea Resurrects!  More info on that HERE. Let's find homes for those review copies--then send me a jpeg photo of the book in its new home and I'll post it!

PUBLICATIONS
HOTUS POTUS, poems by Mark Young (brilliant manuscript.  So brilliant it’ll be the next published book by Meritage Press!)

*  SONGS OF S, poems by Robert Seydel (offers much pleasure!)

THE REVOLUTION HAPPENED AND YOU DIDN’T CALL ME, poems by Maged Zaher

THANK YOU FOR THE WINDOW OFFICE, poems by Maged Zaher

*  SOMETHING CROSSES MY MIND, poems by Wang Xiaoni, Trans. by Eleanor Goodman

*  MOONLIGHT IN THE REDEMPTIVE FOREST, poems by Michael Daley

*  FACE PAINTING IN THE DARK, poems by Ann Cefola

*  A CIVILIZATION, poems by Fred Muratori

WIND IN A BOX, poems by Terrence Hayes

FOR, poems by Carol Snow

SHE HAD SOME HORSES, poems by Joy Harjo

HOME & AWAY: THE OLD TOWN POEMS by Kevin Miller

THE RIVER IS RISING, poems by Patricia Jabbeh Wesley

WHERE THE ROAD TURNS, poems by Patricia Jabbeh Wesley

ADVENTURES ON THE ISLE OF ADOLESCENCE, poems by La Loca

POEMS for the TIME CAPSULE, collected by David Watts (a wonderful anthology)

THROUGH HARSH WINTERS: THE LIFE OF A JAPANESE IMMIGRANT WOMAN, biography by Akemi Kikumura

HIT BY A FARM: HOW I LEARNED TO STOP WORRYING AND LOVE THE BARN, memoir by Catherine Friend

OFF ON OUR OWN: LIVING OFF-GRID IN COMFORTABLE INDEPENDENCE by Ted Carns

I DON’T KNOW WHAT YOU KNOW ME FROM: CONFESSIONS OF A CO-STAR, memoir by Judy Greer

THE PERFECT PUPPY: HOW TO RAISE A WELL-BEHAVED DOG by Gwen Bailey

HOW TO RAISE A PUPPY YOU CAN LIVE WITH by Clarice Rutherford and David H. Neil