To celebrate the 15th birthday of the poetic form hay(na)ku, there will be a summer exhibition, reading, and new anthology in 2018. This is a CALL FOR SUBMISSIONS for the anthology, with a working title of HAY(NA)KU 15!

Submission of Hay(na)ku Poems
—1 to 3 poems
—Poems can be the basic hay(na)ku tercet or any of the hay(na)ku variations. (If it’s an esoteric variation or one of your inventions, feel free to include a Note on Form.)
—Visual poetry is eligible if the work can be reprinted in a 6 x 9 book in black-and-white
—Collaborative submissions are also eligible
—Non-English poems are eligible if they come with English translations
—Open to all poets (you need not be Filipino)
—Submissions can be previously-published as long as the author carries rights to allow its republication. If previously-published, send with acknowledgments
—Not eligible: hay(na)ku previously published in the first three hay(na)ku anthologies as we would like to anthologize different (and new) work
—Send submissions to Eileen Tabios at meritagepress@gmail.com

Special Invitation for Students
We love having students participate in hay(na)ku projects. For example, The Hay(na)ku Anthology, Vol. II featured student hay(na)ku from a poetry class taught by Elizabeth Robinson at the University of Colorado, Boulder. If you are a teacher (all levels) or workshop instructor and would like to have students focus on hay(na)ku, with possible publication in HAY(NA)KU 15, please contact the editor! 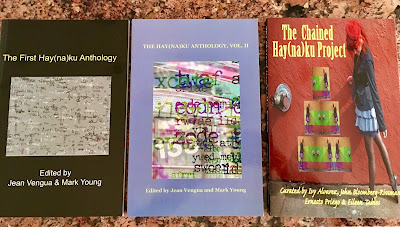