WHOAH: MY FIRST BILINGUAL EDITION! And MY HOW TO DO SELECTED POEMS

Just sitting here minding my own business and then I receive the offer for what would be my first bilingual poetry edition! Well, Thank You, Universe!  So I'm delighted to share that said bilingual edition, with its English title,

will be coming out of Bibliotheca Universalis in Bucharest. Yes: my first bilingual edition will see my poems translated into Romanian! Like I said, this was an unexpected opportunity -- I wasn't exactly strategizing on how to get my poetry into Romania. But, nonetheless, I am honored to have my poems enter the distinguished Romanian culture.

And thus I've been preparing a selection of poems that, it occurred to me after my first cut at the selections, could be a rehearsal for how I might choose what may be my favorites among the 25 million poems or so that I've written.

Precisely because I'm prolific, I've to date only chosen to do "Selected Poems" project based on form -- also, this allows readers (if they care) to see if my work has expanded the parameters of that particular form, e.g. the prose poem addressed by THE THORN ROSARY and the list or catalog poem addressed by INVENT(ST)ORY. I also have a manuscript-in-progress, HIRAETH, of Selected Poems addressing the tercet.

But for the bilingual edition, I was asked to provide (among other things) 25 poems. So how to choose the 25 poems? I can't even do a one poem per book (my preference) approach as I've written more than 25 poetry collections.

As it turns out, the answer came fairly quickly to me. There's a particular element (for lack of a better way to put it) that some of my poems have more than others when those poems tap into some stream or vein of something ineffable. All I know is that I realize I was particularly "on" or beyond myself when I wrote those poems. 99.9% of the poems in REPRODUCTIONS OF THE EMPTY FLAGPOLE contain this element (perhaps that's why it sold out its first printing in less than six months). By extension, many of the poems in SUN STIGMATA which chisel out poems from the raw material of REPRODUCTIONS ... also bear this stigmata. So, for the 25 chosen poems, 10 come from REPRODUCTIONS, 11 from SUN STIGMATA, 1 from MENAGE A TROIS WITH THE 21ST CENTURY, and 3 from AMNESIA: SOMEBODY'S MEMOIR (listed in such order below). 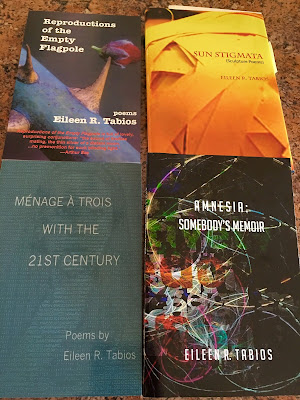 As expected after I made my selections--and as another reason why I previously avoided Selecteds not based on form--I felt guilty: 'twas as if I had played favorites among my 25 million poems. I'll live. But, for now, here's my first ever selection of just ... favorites. I can't feature all the favorites since I'm limited to 25, but this exercise is certainly useful as it forces me for the first time to consider what I've liked the most from what I've written.  Finally, I know you're dying to know so here are the Favored Poems that will comprise I FORGOT ARS POETICA:

(*UPDATE: "(ECLIPSE" was left out of the book due to space considerations)

Last but not least, my first bilingual edition is in a language I would not have expected. I might have thought Spanish, one of the Filipino languages... But I appreciate this unexpected development for reflecting how I'm not a Pin@y in the U.S., but a Pin@y in the diaspora. As noted Filipino poet-novelist-artist Eric Gamalinda once said, "The history of the Philippines is the history of the world." Romania, here I come! How might you translate the ineffable?

Email ThisBlogThis!Share to TwitterShare to FacebookShare to Pinterest
Labels: AMNESIA, Bilingual, I FORGOT ARS POETICA, Menage A Trois With the 21st Century, Poetics, Reproductions of the Empty Flagpole, Sun Stigmata