"THE AGE OF EMPIRE WAS NOT OBLITERATED, BUT MERELY MORPHED INTO THE AGE OF THE MULTINATIONALS" 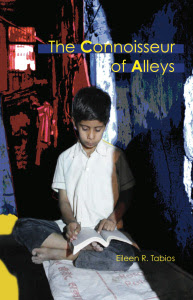 One of the greatest compliments to a poem or poetry project is when they generate new poems from an inspired reader. So I can tell you about this wonderful review that THE CONNOISSEUR OF ALLEYS just received but, happily, I can share instead a new poem that it generated!

And what I also love about the "poem-review" by Joey Madia of New Mystics Reviews is how it hews so niftily to the spirit of the Murder, Death, Resurrection project that created the CONNOISSEUR -- specifically, per Joey's description: "the following is a poem formed from 27 lines taken from my 9 previous reviews of Tabios’ work (3 lines pulled from each). Using a combination of I Ching–inspired coin tossing and one of my own random generator algorithms that I use for my experimental prose projects, the lines have been reformed in what I hope will be both a testament to not only the form and substance of Tabios’ poetic tapestry as I have written about it over the years and a testament to Tabios’ ability to inspire and co-create from afar, through the power of her words and fearless pursuit of new forms to deliver them."

I naturally appreciate Joey's comments on my work but I am more WOWED by his approach which reveal his own artistry. I love that he found my work relevant to his.  You can see the entire review HERE at New Mystics Reviews, BookMasons and Literary Aficionado, but here's the poem the "reviewing" process created (with its clever non-punctuated end/opening):

I forgot the hooks are finely barbed and grab you in the deepest places. I forgot each line begins with the phrase “I forgot” which was inspired by a Tom Beckett poem that began in the same manner. I forgot the condition of the artist and one’s Identity (geographically, sexually, psychologically) are key subjects in the considerable volume of work Tabios has created. I forgot poets have been either continually revising their poems (e.g., Whitman’s Leaves of Grass) or taking found texts, etc. to create works for a long time now…

I forgot, if poetry, like all writing, is a form of autobiography, then the path to the Truth is lined with thorns and nails and broken glass, at the end of which are myriad locks. I forgot the riches to be mined are as endless as the possibilities emerging from Tabios herself. I forgot ancient wisdom says that once you find the moon, you no longer need the finger that points to it. I forgot that we, the Readers, are the locks into which the various and sundry keys are meant to enter.

I forgot there is always counterpoint, yin and yang, light in dark. I forgot “The Color of a Scratch in Metal” and “The Fairy Child’s Prayer” are so beautiful, one could read them in meditation over and over, losing all sense of time and place and gaining new perspectives as doors are thrown wide. I forgot scores do not necessarily reflect Math aptitude, but a slew of other deficiencies in Communication. I forgot that the age of Empire was not overcome and obliterated, but merely morphed into the age of the Multinationals.

I forgot Tabios is not only a talented wordsmith, and visual artist of language—she truly is an innovator.

I forgot Dostoyevsky and Freud put forth the notion that it is impossible for an autobiography to reveal the Truth because of our penchant for self-delusion and both positive and negative exaggeration. I forgot the rich wordsmithed novels of the Victorian and Edwardian age, when books were thick and wordy because they were expensive and had to last the reader a good long while. I forgot how much I enjoy creating narrative from the nigredo of cultural reference and biographical minutiae. I forgot I’ve always admired Hunter S. Thompson and Sebastian Junger…

I forgot Oscar Wilde said that the future of fiction is to “reveal the innermost workings of [wo]man’s soul”… then the coupling of reviewer and reviewed is an essential mechanism for opening the locks. I forgot the source material is reconstituted in exquisite couplets full of enjoyable word play and just the right amount of sexual zing to bring a nearly constant smile to one’s face. I forgot it is up to the reader to find unity in disparity; to be the catalyst in an alchemical transaction (a hieros gamos) that rises beyond Reality into the etheric realms where the nigredo of our art is born(e).

I forgot many of the poems have no end punctuation, leaving the thought, the situation, the moment unfinished, as they so often are

Hola Tom Beckett! And how clever is that title that translates to "ten made from nine" (the 10th review from 9 prior reviews)!

In an earlier post at Literary Aficionado, Joey had said about my and certain others' works that we "create works that require the reader in relationship for them to reach full bloom. One cannot read their poems, nor review them, in a traditional way."I do believe this reviewer artist "got" my work! Thank you!

Email ThisBlogThis!Share to TwitterShare to FacebookShare to Pinterest
Labels: Connoisseur of Alleys, MURDER DEATH AND RESURRECTION, Reviews of My Books