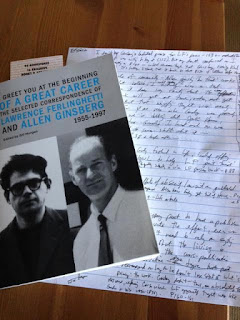 Spent part of my recent vacation reading (and annotating for a possible review) the 1955-1997 correspondence between Lawrence Ferlinghetti and Allen Ginsberg: I GREET YOU AT THE BEGINNING OF A GREAT CAREER, effectively edited by Bill Morgan. There are many gems innit, but perhaps because I include "poet-publisher" among my own roles, I'm focusing (at least this afternoon) on Ginsberg's opinions of Ferlinghetti's poems -- a section that made me wince.

I didn't wince because Ginsberg thought poorly of Ferlinghetti's poems (though he shared his constructive criticism) but because, as a topic, it was obviously not at the top of Ginsberg's list of concerns (this topic wasn't raised until page 153 of the book) and Ginsberg is a poet who pays attention to other poets. And Ferlinghetti was, at least, conscious of Ginsberg's lack of attention ... a few pages past p 153, Ginsberg offered some more notes on Ferlinghetti's poems but I got the sense (I could be misreading but I don't think I am) that Ginsberg was nicely (if belatedly) realizing that he should be more attuned to the fact that his publisher also writes poems.  Well, really, you should read this book to sense the nuances for yourself (and see if I'm being over-imaginative)...

since this is a topic that resonates to me as a poet-publisher.  As a publisher, I don't expect reciprocal attention to my work from poets I publish.  The focus in this publishing arrangement is the publishee.  But what does it mean when the publishee is indifferent to how his publisher is also a peer, also a poet?

So often, I've received surprise and/or a distinct, as if rare, pleasure as the reactions to a question I pose to my publishers or editors, "How's your work coming along?" and/or "I appreciated your work ___" followed by some question about it. This surprise is also why I don't expect my publishees ever to pay attention to my own work (though the majority, to my distinct pleasure, do).

Not sure, really, where I'm going with this.  Nowhere, I guess.

I guess I'll stop talking now about this topic which is just grimace-generating, sadly because it partly bespeaks the limited attention given to any poet's works.

Email ThisBlogThis!Share to TwitterShare to FacebookShare to Pinterest
Labels: Poetry As A Way of Life