I'm blessed to receive many complimentary copies and so my annual lists of "Bought Poetry" never reflect my total or typical reading habits. But I do want my role as a poet to include supporting others' books by purchasing them, to the extent one has the funds. I believe in putting my money where my eyes see, for instance this huge COLLECTED by Larry Eigner edited by Curtis Faville and Robert Grenier--haven't unwrapped that saran wrap yet but I love the commitment manifested through scale (I knew it was four volumes but hadn't realized the books were significantly larger than the usual 6 x 9): 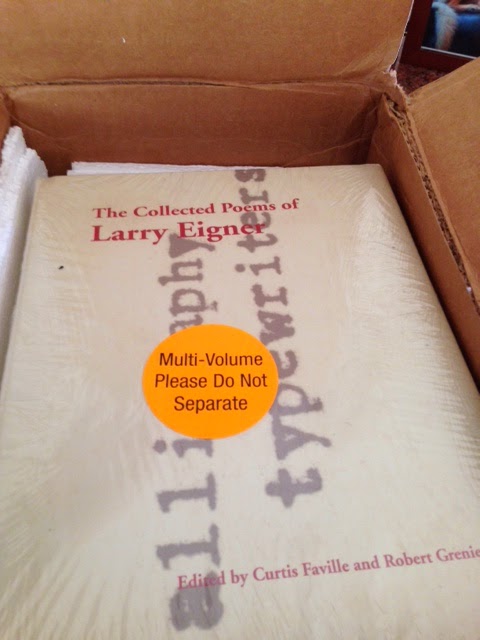 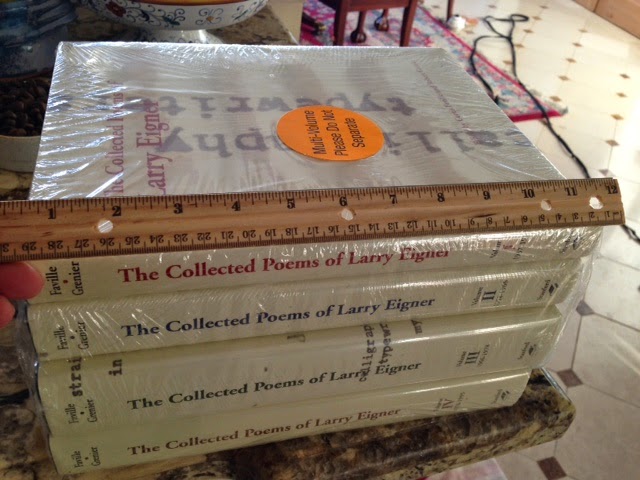 Still, I usually disappoint myself when I realize, at year's end, how many poetry books I bought (or did not buy). The list below features the 84 books of poetry, other genres but written by poets, or books on poets/poetry I purchased in 2014. It's an improvement from the prior year’s buying record of merely 58 books.  But I can still do better.  Here were 2014's purchases:

THE REEF by Elizabeth Arnold

NOTEBOOK OF A RETURN TO THE NATIVE LAND by Aime Cesaire, Translated and Edited by Clayton Eshleman and Annette Smith

CONTRABAND OF HOOPOE by Ewa Chrusciel

HOROSCOPES FOR THE DEAD by Billy Collins

THE BARONS by Joshua Corey

THE OLD LIFE by Donald Hall

SPONTANEOUS PARTICULARS: THE TELEPATHY OF ARCHIVES by Susan Howe

THE HOAX OF CONTAGION by Michael Leong

THE BLACK UNICORN by Audrey Lorde

TO KEEP TIME by Joseph Massey

THE FEEL TRIO by Fred Moten

THE OPEN SECRET by Jennifer Moxley

MISSING THE MOON by Bin Ramke

DON’T LET ME BE LONELY: AN AMERICAN LYRIC by Claudia Rankine

NOTHING IN NATURE IS PRIVATE by Claudia Rankine

THE END OF THE ALPHABET: POEMS by Claudia Rankine

THE CASTING OF BELLS by Jaroslav Seifert, Trans. From the Czech by Paul Jagasich & Tom O’Grady

OF COLLOCATED RHYTHMS by Felino A. Soriano

DRIVEN TO ABSTRACTION by Rosmarie Waldrop

BOOKS IN OTHER GENRES BY, OR ON, POETS
AN ARMY OF LOVERS, novel by David Buuck and Juliana Spahr

APOPHALLATION SKETCHES: A THEATER OF AFFECTIVE EXTREMES / STRENUOUS ESSAYS FOR THE SENSES by j/j hastain

THERE ARE THINGS WE LIVE AMONG: ESSAYS ON THE OBJECT WORLD by Jennifer Moxley

THE NOTHING THAT IS, autobiography by John Olson

HOW PHENOMENA APPEARS TO UNFOLD, essays and poetric pieces by Leslie Scalapino

WHAT POETS ARE LIKE: UP AND DOWN WITH THE WRITING LIFE, memoir by Gary Soto