NOTING THE WITNESS IN THE CONVEX MIRROR 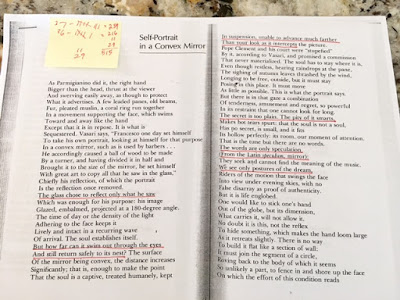 Beginning the production phase to my next book, WITNESS IN THE CONVEX MIRROR, made me think about the Selected Notes to the Poems section in the book. This is the collection of poems where each of its first 1-2 lines are from John Ashbery's poem "Self-Portrait in a Convex Mirror." I decided to share them here as possible enticement for you to check out WITNESS ... when it's released by the fantastic Tinfish Press as part of its three-part "Pacific Response" to John Ashbery's work.  Sometimes--or at least for me--the Notes to a book reveal an extra layer to the work: So FYI:


Selected Notes to the Poems:

65% Surveyed Vote Against Banning Football
The poem’s title is after Debate.org’s question “Should the NFL be banned?” (http://www.debate.org/opinions/should-the-nfl-be-banned). The poem quotes from Matthew Thorburn’s poem “Dear Almost.”

Beautiful Lovers
Written after Marina Abramovic’s TED Talk, “An Art Made of Trust, Vulnerability and Connection.”

Broken Sunlight
The indented quote is from a Facebook post by Maria Damon, May 15, 2017, quoted with permission.

Caron Poivre
Caron Poivre is cited in “The World’s Most Expensive Perfumes” by Cory Barclay, The Richest, Aug. 26, 2014

False Meteors
Written after “How The Oceans Became Choked With Plastic” by Dominique Mosbergen, The Huffington Post, April 27, 2017.

For the Dreamers
Bibliography: “White Christmas” written by Irving Berlin and the “Top 22 Benefits of Trees,” TreePeople.org

Genocide’s Point of Diminishing Returns
The incident in the poem paraphrases from John Cusack’s and Arundhati Roy’s “Things That Can and Cannot Be Said,” Truthout.org, Nov. 16, 2015.

Graceless Days
Bibliography: “Mother Earth Water Walk” (http://www.motherearthwaterwalk.com), “Plants That Clean Water” at (http://www.kellogggarden.com/water-conservation/plants-that-clean-water/)
and a Christine Balmes post on Facebook (Aug. 4, 2017) from which the poem quotes with her permission.

Integrity
Written after “My Family’s Slave” by Alex Tizon, The Atlantic, June 2017.

Marhaba Shayrat
“Marhaba” is “Hello” in Arabic; Shayrat was the Syrian area bombed by the U.S. in April 2017.

Pathos
Written after “Up close and personal with rubber sex dolls in Japan” by Alastair Himmer and Behrouz Mehri, AFP Correspondent, July 19, 2017.

Post-Death
The referenced photograph is “She was the song of my dark hour” by Paul Tañedo.

Red Pistil, White Lily
The second-to-last line of the first stanza, “You’re the one who knows better,” begins the rest of the poem which is quoted from an earlier poem entitled “Bread.”

Seasonality
“It ought to be a song” quotes Andy Bassich in “Life Below Zero,” Season 4, Episode 15.

Tense Past Tense
After the first line, the rest of the poem consists of the second and third stanzas of an earlier poem entitled “Metaphor.”

Though She Should Have Known Better Than To Play An Asian Superpower, This Poem Is For Scarlet Johannsen
Written after the controversy over Scarlett Johansson’s playing a character with Japanese roots in the movie Ghost in the Shell (her last name is deliberately misspelled in the poem’s title) and “New Study finds that men are often their own favorite experts on any given subject” by Christopher Ingraham, The Washington Post, Aug. 1, 2016.


Translating Summer
The quoted phrase is from The Dirty Life: A Memoir of Farming, Food, and Love by Kristin Kimball (Scribner, New York, 2010).

Uppity Ilokano on Louboutin Vulvas
The Ilokano “Nagadu ti ammok” translates to “I know plenty.” Bibliography: Wikipedia on the vulva and “Sole Mate” by Lauren Collins, The New Yorker, March 28, 2011.