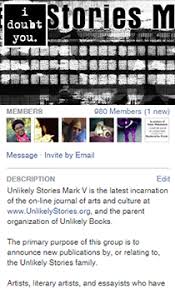 To date, I've written 113 poems for "The Ashbery Riff-Offs." And three more were just published by Unlikely Stories Mark V -- thanks to editor Jonathan Penton. Here are the poems' titles, which I list because on this blog I file:

Witnessed in the Convex Mirror: The Ascetic's Secret

Witnessed in the Convex Mirror: The Significance of Milk


Click HERE to see the poems, but here's an excerpt:

“something justifies the ecstasy we see deep withinthe naked ascetic’s eyes, and for which he discardedpossessions he once thought would form history”
—from “The Ascetic’s Secret”