MeritagePress is a literary and arts press founded by Eileen R. Tabios in 2001. The press encompasses a “Babaylan Series” focused on Filipino-authored works. The press publishes poetry but is open to other genres including memoirs and visual and performing art documents. The press originally was created to publish PINOY POETICS: A Collection of Autobiographical and Critical Essays on Filipino and Filipino American Poetics, edited by Nick Carbo. PINOY POETICS reflects Meritage Press’ belief that Filipino literature needs to receive more publishing attention on the global stage. 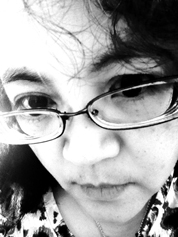 Eileen R. Tabios loves books and has released about 40 collections of poetry, fiction, essays, and experimental biographies from publishers in nine countries and cyberspace. Recipient of the Philippines’ National Book Award for Poetry for her first poetry collection, she has seen her poems translated into eight languages as well as inspire collaborations involving computer-generated hybrid languages, paintings, video, kali martial marts, modern dance, among others. She also has edited, co-edited or conceptualized ten anthologies of poetry, fiction and essays as well as served as editor or guest editor for various literary journals. Inventor of the poetic form “hay(na)ku,” she maintains a biblioliphic blog, “Eileen Verbs Books“; edits Galatea Resurrects, a popular poetry review; steers the literary and arts publisher Meritage Press; and frequently curates thematic online poetry projects including LinkedIn Poetry Recommendations (a recommended list of contemporary poetry books). After releasing a collection of short novels, she is currently writing a long-form novel. More information is available at http://eileenrtabios.com 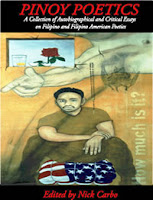 PINOY POETICS was developed by Eileen Tabios to be the first international poetics anthology of Filipino English-language poets. Poet, critic, editor and teacher Nick Carbo edits this unique and groundbreaking collection of autobiographical essays by approximately 40 Filipino poets. The poets discuss the elements inspiring and influencing their poems as well as feature sample poems that illustrate their thoughts. This project was designed to help obviate the historical silencing of voices from the Filipino community, and is appropriate—and necessary—as an educational text for various disciplines including but not limited to poetry, creative writing, multicultural studies, Filipino studies and literature, Asian American literature, humanities, the social sciences and history. A book description and ordering information is available HERE.

Super Typhoon Haiyan—known as Yolanda in the Philippines—was the largest storm ever recorded on land, affecting over 14 million people who became homeless, widowed, orphaned or saw their beloveds die or themselves died in the onslaught of water and wind. In response to Yolanda’s devastation, Filipino poets in the homeland and the diaspora rallied to create a fundraising anthology entitled VERSES TYPHOON YOLANDA: A Storm of Filipino Poets. A book description and ordering information for the anthology of 133 poets is available HERE. 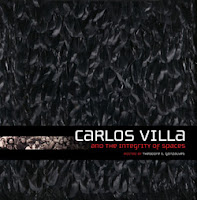 This long-overdue book takes a critical look at the life and work of one of the most celebrated Filipino American artists of our time and a leading light in the San Francisco Bay Area’s rich history of creative arts. The book includes essays and poetry by Bill Berkson, Theodore S. Gonzalves, David A.M. Goldberg, Mark Dean Johnson, Margo Machida, Moira Roth, and Carlos Villa; it also features a gallery of 77 color and b&amp;w images from Villa's career. A book description and ordering information is available HERE.

As the contest-winner for the second Filamore Tabios, Sr. Memorial Poetry Prize, Archipelago Dust is the inaugural poetry collection of Karen Llagas. A recipient of a Hedgebrook residency and a Dorothy Sargent Rosenberg Poetry Prize, she holds an MFA from the Warren Wilson Program for Writers and a BA in Economics from Ateneo de Manila. A lecturer on Filipino language and culture and Southeast Asian literature at UC Berkeley, she also co-authors 500 Tagalog Verbs (forthcoming from Tuttle) and works as Tagalog interpreter and translator. A book description and ordering information is available HERE.

Prau, Jean Vengua’s inaugural full-length poetry collection, is the winner of the first Filamore Tabios, Sr. Memorial Poetry Prize which was a global competition open to Filipino poets. Vengua's poetry has been published in many print and online journals and anthologies, including Going Home to a Landscape, Babaylan, x-stream, Interlope, Returning a Borrowed Tongue, Fugacity 05, Sidereality, Moria, and Otoliths, and in her chapbook, The Aching Vicinities (Otoliths). With Mark Young, she is editor of The First Hay(na)ku Anthology and Hay(na)ku Anthology, Vol. II. A book description and ordering information is available HERE.

The "hay(na)ku" is a poetic form invented by Eileen Tabios, as inspired by Richard Brautigan, Jack Kerouac, and Tabios' meditations on the Filipino transcolonial and diasporic experience. The form is deceptively simple: a tercet comprised of one-, two- and three-word lines. It is one of the most popular new poetic forms in recent times. In Vol. II, 51 poets from around the world participate (the prior and first hay(na)ku anthology is now out of print). Reflecting the hay(na)ku's global appeal, the book is co-published with xPress(ed) of Finland. A book description and ordering information is available HERE.

The hay(na)ku’s swift popularity would not have been possible without internet-based communication. With the internet's capacity for engendering collaborations, it was inevitable that a collaborative hay(na)ku project such as THE CHAINED HAY(NA)KU would arise. It, of course, was fitting that THE CHAINED HAY(NA)KU began with a 2007 invitation from a blog. In response, nearly a hundred poets and artists from around the world participate in this anthology. This anthology, unlike The First Hay(na)ku Anthology (now out-of-print) and The Hay(na)ku Anthology, Vol. II, focuses on collaborations between two or more authors. Reflecting the hay(na)ku's global appeal, the book is co-published with xPress(ed) of Finland. A book description and ordering information is available HERE.

This is the inaugural poetry collection of Aileen Ibardaloza, a poet and memoirist who first trained as a molecular biologist. She grew up in Manila, and studied and traveled around Asia and Europe before joining her family in the United States in 2000. Also the Associate Editor of Our Own Voice Literary Ezine, she has seen writings appear in various online and print media including Manorborn; 1000 Views of Girl Singing (Leafe Press, U.K. and California, 2009); A Taste of Home (Anvil, Manila, 2008); Fellowship; Moria Poetry; and Galatea Resurrects. A book description and ordering information is available HERE.

STAGE PRESENCE is a collection of essays by and interviews with Filipino American performing artists. It features critically acclaimed and popular artists who have also mentored hundreds of dancers, comedians, theater artists and musicians of all genres. In this rare collection, performers take time off stage to speak about their creative processes, revealing personal frustrations and triumphs, while testifying to the challenges of what it could mean to be an artist of Filipino descent working and living in the United States. Edited by musician and professor Gonzalves, the book features musicians Eleanor Academia, Gabe Baltazar Jr., Danongan Kalanduyan; bandleader and poet Jessica Hagedorn; choreographers and dancers Joel Jacinto, Alleluia Panis, and Pearl Ubungen; and theater artists Remé Grefalda, Allan Manalo and Ralph Peña. The book also includes a thought-provoking foreword by scholar and musician Ricardo D. Trimillos. A book description and ordering information is available HERE.

Michelle Bautista's inaugural poetry collection, Kali's Blade, is a unique collection of poetry, prose, and collaborations that bring martial arts to the page. Gura Michelle Bautista is a 4th degree black belt in the Kamatuuran school of Kali under the direction of Tuhan Joseph T. Oliva Arriola. She teaches Kali in Oakland, CA. She is a SF Bay Area poet and performer, having worked with Kearney Street Workshop, Bindlestiff Studios, Asian American Theater Company, KulArts, and Teatro Ng Tanan. She has been published in Going Home To A Landscape, Babaylan, maganda magazine, Eros Pinoy, Asian Pacific American Journal, TMP Irregular and MiPoesias Magazine. A book description and ordering information is available HERE.

Co-published with the University of the Philippines Press, Museum of Absences grew out of Luis H. Francia's insistent sense of the void that haunts our contemporary lives, whether because of politics, faith, history, or personal circumstance. With such themes as loss, transcendent love, and revelation, the book's three sections introduce us to a wide array of personae, from a Filipino old-timer looking back on a life of invisibility, to Cinderella in middle age, from a grandson communing with his deceased grandparents to a New Yorker responding to the horror of 9/11. However different the masks, the poet's voice remains consistently lyrical, with language heightened by irony, metaphor, and musicality. Francia has received many awards including, as author of the semiautobiographical Eye of the Fish: A Personal Archipelago, the 2002 PEN Center Open Book and the 2002 Asian American Writers literary awards. A recipient of the Palanca Poetry Prize, one of the Philippines’ most prestigious literary honors, Francia also edited Brown River, White Ocean: A Twentieth Century Anthology of Philippine Literature in English; as well as Flippin’: Filipinos on America, with Eric Gamalinda as coeditor; and, along with Angel Velasco Shaw, Vestiges of War: The Philippine-American War and the Aftermath of an Imperial Dream, 1899-1999. A book description for MUSEUM OF ABSENCES  and ordering information is available HERE.