INTERVIEW AND REVIEW RE. PAGPAG 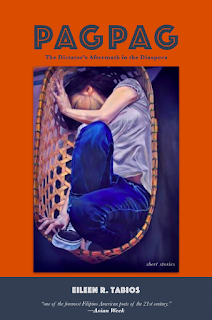 Grateful to Denise Low for interviewing me about my new short story collection PAGPAG. In the same feature, Neil Leadbeater provides a review, for which I'm also thankful. Here are excerpts below, but you can see both interview and review HERE.

These stories (except for one I added to cohere the collection) were published from 1995-2000; they represent me as a newbie creative writer, and I do not write the way I wrote back then. But I decided to re-issue them as a book in protest against the cruel policies of current Philippine president Rodrigo Duterte as well as his complicity in rehabilitating the reputation of the family of Martial Law dictator Ferdinand Marcos. I thought it important to remind people that Martial Law occurred, was damaging, and offers a legacy wherein junior-Marcos-type politicians undeservedly thrive to the detriment of the Filipino people they are supposed to serve.

from Interview with Denise Low

Throughout this collection, poverty is described in all its forms and not just in terms of a lack of money. It is also seen with reference to a lack of opportunity and, more importantly, a lack of being able to make one’s voice heard and a lack of being able to do anything about it. There are old men and women sleeping on hard surfaces, small farmers forced out of business, companies stripped of their assets and a displaced population from Calauit who end up dying of starvation....

There is plenty of variety too, ranging from the politically charged “Force Majeure” and “Redeeming Memory” to the politically correct “Homeland” and the comic “Pork” and “Tapey.” Ghosts are present in at least three of these stories, but there is a sense in which they haunt every one of them as Tabios confronts her past.

from review by Neil Leadbeater

Email ThisBlogThis!Share to TwitterShare to FacebookShare to Pinterest
Labels: Interviews of Moi, PAGPAG, Reviews of My Books