NOW ON YOUTUBE:
“In The Dictator’s Aftermath: Conversation and Book Launch for PAGPAG: The Dictator's Aftermath in the Diaspora by Eileen R. Tabios” 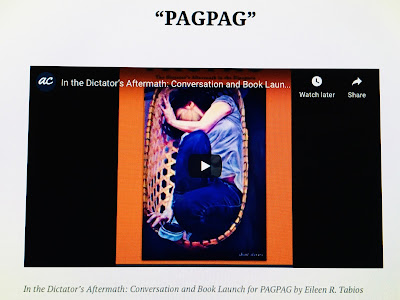 These excerpts don’t do justice to what everyone shared. It gets more immense—darker and deeper, too—amidst—or despite—the laughter. The conversation is timely, wide-ranging and I invite you to watch this video. I wrote the book but it’s not about me; it’s on Empire, memory, colonialism and its postness, fascism and the use of humor to take it down, race, history, the frailties of the human condition, indigeneity, the flux of language, Brecht, Bahktin & Benjamin, and then hunger on too many levels, and so on and so much more. AND we name the names of those “salvaged.” Some excerpts:

As we grapple with ways to fight media repression and the Anti-Terror Bill in the Philippines, Eileen Tabios presents us with PAGPAG. … the book is a joy to read because it makes us laugh, for if there is one thing I remember about being an activist during Martial Law, …it is that we used laughter. We mocked those in power, and drawing from Mikhail Bakhtin’s discussion of the carnivalesque, this laughter was necessary in the “de-crowning” of the dictator. Moreover, the book also reminded me of family and friends who managed to joke even during dark times, of political work made lighter by shared laughter, and how, amidst fear of detention, we made up funny songs…
—Joi Barrios

The many definitions of “pagpag” includes how Ferdinand Marcos’ son asked Cambridge Analytica to “rebrand” his family’s image… to [visual pagpag] of slapping one’s cheeks to prevent one from becoming numb to all the murders. “In the Bible, Jesus says ‘if any place will not welcome you or listen to you, leave that place and *shake the dust off* your feet as a testimony against them’.”
—Father Albert Alejo

Pagpag-making, in this sense, for all its contradictory significations, like Eileen’s skillful reworking of painful and grievous memories of the Marcos regime into stories of alternative meaning, delight, and pleasure, may be seen as gesturing toward that kind of capacity for beauty and life-making in the direst of circumstances—I would say perhaps a skill those of us still ensconced in the comfort of our privilege could well learn from.
—S. Lily Mendoza

I teach “Race and Humor” at Stonybrook. The theory of humor that I love to share with students is the theory of inversion, the reversal of power. We laugh when the cruelties of the world are exposed. We laugh when the powerful are made fun of, and they’re taken down by joke … in this case by a story. Fascists hate humor because humor threatens their order, the order that they want which is that they’re on top. Humor brings them down to the level of the people.
—Nerissa Balce

…[PAGPAG] gives us a glimpse of not only of where we came up short, but also why today too many lessons are learned the hard way. In one of Pagpag's pieces, Eileen Tabios points in the story “A Ghost Haunting” to one of several reasons why many are wrestling with a deep sense of unarticulated anomie: "The optimism in my memory is a taste of rust, jarring against what I observed the country had become. The optimism is an ache that will not go away. It is a ghost haunting." // She is describing the Philippines but it can just as well be the United States. Or Brazil. Or India. Think of the fireflies reminding us of the rubble of institutions crumbling from the combined force of neglect and official venality.
—Renato Redentor Constantino

I only decided last year to collect the stories into a book after observing the human rights atrocities caused by Duterte’s regime. I thought then that even as my stories are fiction, my book PAGPAG might serve to remind how actions have such prolonged effects. The book’s idea of presenting fictionalized children of anti-Marcos activists, now grown-up and coping with their legacies, is also a metaphorical call for bettering our actions as actions do become legacies and can have impact for generations afterward.
—Eileen R. Tabios 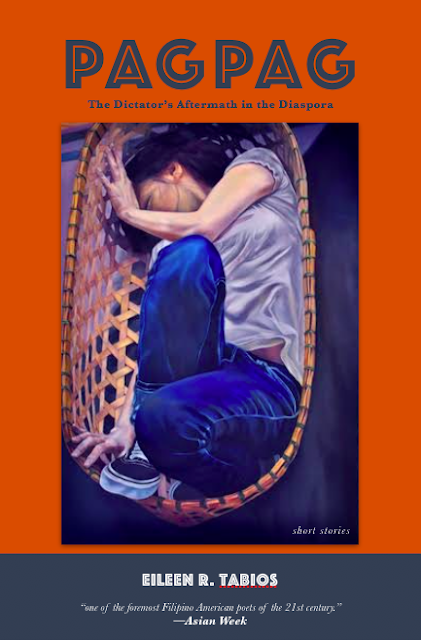 Email ThisBlogThis!Share to TwitterShare to FacebookShare to Pinterest
Labels: PAGPAG, Poetry As A Way of Life