Deep gratitude to Erica Goss who reviews my Selected Hay(na)ku Poems at her Sticks & Stones Newsletter. Erica's newsletter features a variety of interesting readings--you can sign up for it HERE. Here's the current issue's contents:
MY NEW BOOK, STONE empty chair

And here's my review! 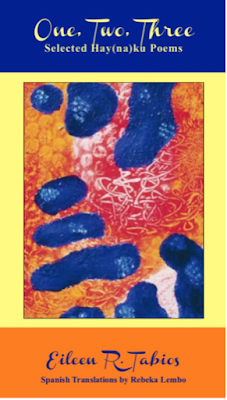 In One, Two, Three: Selected Hay(na)ku Poems, Eileen R. Tabios, creator of the hay(na)ku, proves that she is not only adept at invention, but also at exposition. The collection contains hay(na)kus and variations of the form, as well its history, description, a selection of hay(na)kus written by Vince Gotera, and seven poets’ comments about the form. This book is part poetry collection, part manual, and an invitation to participate: at the end of the introduction, Tabios writes, “I hope this collection encourages readers to try their hand at the hay(na)ku!”

A hay(na)ku is a three-lined poem with one word on the first line, two words on the second, and three on the third. As Tabios writes in the chapter, “The History of Hay(na)ku,” the form started out as a “Filipino haiku;” eventually she renamed it “hay(na)ku,” and notes “’Hay naku’ is a common Filipino expression covering a variety of contexts—like the English word ‘Oh.’” The chapter includes a list of hay(na)ku variants: “ducktail,” “melting,” and “worm” are just a few. In creating this form, Tabios meant for it to become “a community-based poetic form; this fits with my own thoughts on the poem as a space for engagement.”

Deceptively simple – just six words, no rhyme, meter, or complex patterns – hay(na)ku creates resonances within its tight structure. Each hay(na)ku is a complete poem or a stanza in a longer series. For example, the first stanza of “Post-Ecstasy Mutations,” reminiscent of Emily Dickinson in its use of dashes and capital letters, seems complete:

and the next stanza seems dropped in from another poem:

but by the third a leaping intelligence begins to form within the six-word stanzas:

fail
to include
despite royal lengths—

One, Two, Three includes a Spanish translation. Translating poetry is always a tricky proposition; hay(na)ku, however, with its emphasis on brief, pithy lines, forces a limit that seems to make word-for-word translation possible. Indeed, the translator, Rebeka Lembo, preserves the word-and-line structure in almost every poem. Consider “Maganda Begins” (“Comienza Maganda”), a reverse hay(na)ku. The Spanish and English poems appear side-by-side, Spanish on the left and English on the right. The poem’s beginning stanzas:

“Maganda,” Tagalog for “beautiful” and also, as the epigraph states, “the name of the first woman in a Filipino creation myth,” adds yet another language to the mix, emphasizing Tabios’s goal of creating inclusivity in poetry, and that poetry be a place for an ever-shifting mix of ideas, languages, and forms.

The variant, haybun, combines hay(na)ku poetry and prose similar to the traditional Japanese form haibun, which combines haiku and prose. In 147 Million Orphans (A Haybun), Tabios explores the experiences of orphans (147 million is an estimate of the number of orphans alive in the world). The prose paragraphs in each haybun expand on the words in its accompanying hay(na)ku. In “Haybun MMXII,” she writes

To learn his new language, the adoptee was
charged with learning 25 new English words a
week during the schoolyear…”Weekend,
weekday” – such common terms…


Eileen R. Tabios is an imaginative and tireless experimenter with words and ideas. One, Two, Three: Selected Hay(na)ku Poems is not only an enjoyable read, but also inspiration: it’s almost impossible to resist writing one’s own hay(na)ku. Tabios’s project reminds us that words matter most in poetry, and that, surrounded by white space, six words have the power to move us in unexpected ways.


Eileen R. Tabios loves books and has released over 50 collections of poetry, fiction, essays, and experimental biographies from publishers in nine countries and cyberspace. Her 2018 poetry collections include HIRAETH: Tercents From the Last Archipelago; MURDER DEATH RESURRECTION: A Poetry Generator; and the bilingual edition of One, Two, Three: Selected Hay(na)ku Poems. With poems translated into seven languages, she also has edited, co-edited or conceptualized ten anthologies of poetry, fiction and essays in addition to serving as editor or guest editor for various literary journals. She maintains a biblioliphic blog, “Eileen Verbs Books“; edits Galatea Resurrects, a popular poetry review; steers the literary and arts publisher Meritage Press; and frequently curates thematic online poetry projects including LinkedIn Poetry Recommendations (a recommended list of contemporary poetry books). More information is available at http://eileenrtabios.com.