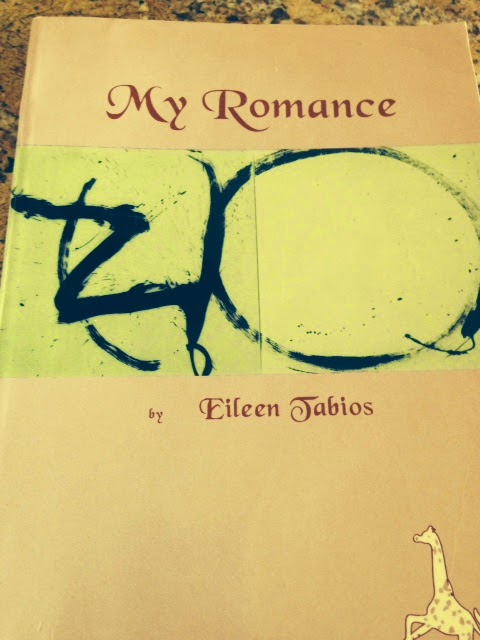 Mom was a reader long before she became, or publicly became, a writer.  So it'll take quite a while for me to go through the library she left behind.  Today, I stumbled across something very special -- her copy of my art essay collection, MY ROMANCE.  It was interesting for two reasons:

First, slipped between its pages was an autumn-colored leaf.  I wish we had a chance to discuss this season we don't experience in our birth land, the Philippines.  Here's the leaf: 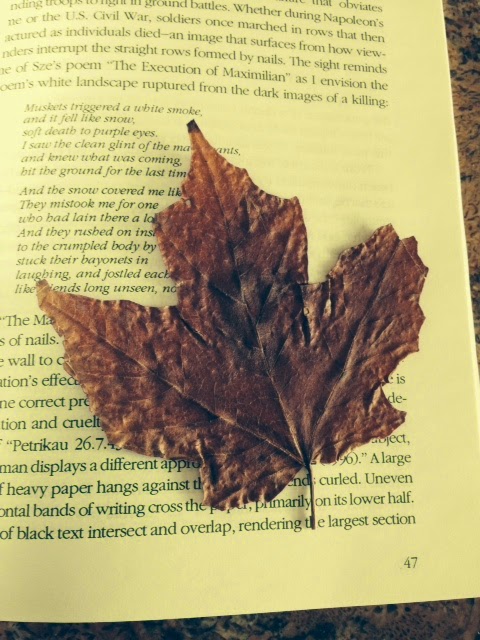 I wonder if she was as awed as I was at my first sighting of an autumn leaf.  For me, it was freshman year in college -- I left Los Angeles for New York City where campus trees dropped their alien-colored leaves to mark autumn.  I was so enamored with their orange-gold, russet and other non-green colors that I slipped such colored leaves into letters I would mail back home to California (no emails then).  I was a free-lance correspondent for my local newspaper in California and I believe I might even have written a column on autumn leaves.  So Mom was just as taken with autumn ...

Second, slipped into my book was a review of the book that I don't recall ever seeing.  I can't tell the name of the newspaper from the clipping, but Mom handwrote La Solidaridad atop the clipping so I assume that's the paper's name.

And the reviewer's name?  Leny Mendoza Strobel!  So I emailed her about it.  She doesn't remember it!  Leny needs to write some "I Forgot" poems ...!  I'll be sending Leny a copy.  But Dear Leny, it begins:

"I wished to write a book as a Love Poem."

This line alone, which ends the book's Introduction, was enough to make me teary-eyed.  The idea of a book about Art written as a love poem is new to me.  Art is often perceived as belonging to a realm beyond the common and everyday.  Art as the embodiment of all that is sublime in human aspirations.  Art as the manifestation of the best that human nature is capable of.  Art as something to be found beyond glass cases in a gallery or museum where one is allowed to gaze but not to touch.  Art as something to be admired and to be awed by.

...[On the other hand,] Eileen's approach in this book is the approach to Art as something to be engaged with, Art as a way to engage the world.

"Everything I've said today took a lifetime to get here," Eileen quotes the poet Eric Gamalinda.  Here, Eileen demonstrates how her life-long romance with Art also becomes a poetic engagement with the world: the world that includes history, politics, identity, and spirituality.  Indeed, all of life. 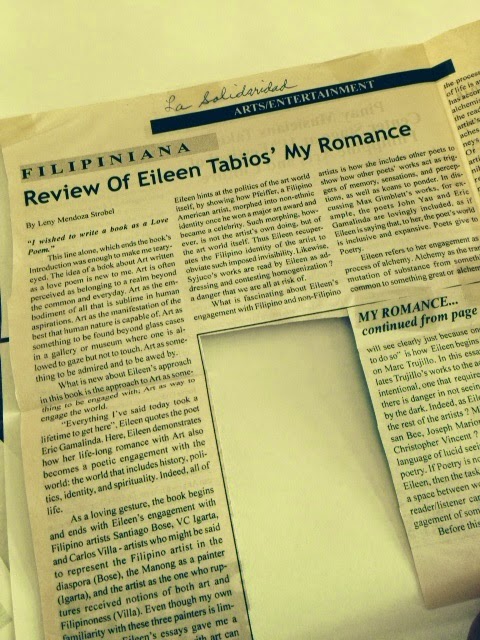 Email ThisBlogThis!Share to TwitterShare to FacebookShare to Pinterest
Labels: Life With Mom, MY ROMANCE, Reviews of My Books