That saying about judging a person by the company said person keeps?  Can’t say that about poetry books in a bookstore—not that I’m judging!  Am just happy my books made it into ANY bookstore!  Here’s a photo of some of my books and what surrounds them in a bookstore: 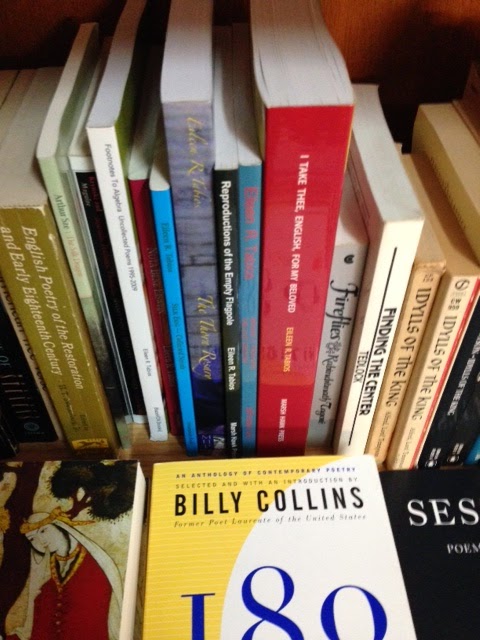 Speaking of books, here's the rest of my latest Relished W(h)ines update of recently imbibed books and wines.  As ever, please note that in the Publications section, if you see an asterisk before the title, that means a review copy is available for GalateaResurrects!  More info on that HERE.

PUBLICATIONS
PORT LIGHT: A HAY(NA)KU COLLECTION, poems by William Allegrezza (read in manuscript as it’s the next book to be published by Meritage Press.  So, obviously: OUTSTANDING!)

RED BOX OF BLUES, poems by Ryan Gallagher (favorite poem among many enjoyed is probably “And the Gods Make Love.”  LPR #127)

I DIDN’T KNOW MANI WAS A CONCEPTUALIST, poems by Desmond Kon Zhicheng-Mingde (smart and elegant. LPR #128)

THE OLD LIFE, poems by Donald Hall (wonderful mastery of the long poem. To be an LPR recommendation)

SMALL WORKS by Pam Rehm (thoughtful and delicate.  To be an LPR recommendation)

THE WHOLE MARIE, poems by Barbara Maloutas (lovely. To be an LPR recommendation)

OPEN NIGHT by Aaron Lowinger (ravishing. To be an LPR recommendation)

ON LIBERTY, REPRESSED, poems by Tom Jenks (thought-provoking such that it compelled me reviewing it for next GalateaResurrects)

THE LANDFILL DANCERS, poems by Mary Kasimor (liked “water for mrs lot” and “pray for the stone”)

AS WATER SOUNDS, poems by Sunnylynn Thibodeaux (steel with delicacy or delicate steel)

NOT FOR YOU ALONE, poems by Robert Murphy (lovely chap. Read chap and listened to CD – the auditory is as fine as the words)

BEYOND THE CHAINLINK, poems by Rusty Morrison (stellar. Language matured like fine wine)

A DISTURBANCE IN THE AIR, poems by Michele Poulos (a natural)

OF COLLOCATED RHYTHMS, poems by Felino A. Soriano

*  MUM IS DOWN, poems by Oscarine Bosquet

*  AFTER LUNCH WITH FRANK O’HARA, poems by Craig Cotter

COMES UP TO FACE THE SKIES, poems by Steve Gilmartin

*  LOVE, OF A KIND, poems by Felix Dennis

SKY LANTERNS: NEW POETRY FROM CHINA, FORMOSA AND BEYOND, Edited by Frank Stewart and Fiona Sze-Lorrain

THE DIFFICULTIES, Vol. I, Nos. 1 and 2, edited by Tom Beckett (six numbers or Volumes of this magazine were published between 1980 and 1989.  They’re now available online at http://eclipsearchive.org/projects/DIFFICULTIES/difficulties.html to present a lovely recovery project.  I plan to read the entire series).

A BROOM OF ONE’S OWN: WORDS ON WRITING, HOUSECLEANING & LIFE, memoir by Nancy Peacock

EVERYTHING TO LOSE, novel by Andrew Gross

Email ThisBlogThis!Share to TwitterShare to FacebookShare to Pinterest
Labels: Relished W(h)ines, Where My Poems Are Appearing