THE SUN IN HARDBACK!

And it's official!  SUN STIGMATA (due out in October/November) will be released first in hardback.  So, we had to prepare a dust jacket -- the paper cover that wraps around the hardbound book.  As we'd initially prepared the design for a paperback cover, we had to adjust the cover to incorporate side flaps (those pieces that fold over the covers).  Which meant we had to come up with text for said side flaps.

The front side flap was easy -- put on a sample poem.  I'd ran out of ideas by the time we got to the back side flap (the blurbs were used for back cover).  So I scratched my beleaguered head.  Then decided to reprint from a "previously said review" about moi.  I chose this because it had relevance to SUN STIGMATA and, more importantly, it amuses said moi:


Who is the author…? Is it Eileen R. Tabios, prolific Filipino-born poet, editor, blogger, Barnard graduate, California resident, and daughter of Filamore B. Tabios, Sr.? Or is it Eileen R. Tabios, the author-function (as Michel Foucault would have it), the “discursive set” revealed to the reader through cross-hatched trajectories of history, culture, ethnicity, gender, and the borrowed vocabulary of other writers similarly constructed? Or could it be—in a sense that Coleridge might have approved—the Eileen R. Tabios who is neither person nor socio-linguistic nexus, but the instrument of a “synthetic and magical power” that achieves its presence in the unique, transcendent moment of the poem itself?

To answer “all of the above” would be equivocal, but not inaccurate, since The Light Sang engages the nature of authorship from multiple flanks. In his essay “From Work to Text,” Roland Barthes asserted that “the Text is always paradoxical,” so we might be prepared to find that Tabios has assembled here an omnibus of paradox and exploration, at once textual and visual; private meditation and public discourse; self-conscious to the precipice of solipsism yet inclusively polyphonic; postmodern in concept but Romantic in spirit. It is less a book of poetry than a complex: a virtual, almost accidental honeycomb where disparate forces converge and thrive without necessarily coalescing into a stable structure.
—Fred Muratori in American Book Review, reviewing THE LIGHT SANG AS IT LEFT YOUR EYES: OurAutobiography (Marsh Hawk Press)

Next, to deal with Missy Scarlet who walked on me all night.  She wanted me to use this as my Author Photo. That's why, she mewled, she posed so prettily by books: 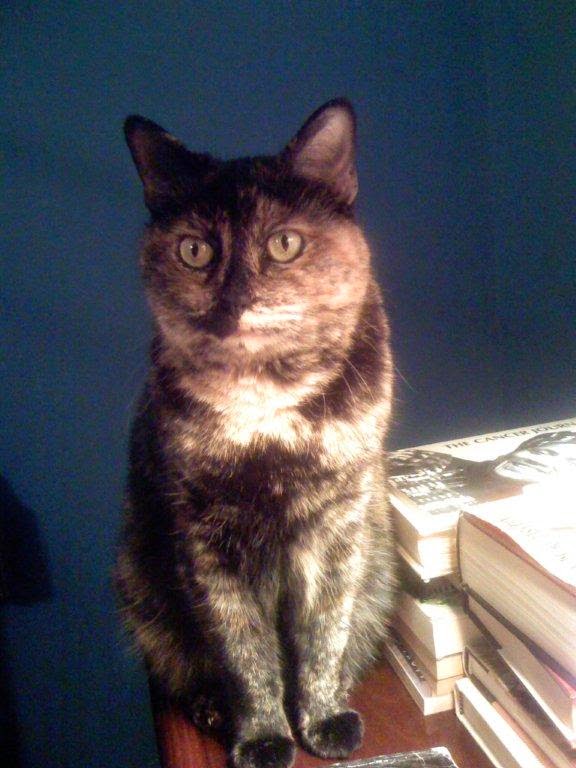