THE SUN ALIT IN BOSTON 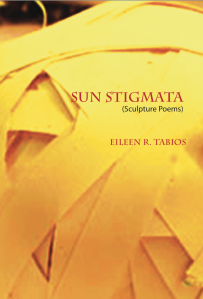 As publisher of Muddy River Poetry Review when it was still in its printed form, Zvi A. Sesling is an editor who published probably one of my first five poems to get published.  Eighteen years later, he's reviewing SUN STIGMATA.  It's both a kick to him and me that he's able to review a book (the 28th book!) of a poet he published when she was just months into writing poems.  I'm blessed to have such people in the poetry world.  And I thank him for his review in Boston Area Small Press and Poetry Scene.  Here's an excerpt for what he has to say about SUN STIGMATA (a few typos in there but feel free to ignore them as I did):


…her poetry is reminiscent of Joseph Conrad who learned English around the age of twenty-nine and then wrote some of the great stories of the English language. I dare say there are few poets who can use the English language as well, as mysteriously, as excitingly as Tabios does in all her books and especially in this one.

Email ThisBlogThis!Share to TwitterShare to FacebookShare to Pinterest
Labels: Reviews of My Books, Sun Stigmata