I am so pleased to announce Meritage Press' latest new title: HOTUS POTUS by Mark Young! 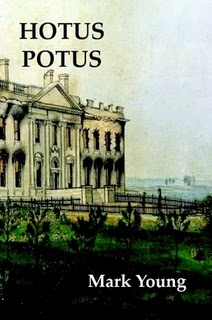 The 20th century cliché was that POTUS was the most powerful man in the world. We’ve since realized that that’s a load of hocus pocus, but, before that revelation, Mark Young committed his life to carrying around a heavy tape recorder in order to document for posterity the utterances of the forty-four Presidents of the United States. Now he has sifted through the more than 200 years of those recordings in order to bring to the reader the cream of the cream, HOTUS POTUS, presidential insights from an assembled cast that includes slave owners & supporters of emancipation; governors, generals, & those who never saw war but still won one for the gipper; rough riders & builders of smooth highways. Liars & truthtellers. So far there are no women. Let’s hope that changes soon.

ABOUT THE AUTHOR:
Born in Hokitika, New Zealand and now living in North Queensland in Australia, Mark Young has been publishing poetry for fifty-five years. His work has been widely anthologized, & his essays &poetry translated into a number of languages.

He is the author of more than twenty-five books, primarily poetry but also including speculative fiction & art history. His most recent books are the eclectic world from gradient books of Finland, and a chapbook of visual poems, Arachnid Nebula, from Luna Bisonte Prods.


He is the editor of the online and print journal Otoliths.