My reading habits in 2019 were significantly different from the way I read in previous years due primarily to two reasons: 1) I focused on finishing my novel and looking for publication opportunities for it; and 2) I embarked on a new collection of miniature books ("miniature books" are books no larger than 3x3 inches in the U.S. or 4x4 inches internationally). I actually read more miniature books than normatively sized books this year. I list below 2019's "Relished Reads." But, first, a current picture from my Miniature Book Library: 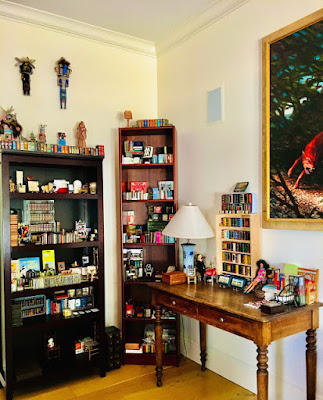 PUBLICATIONS
Lists below are divided among Poetry, Fiction, Memoir/Biographies, Other, and Miniature Books.

A CELL OF FALLS, poems by Kimberly Alidio

SONGBOOK FOR A BOY INSIDE, poems by Laura Buccieri

HEDGE FUND CERTAINTY, poems by Thomas Fink (fabulous, such that I decided Meritage Press will publish it).

AFTER HERACLITUS, poems by Jesse Glass

THE LANGUAGE SIGNIFIER: VISUAL WRITING AND ECOLOGIES OF DIMENSIONALITY by Tom Hibbard

ALL THE FIRES OF WIND AND LIGHT, poems by Maya Khosla

FORMER POSSESSIONS OF THE SPANISH EMPIRE, poems by Michelle Penaloza

I WANT TO WRITE AN HONEST SENTENCE, poems by Susan M. Schultz (LPR #289)

HOW TO KNOW THE FLOWERS, poems by Jessica Smith

HOW THE UNIVERSE IS MADE: POEMS NEW & SELECTED 1985-2019 by Stephanie Strickland

DRINKING FROM WHAT I ONCE WORE: SELECTED AND RECENT POEMS by Chris Stroffolino

THE IN(TER)VENTION OF THE HAY(NA)KU: SELECTED TERCETS by Eileen R. Tabios

WITNESS IN THE CONVEX MIRROR by Eileen R. Tabios

THE BOX IS THE WOMB OR, poems by Elizabeth Workman

AMERICA IS NOT THE HEART, novel by Elaine Castillo

RUN AWAY, novel by Harlan Coben

THE RISING SEA, novel by Clive Cussler and Graham Brown

CHRISTMAS AFTER ALL: THE GREAT DEPRESSION DIARY OF MINNIE SWIFT by Kathryn Lasky

HARD-BOILED WONDERLAND AND THE END OF THE WORLD, novel by Haruki Murakami

THE GIRL BEFORE, novel by Rena Olsen

THE CORNWALLS ARE GONE, novel by James Patterson and Brendan DuBois

A LIGHT IN THE MIDST OF DARKNESS: THE STORY OF A BOOKSHOP, A COMMUNITY AND TRUE LOVE by Wallace Baine

THE STRANGER IN THE WOODS: THE EXTRAORDINARY STORY OF THE LAST TRUE HERMIT by Michael Finkel

ZELEI BELA: THE CENTRE OF THE WORLD, biography by Kurti Laszlo

BIBLIO-STYLE: HOW WE LIVE AT HOME WITH BOOKS by Nina Freudenberger

Re. Miniature Books (8 normative-sized and over 1,000 miniature books)

THE POET OF THEM ALL: WILLIAM SHAKESPEARE AND MINIATURE DESIGNER BINDINGS FROM THE COLLECTION OF NEALE AND MARGARET ALBERT

THE LARGE WORLD OF MINIATURE BOOKS by Robert Hanson

THE PISTNER HOUSE: A MASTER IN MINIATURE by Patricia Pistner

TASHA TUDOR’S DOLLHOUSE: A LIFETIME IN MINIATURE with text by Harry Davis and photographs by Jay Paul

THE HISTORY OF MINIATURE BOOKS by Doris V. Welsh

Over a thousand miniature books read from this Miniature Book Library that was created in 2019. 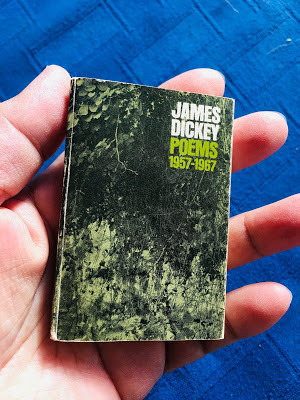