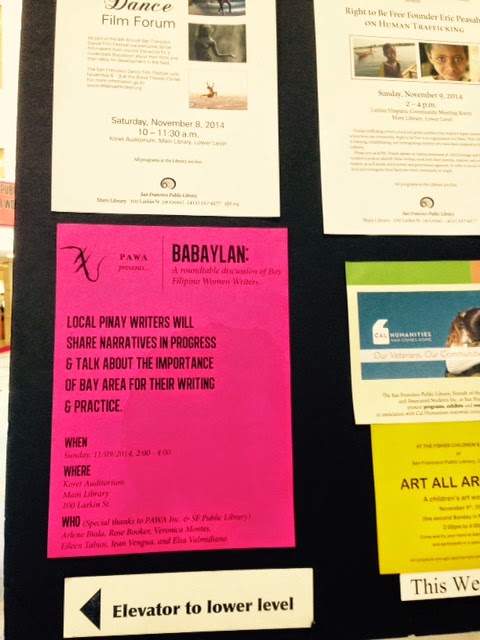 It was wonderful to participate in the Pinay Writers Panel yesterday in San Francisco curated by Barbara Jane Reyes.  I enjoyed the other writers' participations because

Arlene Biala--among other things, she presented a suite of poems that seem to take off from doll descriptions from the "The American Girl" -- it is a wonderfully imaginative approach. Arlene would read descriptions of certain dolls and then she had fellow presenter Veronica Montes read her poetic riffs offa said descriptions.

Rose Booker--whose series of poems utilize "dragon" for a creative reason: I hadn't known--until Rose explained its etymology--that the word dragon actually comes from governess, specifically someone who is protective of its charges.  Quite a diff from the fire-breathing monster that's often associated with the dragon.

Veronica Montes--as I whispered to her, I would have cried (being an Ilokana from Ilocos Sur) after her story but I was up next with my presentation.  She presented a moving excerpt from her fictionalizing what happened to the mother of Gabriela Silang, a mom about which little is known.  I've got a lot of empathy with this approach: recovery and de-silencing (I once did a poem for the mother of Zahera Jolie-Pitt for similar reasons).

Elsa Valmidiano--2nd-generation Fil-Am.  A lawyer who chose not to practice law but to write instead.  A moving family history about the 2nd-gen (vs. 1st-gen)'s choices to choose jobs not to survive but presumably what makes one happy.  She also had a wise presentation about the internal conflicts within "Filipino community" and how as far back as with anti-Spanish colonial rebels, internal dissent pitted Filipinos against each other.

Jean Vengua--so many things taken from Jean's presentation of the artist and activist life.  I was struck by, among many things, her story of how she curated various Filipino history exhibits and how there was such a strong pushback against depicting the Filipina woman in other roles besides Beauty Queen, Wife .... pushback against presenting the ambitious Pinay who might want to be a scholar, lawyer, activist... 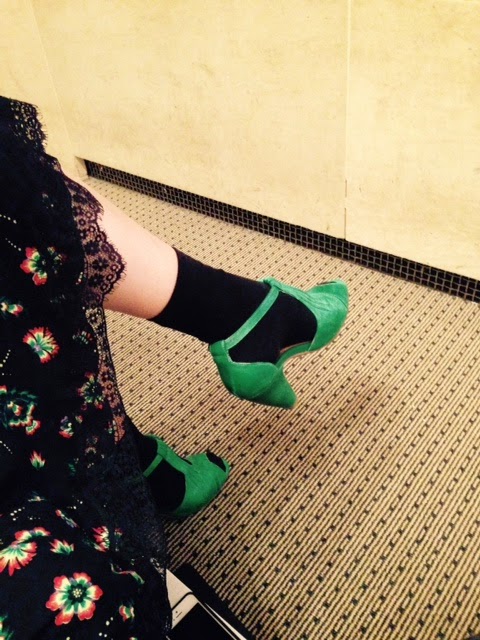 Just from the above brief notes scribbled when I wasn't looking at Veronica's fabulous green shoes, you can tell that the presentation had much carne as well as pancit.  Oh, and the sponsor Philippine American Writers and Artists did actually serve pancit and lumpia for refreshments!  I have to note, though, that it says something about this audience that this is the first time Moi, Filipino food-starved as I am here in St. Helena, didn't get A. Single. Bite. of that Pinoy food.  Escandalo!

Where was I?  Oh yes -- the theme of the panel related to narratives.  And narrate we did.  By the way, I'd love for someone to curate a similar panel on form.  At one point during the presentation, I mentioned language but it was a side comment as the focus was on actual content and stories.  But there's a lot happening in literary form--an example would be the book I picked up during the event: Angelica's Daughters by Veronica and four other fictionists, Cecilia Manguerra Brainard, Erma Cuizon, Susan Evangelista and Nadine Sarreal.  A single novel written by five writers--something that could be easily theorized within a Filipino frame (community, interconnectedness, kapwa etc, anyone?).  Curator Barbara Jane Reyes  and Jean Vengua also are doing interesting stuff in poetic form.  Me? Hay(na)ku and the "Murder, Death and Resurrection" poetry generator, among others.  Yes, I'd like to see a focus on form -- I mentioned something during the Q&A about it's not enough to have a good story but one must also write well and imaginatively -- but of course that was just an aside for a narratives context. 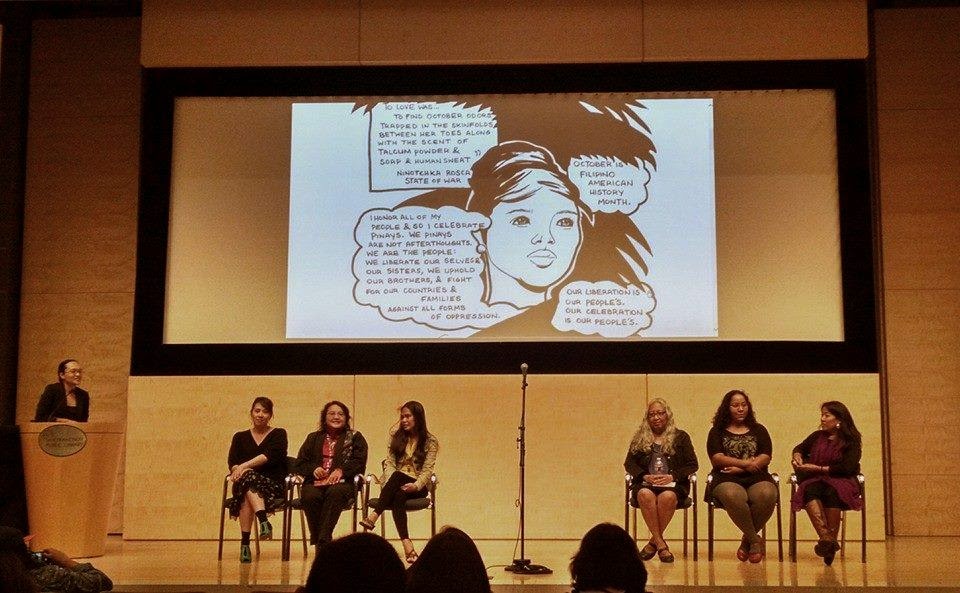 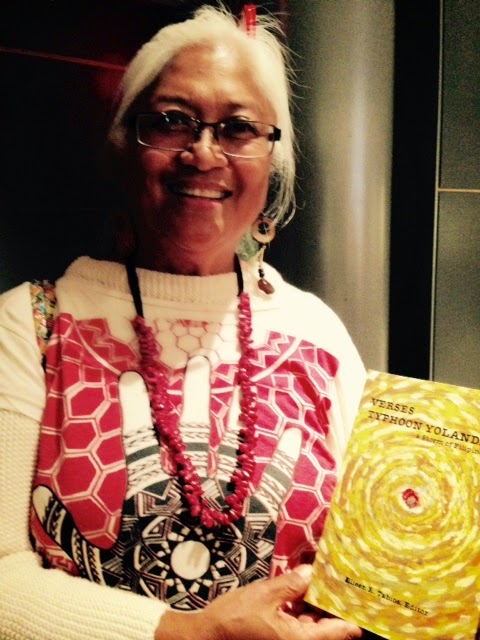 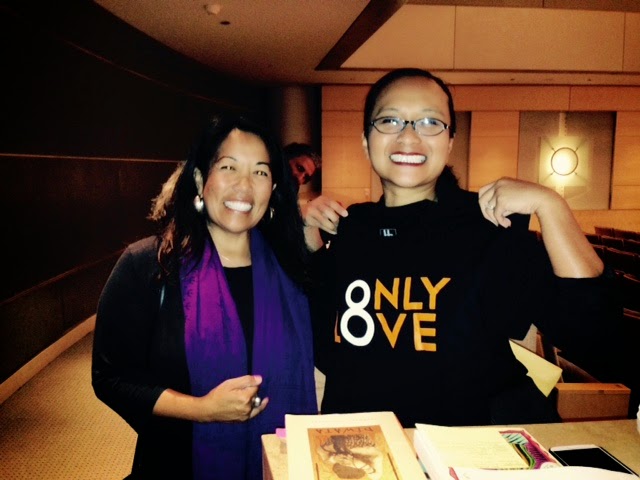 Arlene Biala and Barbara Jane Reyes--something about the Giants...

I was also moved to meet Amy Pabalan who was apparently published for the first time when I accepted one of her poems for VERSES TYPHOON YOLANDA -- it's always special to midwife that first publication.  Also moved to meet Aileen who apparently had attended some of the events I created years ago in New York for the Asian American Writers Workshop--glad to see those events resonated with attendees.  I was not moved to meet the "elder" ... actually, never mind about that one (grin).

Thanks as well to Mitch Yangson who curates the Filipino American Center for the San Francisco Public Library.