THE FIRST HAY(NA)KU BOOK IN MACEDONIAN!

Diana Petkova, a poet from Skopje, has released the first hay(na)ku poetry collection in Macedonian! Entitled Unsecreting of the light, the book is published by PNV Publications from Skopje with support from their Ministry of Culture! The book doesn’t just contain 55 hay(na)ku but another 55 reverse hay(na)ku as well as eight examples of her own variation called “hai(na)ga.” Her invention is a blend of poems with images of the watercolors of Macedonian artist Toni Shulajkovski.

Diana is a well-published writer of haiku -- I share more about her biography below beneath the images -- but learned of hay(na)ku from a creative writing course taught by Macedonian poet Elena Prendzova.  She took to the form and ended up writing the hay(na)ku poems that comprise her new book. Here are photos of the books taken during the book release on May 21, 2019 in Macedonia: 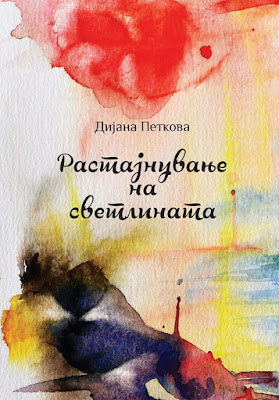 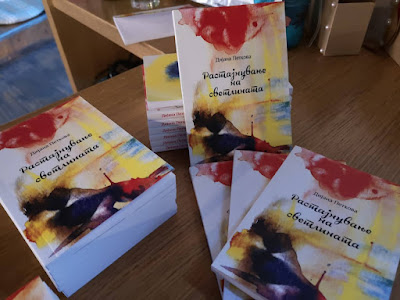 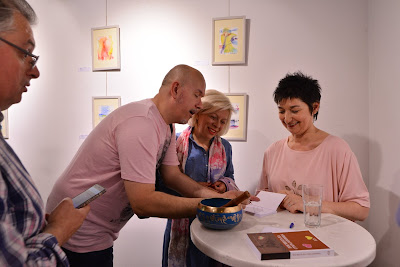 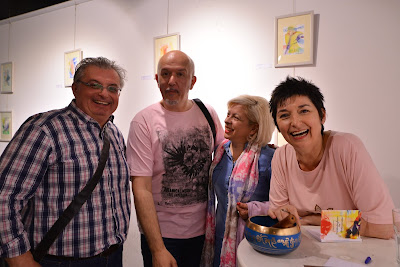 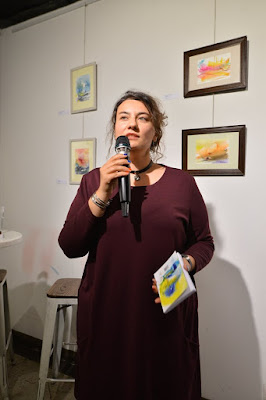 Needless to say, I'm both delighted and grateful that the hay(na)ku caught the attention of Macedonian poets!


Diana Petkova was born on 08.03.1964 in Skopje. She graduated at the Faculty of Philology in Skopje, at the department for Macedonian language and history of literature of the people of Yugoslavia.

Her poetry has been published in the magazines "Sovremenost", "Stozer" and„TEA Moderna“, and she is represented in the anthology "The heartbeat of Macedonian poetry" by Svetlana Hristova-Jocic (2012), in the collection of poetry and short stories "Surrealistic gugilipapuli" (2016) and in the e-collections: "SeMir" (2016), "Poplava"(2016),"Sneg"(2019) and "Dlankovod" (2019)https://issuu.com/associationkontext/docs

In May 2009 she introduced herself to the New York audience at MC Gallery New York with a video promotion of verses from her "Children of Silk" collection, as part of the "Influenced by the sound" exhibition of Toni Shulajkovski.

From September 2012 until 2017 she is the owner and editor of a healthy food website www.healthyfoodcorner.com where on daily bases she publishes texts in English. By showing different ways of preparing food, step by step through photos, mostly supporting the macrobiotic way of cooking in Macedonian conditions, she stimulates a healthy diet among young people.
In July 2014, she participated in a colony organized by Aurora Resort - Berovo with Simonida Filipova-Kitanovska, Kasyopeia Naumoska, Emil and Toni Shulajkovski, who paint two watercolors for the project "A particle of awareness", published in the "A Particle of awareness" book. The promotion of the book was organized in "Gallery 8" in the Old Skopje Bazaar with an exhibition of haiku poems by the author and watercolors by Toni Shulajkovski, and the verses were read by the audience.

In September 2016 in the cafe-gallery Concept 37 she promoted “What’s forlunch mom?" haiku cookbook for conscious men and women consisting of haiku, haiga with graphics by Diana Tomic-Radevska and macrobiotic recipes, as three different artistic expressions, all three originating from Japan. The event wasaccompanied by an exhibition of graphics by Diana Tomić-Radevska created for the“What’s for lunch mom?" project and also printed in the book, and by a poetryperformance with the participation of the audience.

In March 2017 she participated by reading verses from the "Stefania" collection at the festival Woman Scream, an international poetry and art festival in support of women's rights and prevention of violence against women (with a license from Spain).

In October 2017, in Salon "19:19" at the KIC, she carried out a poetic and artisticperformance "Enso • Connecting with the Whole", allowing the audience to participate, who wrote haiku poems for the first time on the spot, and with the guidance of Toni Shulajkovski each of the participants also painted their own enso-circle for the first time.18 enso paintings were presented at the promotion, all made by the author of this book.

In May 2019 in the cafe-gallery "Concept 37" with an exhibition of 32, out of 110 watercolors, made by Toni Shulajkovski for this project, she promotes the collection“Unsecreting of the light” – hay[na]ku, inverted hay[na]ku and hay[na]ga, the only such collection in Macedonia and in the Balkans.

She has organized 47 solo exhibitions of the renowned academic painter Toni Shulajkovski, and at the same time is the manager of his work. She has written these introductions in the catalogs of his exhibitions: "Another World", "Influence by the sound", "Walking through the sound", "Sigh for space", "Intergalactic reactions" and haiku for the catalog of the exhibition "A Suburb of consciousness".

In the creative center Ars Vivendi, where he works as a mentor in the studio for creative writing, she awakens the sleeping knowledge of the children and in that way she makes them aware for keeping their creative channel always open for new insights and research. Organizing 14 final exhibitions and promoting 6 books: "Free water", "Quiet powers of the spirit", "Thoughts of silence", "24/7", "Moon, breathe! and "The drowsiness of the cloud", made by children - members of this creative center, together with Tony Shulajkovski, she faces children with the beauty of their inner being.
She lives and works in Skopje.