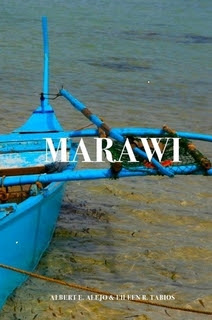 MARAWI, a recent poetry publication co-authored, with Albert Alejo, was put out as a fundraiser for relief efforts in Marawi where nearly 400,000 people have been displaced from the battle that started on May 23, 2017 between Philippine government security forces and affiliated militants of the Islamic State of Iraq and the Levant, including the Maute and Abu Sayyaf Salafi jihadist groups.[Wiki] Proceeds from MARAWI--and you can participate/contribute for a mere $5.00--will be dedicated to Laoanen's efforts to help the evacuees. Click on links for more information.

Relatedly, here’s an update on moi Recently Bought Poetry List of books by poets or about poets/poetry.

ON LOST SHEEP by Shiro Murano, Trans. by Goro Takano

YOU THEN A DANG by Hoa Nguyen

NEAR: A LUMINESCENCE by Melissa Buzzeo

THE LAST LYRIC by Yu Xinqiao, Trans. by Yunte Huang

Email ThisBlogThis!Share to TwitterShare to FacebookShare to Pinterest
Labels: Bought Books by Poets or Related to Poetry, Marawi